The Indianapolis 500 winner had to wait to finally drink the milk! The top rookie Manoz finished second and Hunter-Reay was third.

Indianapolis, Ind. – Tony Kanaan raced to victory in the thrilling 97th edition of the Indianapolis 500. And the win for the popular drive came in his 12th Indianapolis 500 and 201st consecutive IZOD IndyCar Series race. While the race ended under the caution flag, the fans were treated to a highly competitive for the first 197 laps.

Victory lane and the post-race celebration activities were very exciting, and it was obvious from the outpouring that Kanaan’s win was very popular with fans and fellow competitors.

The race was run on an unseasonably cool and overcast day with the temperature 30 degrees cooler than the 92 degree mark of a year ago.

Four caution flags slowed the race for 21 laps with two of them occurring in the final six laps. One by Graham Rahal and the last one by Dario Franchitti. 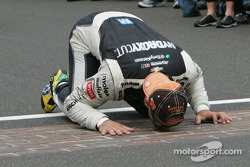 “I don’t know where to start,” Kanaan said in the post-race interview. “My car was very good, and it was one of those days where everything was so smooth. No one was yelling, and we felt that everything was under control. But in the 11 previous times I have been here, I thought the same thing. With six laps to go, I said to myself, ‘This might be my day because I have been in this position many times.’

“But then on the restart, I knew I had to get the lead because it could be the end. How life is funny with the yellow being my best friend. I could see Dario (Franchitti) in the (crashed) car and once he got out, he was waving to me. It was so special. I never had a doubt that I could win this thing. This place is so special, and today it worked. This is the biggest win ever for me.

In victory lane while awash in the traditional milk drink, he said, “This milk tastes good. I can’t believe we finally did it. It’s ours now.”

“I never won this race as a driver and couldn’t seem to do so, so I had to hire a driver to do it,” Vasser said. “Tony is the consummate professional and he’s been a long time coming here. Starting a year ago, we decided to focus on Indy by taking a chassis and putting it aside. A lot of credit goes to the boys, who have worked very hard over the winter. Tony was right, ‘the stars started lining up for us,’ and we didn’t really get a race set-up until last Sunday with two hours to go and within 45 minutes, we hit on it. We knew we had the right guy and the right set-up for the race.”

Leading up to the finish, Kanaan, Ryan Hunter-Reay, Marco Andretti and 21-year old rookie Carlos Munoz had the large crowd on its feet as the drivers waged an intense battle, a fight that stopped momentarily when Rahal crashed with six laps to go and for good when 2012 winner Franchitti crashed.

For the restart on lap 197, Kanaan forged into the lead as the tightly bunched field raced into the first turn with Munoz, Hunter-Reay and Andretti close behind and finishing in that order.

Munoz and Hunter-Reay were hoping the race would finish under the green flag, as they thought their chances for victory were strong.

About the race, he added, “At the beginning I was a little bit nervous with the pit stops and a lot of people overtook me. But I was patient and one by one I went back to the front. The last two pit stops, the guys and me, we did a great job to not lose any position. But in the end, the car was great. On that last yellow flag, I thought I had a shot to win, as the car was awesome from the first lap to the last one.”

He drove Unistraw Chevrolet, one of five cars from Andretti Autosport.

Hunter-Reay finished a disappointing third but he did express pleasure with seeing his friend Kanaan win. 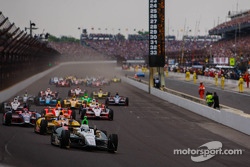 “It was awesome running up front all day and having the car to put you there,” he commented. “I could just put it where I wanted to and pass when I wanted to. We were just kind of biding our time. The frustrating part is we were quick enough and I saw (near the end) that we had traffic coming up and I thought, ‘This is great. If I can get in lapped traffic, I can distance myself because our car was great in the traffic.’

“But right as I was getting the tow from traffic, the yellow came out. We were leading and the rest is history. When you’re leading up front, especially on a restart, you might as well be driving a bulldozer, everybody can come on by. I figured we would have been shuffled back to four or more on the restart, so I’m actually happy with third.”

Andretti also was disappointed with the end result - fourth. “When we stopped for a trim adjustment, we were in the worst-case scenario, getting stuck behind some teammates,” he said. “It was fun for a while, but we just got shuffled back.”

As Franchitti sat in his wrecked car at the end, he said he was pleased to see his friend Kanaan in the lead. “It is great, just phenomenal that Tony won.”

A week from now, the IndyCar Series returns to the street course at Belle Isle Park in of Detroit.

Another A. J. seeking fame at Indianapolis