Tony Kanaan posted a speed of 183.713 mph on the .875-mile, variably-banked Iowa Speedway oval placing him fourth on the speed charts. 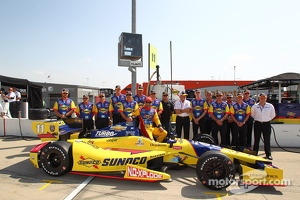 Kanaan, behind the wheel of the No. 11 Sunoco "Turbo" - KV Racing Technology - SH Racing entry, went out second of the 23 drivers to make an attempt in single-car, single-lap heat race qualifying. He posted a speed of 183.713 mph on the .875-mile, variably-banked Iowa Speedway oval placing him fourth on the speed charts.

Since he was in the top-six after the heat race qualifying he automatically was slotted into Heat Race 3, which meant he was assured of a top-10 starting position. In Heat Race 3, Kanaan started fourth and charged into second place, but about a third of the way through the 50-lap contest he began to drop back and finished eighth of the 10 cars in the heat.

Commenting on Heat Race 3 Kanaan said, "The car was good in the beginning of the race, but we developed some under-steer as the laps came in. The good thing is that we found out about the problem tonight, so we have some time to work on the situation. I am confident we will be ready to race tomorrow."

Kanaan has qualified in the top-10 five times in seven attempts at Iowa with a best starting spot of third in 2011. In six previous races he has three podium finishes all in the last three years including a victory in 2010, a second in 2011 and a third in 2012. The last two podiums were with KV Racing Technology.

Kanaan has qualified in the top-10 four times in 10 events this season with a season-high starting position of fourth in Brazil.The 2013 Indianapolis 500 Champion is sixth in the championship race with 215 points, just six points out of fifth.

Sim Iowa TD De Silvestro, driver of the No. 78 Nuclear Clean Air Energy - KV Racing Technology Chevrolet Firestone car, qualified 23rd in the single-car qualifying portion of the day placing her in Heat Race 2. The 24-year-old Swiss driver fought over-steer issues throughout morning practice as well as during qualifying, prompting the team to change the setup heading into the evening's heat races. The changes didn't improve the car enough resulting in a 24th place qualifying position for tomorrow's race.

"I'm really disappointed," De Silvestro said. "The team's been working really hard, but we've been fighting with the car since the second practice in Milwaukee. The car was great in the first practice there, but since then we haven't been able to get it back to where we need it to be.

It's really frustrating. I know it's there, because it was awesome in Texas as well. We'll make some changes again tonight and hopefully get a good car for tomorrow's race. We really want to go out and put on a good show for the Nuclear Clean Air Energy sponsors that are here this weekend. Hopefully we'll be able to do that."

There was a practice session prior to single-car qualifying. Kanaan recorded the fastest lap of the session with a speed of 184.063 mph. De Silvestro ran the 22nd quickest lap at 176.504 mph.