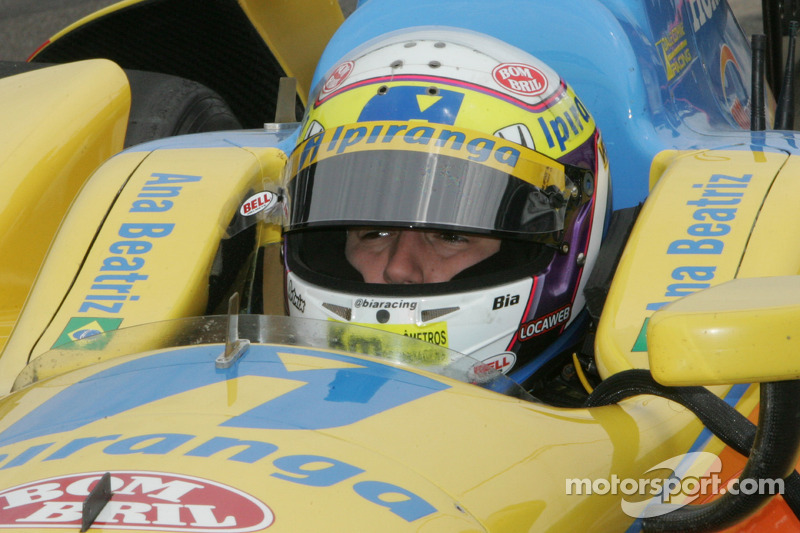 The increasing number of women driving high-power racing machines continues to grow worldwide and for this year’s running of the Indianapolis 500, there will be four lady racers to take the green flag on Sunday.

When Janet Guthrie broke the gender barrier for the Indianapolis 500 in 1976, her effort received world-wide attention. Until then, racing was a man’s world and women couldn’t even be in the pits. Since then, the world and customs have changed dramatically for the better and women are substantively involved in racing not just as drivers but as engineers, crew members, owners, officials and in just about every capacity you can name.

While Guthrie was the pioneer, it took the likes of Lyn St. James and Danica Patrick to make it commonplace for women to succeed in the sport. St. James, who has the most race starts, earned rookie honors at Indianapolis in 1992 and Patrick electrified fans and a nationwide audience when she came close to winning the 500 in 2005.

Patrick has moved on to NASCAR circles, and the baton has been passed to the likes of Switzerland’s Simona de Silvestro, Great Britain’s Pippa Mann and Katherine Legge and Brazil’s Ana Beatriz, all of whom qualified for the 2013 edition of the Greatest Spectacle in Racing.

De Silvestro is the best known of the quartet and she’s been a regular campaigner in the IZOD IndyCar Series for four years running. Switching teams in the off-season, de Silvestro has shined in 2013. Having teammate Tony Kanaan alongside has been quite beneficial to her; until now, she has been involved with single-car teams and had no one to exchange ideas with. 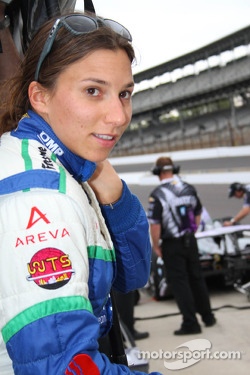 The 24-year old Swiss driver qualified 24th, and she’s eager for the race to start. “I am looking forward to Sunday and it should be fun,” she said. “The excitement is building and as a driver, you want to go racing.”

She says she has reviewed previous races, trying to learn as much as she can from videos and notes accumulated. “I go into this race, seeing how it plays out and then work from there.” A year ago, she drove an underpowered Lotus but for 2013, she has a more potent Chevrolet engine behind her. “This year is much more fun, and we are much more competitive.”

Being competitive has triggered an outpouring of fan support, which pleases de Silvestro. “It is pretty exciting and is cool, as they must like what I am doing on the race track.” she said. She also credits Kanaan with her progress on ovals. “This week, I feel like a giant sponge talking to him. I also know I have to take it step by step. I really enjoy working with him.”

With racing banned in her native country, her parents and fans have difficulty seeing her race, but many, including her father and mother, will be in Indianapolis this weekend. She believes it would benefit young people if they had a place to race.

Beatriz, 28, will be in her fourth 500, and with each one, she feels more comfortable with the speeds and the traffic. “I am still calm but come Sunday morning, I may feel otherwise,” she said. “About an hour before the race, I will start focusing in and forgetting about everything other than the race.”

She will drive the Ipiranga Honda fielded by Dale Coyne Racing.

Leading up to the race, she said she will review previous races, endeavoring to pick up things that can be done differently or better. “Whatever you can do to save time and your energy is good,” she added. “Having been here four years, I am more relaxed and confident.”

She is starting in the tenth row, so she knows she has to be careful at the start. “We cannot do magic and when you try to do magic, things can happen,” she said. “I don’t want to get stuck into the wall on the second lap. If there are opportunities, I will try to take advantage of them.” 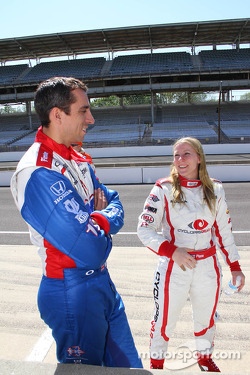 In a unique occurrence, Beatriz has two teammates, veteran driver Justin Wilson and Mann. Mann and Beatriz have similar tastes in car set-ups, allowing them to freely exchange notes.

Beatriz feels she will know about her race needs after Carb Day. “For Carb Day, I will have my new Honda engine and will see what happens with it.”

Mann, 29, is riding on a cloud with her ride, one that only came together late in the game. “I am thrilled to be back here,” she said. “It is so great to be back in an IndyCar at Indianapolis. Standing around last year just about killed me. I am so grateful to Dale Coyne Racing and Cyclops Gear.com for giving me this opportunity. It is a tough world out there with the economy to put together a sponsorship package.”

She only got into the car for the first time less than a week ago, but she got up to speed quickly. “I like the new car, and the handling is close to that I experienced two years ago with Conquest Racing. Being with a small team, we ran with the rear end moving around a bit, so the transition to the chassis where the rear moves around has made for an easier transition for me.”

Mann has been reviewing her notes from 2011 but with a year-off in between races, she finds it will be more of a challenge. “As a part-timer and still almost a rookie, I will be trying to work on many things, including my pit stops. If I was full-time, I would be much better.”

Teammates have been a big plus for Mann and the exchange of information has been an asset to her.

For the race, her goal is to stay out of trouble and be on the lead lap. “If we could somehow sneak up into the top 15, I think that is a realistic goal for me.” She intends to be conservative on the start and not take any chances.

Legge, 32, hooked up with Schmidt Peterson Motorsports at the last hour, and she’s thrilled to have landed the ride. “I am very excited about this weekend, even though the deal came together at the last moment,” she said. “They have given me a great car, and I just have to drive it. The car is very comfortable and drivable. The team has given me all the tools I need. Tenth place is a goal that I think I can reach.” 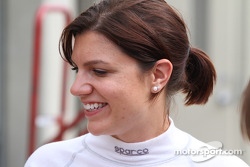 Starting from the 33rd and final starting position, Legge knows she has a challenge to overcome but she’s not overwhelmed. “There are worse places to start,” she commented. “You can just sit back and figure out what’s happening before you can start moving forward.” She did express concern about being lapped early in the race, but she plans on protecting her equipment and battling the turbulence in the early going.

With two long-distance races under her belt, she is relieved to have had that experience to draw upon. “The race really starts at the end, and you have to be ready to go. With the experience I have gained, I am more confident and relaxed.” She indicated she is benefiting from a veteran crew, many of whom she has worked with for several years in various series. “I am lucky to have these guys, and we jelled right away.”

Justin Wilson and Simon Pagenaud have given Legge numerous tips that she believes will help her.

The odds of any of the four winning the race are high, but with any luck, they can each foresee a creditable finish with more to come.

Boston Marathon participants to complete run at Indy on Sunday