Legge speaks out on her termination from Dragon Racing

Katherine Legge takes on a new fight with legal team.

"I am extremely disappointed that Dragon Racing and sponsor TrueCar have announced a replacement IndyCar driver for the No. 6 car.

The last thing I feel at the moment is 'Empowered!'

I received a letter from Dragon Racing, terminating my services on January the 18th. My legal team had asked for details regarding the reasoning for this termination but none have been provided.

I signed a two year deal for 2012/2013 with TrueCar as a sponsor, and then I took that sponsorship to Dragon Racing shortly thereafter. Jay Penske told Scott Painter (TrueCar CEO) that he would bring the Penske Dealerships onboard with TrueCar if I signed with Dragon Racing, so it seemed like it would be a good fit for all. I firmly believe that Dragon Racing and TrueCar cannot proceed without me and I will be taking legal action to protect my rights.

It was a very difficult season last year, we did very little testing and I was made to sit out of some of the races. Jay Penske's actions in Nantucket really hurt my ability to find additional and personal sponsors, and it was highly embarrassing, especially with the message that we were trying to portray regarding the empowerment of women in motorsport.

I was very much looking forward to 2013, using the experience I gained last year as a spring board for greater success.

I am in a very fortunate position to have the FIA (of which I am a Female Driver Ambassador) and Girl Scouts (STEM Ambassador) onboard with my career and I am working feverishly to put something together. However, having this happen so late in the game has made it virtually impossible. 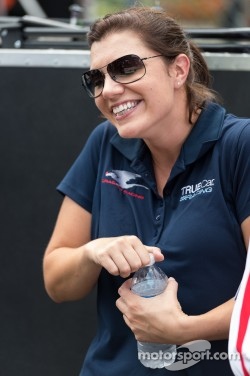 Katherine Legge with her usual smile

I am not sure where TrueCar and Virgin stand on the 'Women Empowered Initiative' moving forward. I can tell you that I feel like I have been treated very unfairly in all of this and the last thing I feel at the moment is 'Empowered!' Scott Painter told the press on numerous occasions that it was a two-year deal with me and how he believed women could race on an equal footing with the guys.

I have spent most of this off-season trying to help TrueCar mitigate their costs and bring sponsors onboard with their Initiative, having invested a great deal of my own time, effort and money, so this has come as a huge shock.

I am also not sure whether IndyCar will take a stand on my behalf. I believe that the contracts are between the Teams and IndyCar so I am unsure of whether there is anything they can do apart from lend me their support.

I have fought very hard, every step of my career, to get the opportunities that I have created for myself and I will continue to do so. I want to thank everybody for their support during all of this, it has been very tough for me to watch it unfold."