Andretti “cautiously optimistic” for Iowa – and remainder of 2018 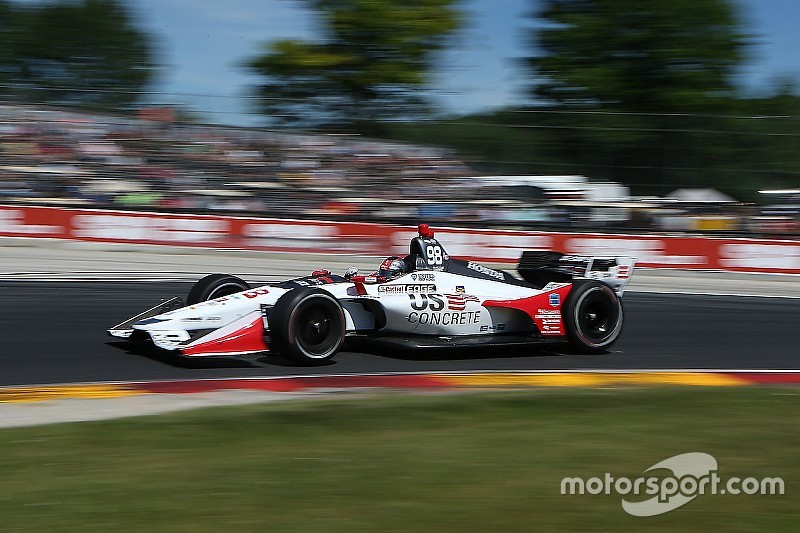 The Andretti Autosport 1-2-3-4 in the recent Iowa Speedway test has left Marco Andretti positive about his chances of grabbing a third victory at this weekend’s round.

Andretti, who took pole at Detroit and lies 10th in the championship standings, has – along with the whole Andretti Autosport team – enjoyed some of his best performances at Iowa, clocking a win and three other podium finishes. And he says that the improved feel provided by the reduced-downforce aerokit of 2018 has played into his hands.

He told Motorsport.com: “Yeah, that was an encouraging test. You don’t know the power level of the other guys [Chevrolet], but the car felt really good again.

"Like we talked about preseason, the last generation of car [manufacturer aerokits 2015-’17] just wasn’t good for me regarding feel and transmitting what it’s doing. My best results at Iowa all came before the manufacturer aerokits – so hopefully we can get back to that form. I feel back at home with the short ovals with this car.

“Having said that, we’ve got to go back and repeat our form from the test. I know the result looks good but I can tell you it was not easy to find the right setup. After our first run, the four of us got together and our eyes were all wide open… The car’s really light on downforce compared with previous years, and then there’s the bumps. The rear felt like it was just skimming from bump to bump and never really felt ‘in’ the track.

“So it took some work to get that performance… and I’d still say we’re not exactly where we need to be because our rivals are gonna come back at us – they’ll have learned lessons – and the track conditions can never be exactly the same.

“But we’re close, and I didn’t even run my last set of tires so I’m really happy with the pace. And we ran 66 laps on a set without losing too much pace so we feel pretty good, cautiously optimistic.”

Andretti said that he was similarly upbeat about the chances of the race making a compelling spectacle for the fans.

“I think there’s going to be a lot of passing, with the tires degrading from lap 30 into each stint, when drivers start to go loose or pick up understeer. It’s harder on the tire with no downforce, but whoever gets more of a handle on it is going to be looking damn good.”

Although Andretti has previously admitted he doesn’t care too much about qualifying on ovals, he says that this weekend he’ll take a different perspective – not because it’s going to be harder to pass on the 0.894-mile oval but because he because he’s hopeful of being in contention for pole.

“I think if I’m in the top five anywhere and sniff the pole, I’m going to try to be on pole. Like I said, you are going to be able to make moves here, but I think, ‘Why not win from the pole?’”

Andretti’s first-ever pole on a street course came in the first Detroit race last month, where he grabbed P1 by almost half a second. Although it didn’t result in a podium finish, Andretti said it was a reflection of the general progress he has made on road and street courses.

“Not a lot feels better than a really good lap on a street course,” he said, “and that one did feel awesome. You know when you nail it, and it was one of those laps where I didn’t have to be told I was on pole. I just knew no one could beat that.

“But it was weird because although I led the first stint, it was actually the other [Detroit] race where I had better race pace. On the Saturday, I blew the podium trying to pass Ryan for second; he got defensive, to put it lightly, and I got a bunch of tire pick-up and lost momentum so Alex [Rossi] was able to get around me.

“But yeah, I think it was still an indication of progress we’re making, and keeping on like that is going to achieve one of my goals – to bring up the bottom part of my game. The only time we’ve been out of the top 10 has been with mechanical setup issues – our pace has been decent.

“But you know, I want the top part of my game to get better as well – we need to be capitalizing on our pace. Compared with last year though, we’re leaps and bounds ahead. It’s frustrating but it’s also good that we’ve been running better than our results have shown. You can always get luckier but you can’t always just find performance.”

Optimistic about all the remaining tracks

Andretti said the upshift in his and the team’s competitiveness, as well as the 2018 kit’s characteristics, have left him rating his chances at any of the remaining rounds.

“Depending on the Honda vs Chevy battle, Pocono might be a case of salvaging what we can,” he admitted, “but I think if it comes down to balance, I think we can win. And then Toronto, Sonoma – all I can say is that I’m really happy with what Honda has given us in terms of low- to mid-range so I don’t see a weak point for us in the coming races. I’m really confident.

“I’m not making excuses about the last couple years but it was definitely a weird era. – running flat through turns where we’d normally make two downchanges! This car, feeling when it’s on edge, has made a big difference. The car’s always floating, it’s tougher to manipulate but I love that. I drive off the feel of the rear.

“OK, it’s way easier to get it wrong now in setup, too – you can’t hide a bad setup by just throwing a bunch of downforce at it. On the other hand, if you find something that works, it can be extra-rewarding.

“The extra feel has allowed me to respond to when the tires start to degrade and that’s important because they go off quicker now. That’s not a tire issue; the cars are just moving over the surface now because they’re light on downforce. That’s a good thing because you don’t want tires go from Lap 2 to Lap 50 with the same amount of grip.

“So IndyCar has done a great job this year with the aero. And I think you need tire deg to help the racing. They go off more now and we should be thanking Firestone and IndyCar for doing a great job – the tires are softer so we have more mechanical grip, and there’s less aero grip.

“Iowa should be a fun race, but I think I’ll be having fun at any of them if we’re at the front.”

What makes Iowa Speedway so challenging for IndyCars