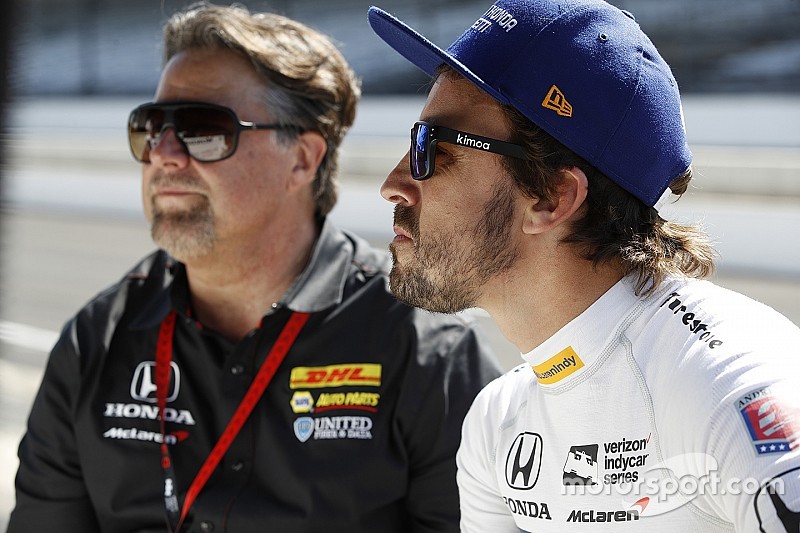 The date and venue of Fernando Alonso’s first IndyCar road course test has yet to be determined, according to McLaren, Andretti Autosport and IndyCar – with McLaren also insisting that a potential entry into IndyCar is far from resolved.

Andretti Autosport team owner and CEO Michael Andretti, who ran Alonso in the 2017 Indy 500 in conjunction with McLaren, told Motorsport.com that where and when Alonso may first test an IndyCar on a non-oval is “not yet decided.”

This was apparently verified by Jay Frye, IndyCar’s president of competition and operations, who says he has received “no notification of an Alonso test.”

One complication regarding any future collaboration between McLaren and Andretti Autosport is that Honda Performance Development president Art St. Cyr claims HPD has been “operating near maximum capacity” supplying 12 fulltime IndyCar entries this year.

Therefore, McLaren may have to run Chevrolet engines should it enter the series for anything more than another ‘one-off’ Indy 500 entry.

A tie-up with Chevy could possibly involve taking over the Harding Racing program, which is known to be struggling financially, or partnering with Ed Carpenter Racing. However, Carpenter himself told Motorsport.com on Wednesday that he’s not even thinking in those terms “because the whole McLaren to IndyCar situation seems really fluid right now.

“Personally I think they’re still trying to decide what they want to do and how to do it, so until they figure out their side, it’s hard to know what will happen. I’m more focused on finishing out our season and getting deals done with our guys [Spencer Pigot and Jordan King], than any potential new projects that are full of speculation and unknowns.”

However, Motorsport.com has it on good authority that there is a provisional plan in place for Alonso to test the Harding Racing-Chevrolet at Barber Motorsports Park on September 5 but that, despite the apparent conflict of interest between engine manufacturers, it will be an Andretti Autosport-run test.

Meanwhile Tim Bampton, McLaren’s communications director, appeared to underline Carpenter’s read on the situation – that no firm decision regarding the 2019 season has been made by either team or star driver.

“We’re not confirming anything regarding Fernando, IndyCar or McLaren involvement, for the simple reason that no decision has been taken,” Bampton told Motorsport.com. “We’re not going to give a running commentary on our IndyCar evaluations nor whether or when Fernando is testing.

“Honestly, our stance remains what we’ve said the past couple of months, which is that we’re going to continue to evaluate IndyCar but our prime focus is on Formula 1. There’s been a lot of noise about IndyCar but we don’t want to further contribute to that; when we’ve got something to say, we’ll say it. The team still needs to make a decision.”

Although Bampton wouldn’t comment on the subject, Alonso is intrinsic to any McLaren decision to enter IndyCar next year. Both Will Power and Scott Dixon were approached by McLaren, but as possible teammates to Alonso, rather than alternatives to the two-time Formula 1 champion.

Now, however, each has signed a multi-year agreement with his current employer, Penske and Ganassi respectively.

Bampton did, however, state that any possible commitment to IndyCar by McLaren would be a long-term one.

He continued: “As think I said before, if we were to enter IndyCar, it wouldn’t be just to give Fernando something to do! It would be a long-term commitment because we believe in the series and because the U.S. market is an important one for the McLaren Group as a whole.

“I know the situation is frustrating for people, for fans, but there are many permutations. First and most important is, do we do IndyCar at all? Then, do we do just the Indy 500 next year and delay a fulltime campaign until 2020? Do we come in fulltime next year? Is it just Fernando that we enter, or is it Fernando plus one?

“I can assure you that nothing has been confirmed so anything else that’s out there is purely speculation.”

Despite a watertight FIA World Endurance Championship contract with the Toyota LMP1 team up to and including next year’s Le Mans 24 Hours, Alonso would not need to miss any IndyCar races on the 2019 calendar.

The WEC’s 2018/19 superseason includes next March’s Sebring 1000km which takes place the weekend after the opening round of the IndyCar season at St. Petersburg, the 6 Hours of Spa-Francorchamps which will be held on the first weekend of May, the weekend before the Grand Prix of Indy, and Le Mans which will again fall between IndyCar’s rounds at Texas Motor Speedway and Road America.

Schmidt hopeful for Wickens, calls for barrier changes on ovals