Tim Cindric, Team Penske president, believes Scott McLaughlin has as good a chance to win the Indianapolis 500 as any rookie has ever had.

Rookie Indy 500 winners are rare with only four newbies achieving the feat in the last 60 years – Graham Hill in 1966, Juan Pablo Montoya in 2000, Helio Castroneves in ’01 and Alexander Rossi in 2016.

But three-time Supercars champion McLaughlin has been strong in the #3 Team Penske-Chevrolet in his first six races and took second in his first oval race at Texas Motor Speedway at the start of this month.

Motorsport.com asked Cindric how he rated McLaughlin’s chances of becoming Penske’s second rookie winner after Castroneves, and what experiences the New Zealander hasn’t yet encountered that could keep him away from Victory Circle.

“I think it's really hard to answer that question until you see a rookie of any kind go through the whole qualifying process, because it's different than anything they've ever done before, the four-lap average and the conditions that we'll have and the falloff that you have during those runs, depending on how aggressive you are.

“I guess the only thing we've really said to Scott is just try and worry about the things you can control. He's a racecar driver. He's a winner. He's had a taste of oval racing at Texas, obviously, and he responded to that quite well.

“It's a long race, but yet it seems really short sometimes. Simon [Pagenaud] was talking about his [win in 2019] where if you're sitting in my shoes, you're wondering why he's leading so many laps, but he's learned that there's times when that's the right thing to do, depending on what car you have … He wasn't going to have enough fuel to make it happen until there was a caution, and it all came at the right time, and he took advantage of that.

“I think Scott has as good a chance as any rookie here has ever had. But… you can't really put a value on the experience around here. Yeah, he's with our team for a reason.

McLaughlin himself said that despite his vast experience in Supercars and taking part in the Bathurst 1000, “not one of those things prepared me for [IMS]. It's a unique beast.” However, he also admitted he knows a Penske-Chevrolet can take him to Victory Circle.

“No one puts more pressure on me than myself; I've always run by that,” he said. “I'm in a car that certainly can win the race. I'll be right there.

“But I've got to work on my timing, I've got to learn this, I'm trying to learn it at a very fast rate, understand the mountain that I've got to climb to be in that bracket, buy my ticket to that last stint.

“At the same time, I back myself to learn as much as I can at a fast rate, and I back the team that I have around me. Yeah, I don't think anything is impossible. I think we can for sure give it a good shake, and if the opportunity presents at the end to take it, I back myself to take it when I need to.”

McLaughlin also paid tribute to the man who has served as his mentor since he arrived in America last October, four-time Indy 500 winner and three-time IndyCar champion Rick Mears.

“Having Rick in the garage is such a fantastic morale boost, and he's such a nice guy. For a guy that's done it all in IndyCar racing, to lend a hand and really just simplify a lot of things, especially when things are coming at me very quickly, especially these last few days, he's even [suggesting] little changes just in terms of car setup to make sure I'm comfortable before I go out, and that was in the first day. We made a really good change before I went out, and it worked out really good, and I gained a whole heap of confidence from it.

“To have a guy come in like that, talk about lines, he calls them patterns, get my timing right, it's a really cool thing and very unique, and I'm really taking it in my stride as well as everyone else on this table.”

Asked what’s the best piece of advice he’s received from Mears, McLaughlin replied: “‘Trust your ass. Feel the car.’ Sorry, but that's literally the best piece I've ever had. Trust it. If something doesn't feel right, come in. If it feels good, play with it, get used to it – the front bar, the rear bar, the weight jacker. 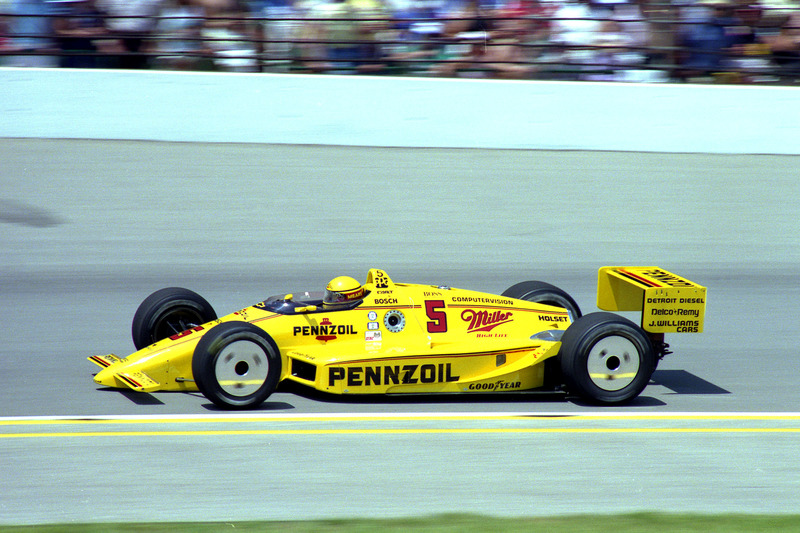 The Penske PC-17 Chevrolet of Mears on his way to Indy victory in 1988, the third of his four wins at IMS.

IndyCar championship leader Will Power has kept his cool even better than has been portrayed in public, according to his strategist and Team Penske manager Ron Ruzewski.

All you need to know ahead of the 15th of 17 rounds in the 2022 NTT IndyCar Series, the Bommarito Automotive Group 500 at World Wide Technology Raceway.

Castroneves on 2022: Difficult to teach an old dog a new trick