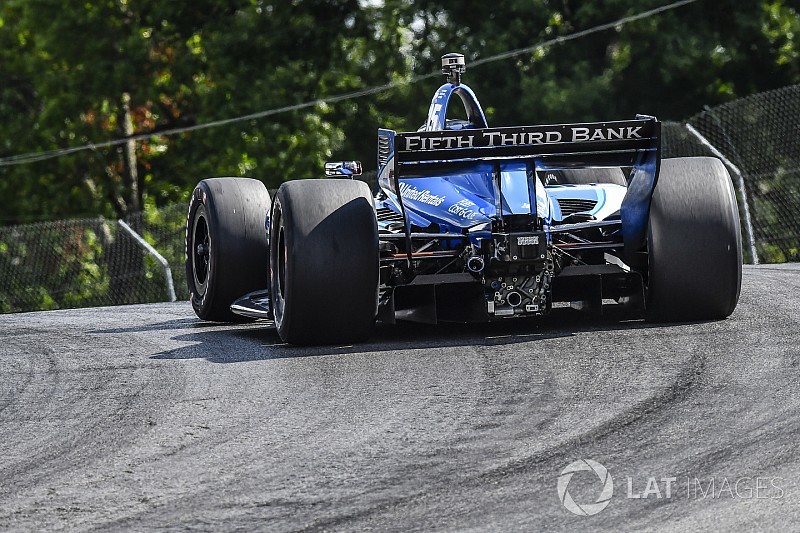 Power had been on a potentially better lap when he had to abandon it for the third and final red flag in the session.

Pietro Fittipaldi caused the first red flag, burying his Dale Coyne Racing-Honda in the Turn 2 Keyhole sandtrap after 10mins, and just after he’d moved into P2 on the times. He was bumpstarted and returned to pits, dropping sand.

He returned to the track but finished the session 23rd out of the 24 cars, 1.68sec off the ultimate pace.

AJ Foyt Racing’s Matheus Leist went light over the crest at Turn 9 and spun backwards, making right-front contact with the wall, bringing out the second red, and requiring his car to be carried back on a hook to the paddock.

Then Simon Pagenaud entering Turn 12 and Spencer Pigot exiting Turn 1 simultaneously had incidents that required the red flag, the former nosing his Penske-Chevrolet into the tire barrier, the latter spinning backward and requiring a bump start. Pagenaud’s car returned to the paddock on a crane.

That left supposedly just 45sec in the session, but IndyCar allowed one timed lap for all cars that left the pitlane expediently at the drop of the green. Given the time it’s been taking to warm the tires up here, one lap wasn’t enough for anyone to improve their time, thus Pagenaud’s sixth place stood. He was a quarter-second off Rahal, and just behind Alexander Rossi in the fastest of the Andretti Autosport-Hondas and Chip Ganassi Racing’s five-time Mid-Ohio winner Scott Dixon.

Sebastien Bourdais was seventh ahead of top rookie Robert Wickens of Schmidt Peterson Motorsports-Honda, while Takuma Sato made it two RLLR cars in the top 10. Another rookie and local driver, Zach Veach, grabbed 10th spot.