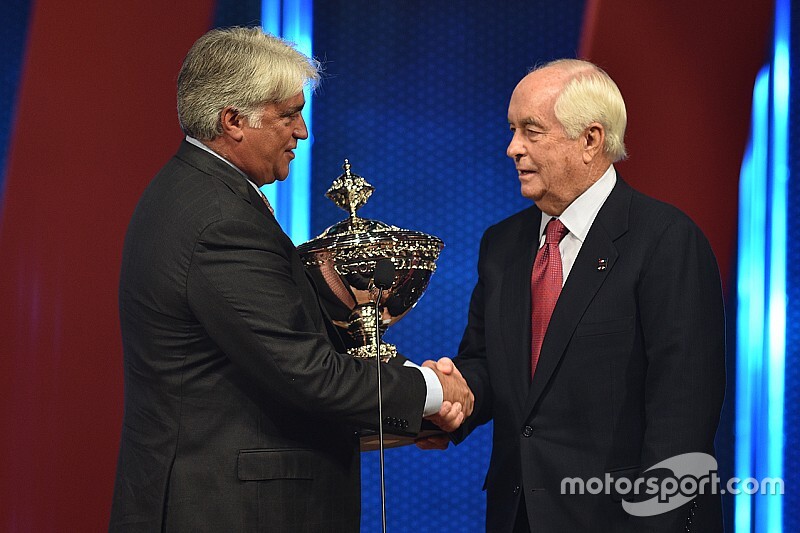 Mark Miles, CEO of Hulman & Co., will continue to play a key role in the future of IndyCar, the Indianapolis Motor Speedway and IMS Productions once Penske Entertainment completes its purchase of these assets.

Miles, who became CEO of Hulman & Co. in December 2012, was part of Monday’s stunning announcement that the Penske Corporation was to take over the Speedway, the IndyCar Series and IMS Productions under the banner of Penske Entertainment.

However, there remained some speculation as to whether Miles would remain with Hulman & Co., or join Roger Penske’s new venture and remain a steward of the sport.

Miles told Motorsport.com: “I don’t know what my next business card will look like from a branding point of view but I believe Roger wants me to stay and keep doing what I’m doing.

“Just to explain, what pertains to racing within Hulman & Company is IndyCar, Indianapolis Motor Speedway and IMS Productions. It also includes a bunch of real estate within Indianapolis that is relevant to the Speedway and IndyCar. But in addition to that, Hulman & Co. also owns assets that have nothing to do with those three businesses – real estate in Terre Haute, IN., some mineral rights related to the properties that the Hulman family has owned, interests in companies that do mining, etc. I don’t want to go into details.

“So what will happen is that before we close the transaction, those assets that don’t have anything to do with IMS, IndyCar or IMS Productions, will get spun out into a new company – a family-owned company – and then Hulman & Co.’s motorsport-related assets get merged into Penske Entertainment. And probably that day, Penske Entertainment will quit calling its latest purchases Hulman & Co., and instead the new family-owned company comprising the non-motorsport assets may very well pick up the Hulman & Co. brand name.

“I hope that clarifies it!”

Asked if his decision to remain on the motorsport side suggests he is the CEO of Penske Entertainment, Miles replied: “I don’t know what the job title will be, but I will be doing what I’m doing now, taking care of the same motorsport assets I’ve been taking care of.”

Despite a 15-year tenure as head of the ATP tennis governing body, and host committee chairman of Super Bowl XLVI at the Lucas Oil Stadium in Indianapolis, Miles admits that his time as CEO of Hulman & Co. has seen him become a motorsport fan. There was therefore “no question” that following Penske Entertainment’s takeover of IMS, IndyCar and IMSP, he wished to retain a key role in U.S. open-wheel racing.

“That is absolutely true, I’m a fan,” he said, “and in addition I’m really looking forward to working for Roger and trying to see how far we can take IndyCar and how fast. I think this deal is the best possible one for the sport, and for me personally it’s going to be an incredible journey.”

Asked which achievements he’s most proud of across seven years in his current role, Miles said: “One, I think we’ve built an excellent team of people across all aspects of the business that have created a high-performing organization. Two, IndyCar has grown from a situation where people wondered if it was even going to be around or if it would come apart at the seams due to a lack of alignment in thinking and a lack of confidence between stakeholders and management. Now it is a well aligned organization that is growing. Three, we’ve managed to take what was seven years ago, an excellent level of competition and make it even better, while at the same time prioritizing cost containment for the teams. Four, both at IndyCar and IMS we’ve added a number of terrific sponsorships that have helped economically and in terms of activation. Five, at the Speedway we took full advantage of the 100th Running of the Indy 500 in 2016 and showed everybody what the event represents at its best, and been able to sustain that momentum in attendance. Six, we’re delighted to have cemented a comprehensive relationship with NBC – and that’s a benefit to both IndyCar as a whole and IMS – and I think it can be an even bigger success in the future.”

What’s next – the priorities under Penske

With discussions over IndyCar gaining a third OEM in hand thanks to IndyCar president Jay Frye, Miles and Penske have spent the last two days in Indianapolis discussing the future of U.S. open-wheel racing, and while Miles was understandably reticent about specific topics, he gave more than a hint regarding Penske Entertainment’s plans.

“If you’re asking what are the priorities, the broad answer is ‘Everything’!” chuckled Miles. “As you know, Roger is absolutely meticulous about details and nothing escapes his gaze. Everything matters when it comes to growing the sport and the success of the business. It’s natural to try and home in on two or three things as top of the agenda, but honestly, the reality is that we’re going to be cleaning out closets and looking at everything within the companies, from top to bottom.

“I would say that Roger’s really looking for near-term opportunities, beyond the aeroscreen, to improve safety. At IMS, he’s looking for ways to start improving the fan experience as quickly as possible. Some things will take time but there are some things we can improve as soon as next May.

“And then for IndyCar we’re also exploring possibilities for the race schedule, looking ahead two or three years. Roger is open to careful selection of a very limited number of international races if they meet certain criteria – in simple terms, if they add to the success of the series for all the stakeholders.”

Miles caused some controversy when he shortened the IndyCar schedule to avoid TV clashes with the NFL football season. The extreme cases were 2014 and ’15 when the series lasted just five months – final weekend of March to final weekend of August – although in the latter instance that was due to the cancellation of a Brazilian race in early March.

Since then the NTT IndyCar Series schedule, currently comprising 17 races, has expanded a little so that it now stretches from the second weekend in March to the third weekend in September. However, Formula 1 runs from mid-March to the last weekend in November/December, MotoGP from mid-March to mid-November, IMSA from late January to mid-October, and NASCAR from mid-February to mid-November. By comparison, therefore, IndyCar goes dark for a long time, and while Penske puts great stock in the philosophy of ‘date equity’ – whereby fans come to expect a certain race at a certain time each year and plan accordingly – the shape and/or length of the season would seem to be a potential bone of contention between Miles and Penske.

Miles responded: “I think he’s broadly in agreement with what we’ve done. Keep in mind the starting point is how many races we want and if you’re not talking about adding a race you’re not likely to expand the schedule. Saying that, if we’re looking for an international opportunity then February is the logical time to have it for promotional reasons as much as anything, and the result is that can lengthen our season but adding at the front end, post-football season.

“So I think we’re pretty aligned in what we think about that. We’re not looking to go further than September. We’d like to find a way to start in February, either with the same number of races to make the schedule ‘less densely packed’, to use your expression, or maybe by adding one race if it were international, but again trying to achieve better spacing between events.”

Miles related that an Indy Star survey asking readers what they thought of Penske taking control of IndyCar and IMS evoked a 92 percent positive reaction, but said he wasn’t that surprised.

“Roger is the perfect steward to take the sport forward,” Miles commented. “He’s got all the history, all the perspective – not just of open-wheel and IMS but all aspects of motorsport all these decades. He’s a true racer, he can talk engines, he knows everything there is to know about owning and running successful racecars and getting the best from his drivers. But he’s also an incredibly successful businessman who knows how to execute.

“We know of no one better suited to take charge.”

Why Roger Penske will transform IndyCar and Indianapolis Speedway

Palou: “The only one on the grid that has never raced an oval”