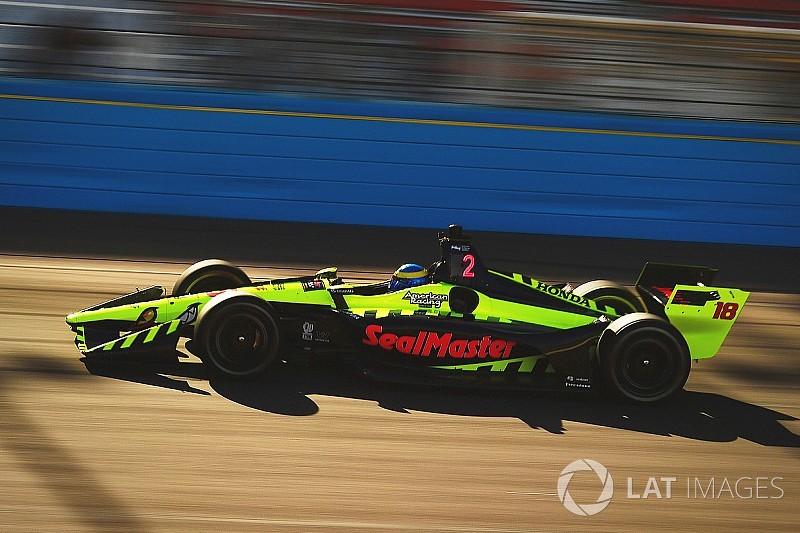 The 36-time Indy car race winner scored his most recent oval success with a blistering drive to victory at Milwaukee in 2015, but says the 1.022-mile ISM Raceway in Phoenix, with IndyCar’s new-for-2018 aerokit, is very challenging.

“We definitely made some improvement to the SealMaster Honda car,” said Bourdais. “I was quite a bit more comfortable on new tires.

“We still had work to do tonight to see how it was going to be on long runs, but I think everybody is struggling with the same thing as far as tire degradation. It's just very low downforce and that is going to dictate how much degradation you get.”

The four-time Champ Car title winner, who completed 240 laps over the two-day 12 hours of track time, was only 20th fastest in the final three-hour session, despite completing 92 laps. However, combining all four sessions, his best effort put the newly named Dale Coyne Racing with Vasser-Sullivan #18 car in 11th overall.

Bourdais added: “At least we got some performance out of one lap. We still have a little bit of room to go and I can do a little better on my own, but we are heading in the right direction.”

Bourdais' teammate Pietro Fittipaldi, who will race the #19 Paysafe car in seven of the 16 IndyCar races in 2018, recorded 285 laps over the two days at Phoenix, and eventually edged wild Brazilian compatriot and Matheus Leist to claim the fastest lap from a rookie in that final session. Leist marginally took rookie honors on the combined test results – as he had in the rookies-only test on Thursday. Still, Fittipaldi was less than three-tenths slower than the test's ultimate pacesetter Takuma Sato.

He said: “Like yesterday, the team is doing a good job and helping me get up to speed. We're trying different things so I can see what the changes do on the oval, especially on the longer runs when you have used tires to simulate a race run. And we also ran a bit in traffic.

“I think we made a good step forward in this [final] session and I was happy with my progression over the three days of being in the car. I can't wait to be back here in Phoenix in April.”

The Coyne team’s next test will be on March 5 for a one-day/two-car test at Sebring. However, alongside Bourdais it will be Zachary Claman De Melo in the #19 car, ahead of his second IndyCar race – and first with DCR – at St. Petersburg. Fittipaldi’s IndyCar race debut is at Phoenix’s ISM Raceway in the second round.

Sato, Power on top again in Phoenix, as Dixon shunts