Montoya knows the Long Beach street circuit well, but a lot of things have changed for him and racing over the course of the last 15 years.

Long Beach, Calif. – Not surprisingly, Juan Pablo Montoya continues to be the center of attention wherever he goes, and his return to the Verizon IndyCar Series has served to heighten the focus on him. At media day prior to the Toyota Grand Prix of Long Beach, Montoya held court for the assembled reporters and didn’t duck any questions.

Montoya knows the Long Beach street circuit well, having dominated the 1999 race and besting Dario Franchitti by 2.8 seconds. But a lot of things have changed for him and racing over the course of the last 15 years, and he’s up for the challenge presented.

The TGPLB will mark Montoya’s second open-wheel comeback race, and he says he is slowly coming to grips with the Indy cars. “I am going to run the wheels off these cars, and I want to make it happen as quick as possible” he said. “Even if I am a little bit behind, the (Team) Penske cars are more competitive than they were last year. I did a lot of work with the team over the winter, and I think I helped them a lot. In a funny way, that’s my job.” 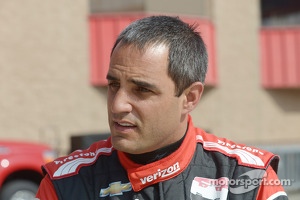 In getting up to speed, Montoya has been working on his conditioning, losing a dozen pounds in the process. “You have to lose weight to drive these cars, something I didn’t need to do in NASCAR,” he commented. “In NASCAR, it is hard to lose weight. Even when you are sitting in the bus, you are watching television and eating.” He indicated continuous bike riding has made the difference.

According to Montoya, the decision to return to IndyCar came about “because I wanted to be in a winning car, and I can’t ask for a better winning car than a Penske (car).” As has been stated many times over, Montoya and Roger Penske have talked about getting together over an extended period of time, but the right time didn’t come about until a few months ago.

Montoya took his first run with Team Penske at the season opener in St. Petersburg two weeks ago. He qualified 18th and journeyed to a 15th- place finish. “The results do not reflect how good we were,” the Colombian said. “We had a bad qualifying effort and we were too aggressive on the race set-up, screwing ourselves. My biggest thing coming out of St. Pete was that I could look at my pace and feel competitive speed-wise.

“I haven’t been side-by-side with anybody in an open-wheel car and out-braked anyone in 10 years. In F1, it was a big deal if you passed three cars in a whole year, so here everything is so new, you just have to figure it out again.”

Asked if he was comparing his debut race to his previous accomplishments, Montoya was quick to point out, while waving his hands, “I am looking forward and not at the past. What’s behind shows what I can do, and what’s in front is what I am going to do.”

Having regained his comfort level, Montoya is optimistic for this weekend’s TGPLB. “I am putting a little bit more pressure on regarding my performance, and I am encouraged (with what I see). I have been here and know the track, so time will tell,” he said with confidence.