Munoz gets to work after joining Andretti team

"Just another day at the office, eh?" James Hinchcliffe offered as the 21-year-old Colombian prepared to test for the first time as a full-time member of the Andretti Autosport team at Sebring International Raceway.

It didn't matter to Munoz that his car was unnumbered. He pointed to his name below the Colombian flag on either side of the cockpit. 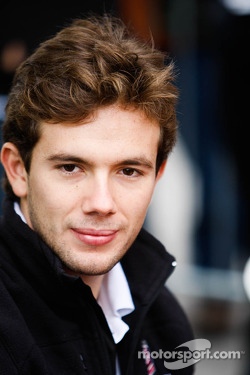 Munoz, who placed third in the Firestone Indy Lights championship this year and competed in three IZOD IndyCar Series races, will drive a Honda-powered car in 2014 alongside Hinchcliffe, Marco Andretti and Ryan Hunter-Reay, who was testing the new twin turbocharged 2.2-liter V-6 at Sebring.

"I was in the car once during the Toronto weekend, and everything was sort of new for me today again," Munoz said. "My main goal was to make sure the seat, the pedals, everything was OK. I'm really happy that Andretti Autosport has given me the opportunity. Not a lot of rookies get to go up with a top team.

"I have to work a lot, but I'm ready for it. My first goal is accomplished. To be a part of this team, they believe a lot in me, and to pay them back would be to bring them great results."

Munoz made his series debut in the 97th Indianapolis 500 Mile Race, in which he started and finished second and earned Rookie of the Year honors. He also competed in the second race of the Toronto doubleheader as a fill-in for Ryan Briscoe (fractured wrist in Race 1) for Panther Racing in addition to competing in the Firestone Indy Lights race, and also did double duty at Auto Club Speedway as the substitute for E.J. Viso.

Overall, he recorded four victories (two each on road/street courses and ovals) and five pole positions in the 2013 Firestone Indy Lights season.

"Carlos stepped up this season and showed outstanding potential on track in Indy and Fontana," team owner Michael Andretti said. "We are looking forward to welcoming him as a full time IndyCar driver and seeing what 2014 has in store. We are confident that his success in Indy Lights will carry on into his IndyCar career."

Garrett Mothersead, who worked with Munoz for the Indy 500 program, will be his race engineer.

"We worked together at Indianapolis and connected," Munoz said. "He told me when I needed to push and when to hold back. I learned a lot that month, and I also learned from my experienced teammates at Toronto and Fontana. They always tried to help me.

"I don't have the words to express right now how I feel. After so many years of racing and all the sacrifices -- leaving my family in Colombia and going to Europe to race, then coming here to the U.S. -- but finally, I'm a professional race car driver in the maximum category in America."

Luyendyk, 32, a former Firestone Indy Lights competitor, is intent on competing in the 2014 IndyCar Series season.

"I would have done it a lot sooner, but economically it was tough for a few years to raise the funds to go racing," he said. "But now I feel like I'm in a situation where I'm very marketable and I've always wanted to be back in an Indy car. The goal is to run next year, hopefully a full schedule if we can find the partners, and if not I would love to be back for the Indy road course race and the '500.'

"I've never lost the passion. I've always stayed close to INDYCAR, driving the two-seater or being in the TV booth. When I went to Indy this year I mentally told myself I'd be back the following year. This is a good first step."

Luyendyk began racing in go-karts in 1992 and has competed in various series from Formula Ford to USF2000 and the A1GP. He finished second, third and fourth in the Firestone Indy Lights championship. The test was his first time in an IndyCar on a road course.

"It's my first opportunity with carbon brakes and paddle shifting since I did A1GP so there's a lot to get used to because the last time I was in an open-wheel car was 2010," he said. "Physically, it's a lot tougher than I accounted for, but I'm learning every lap, the crew has given me a great car and it's a great start to a relationship."