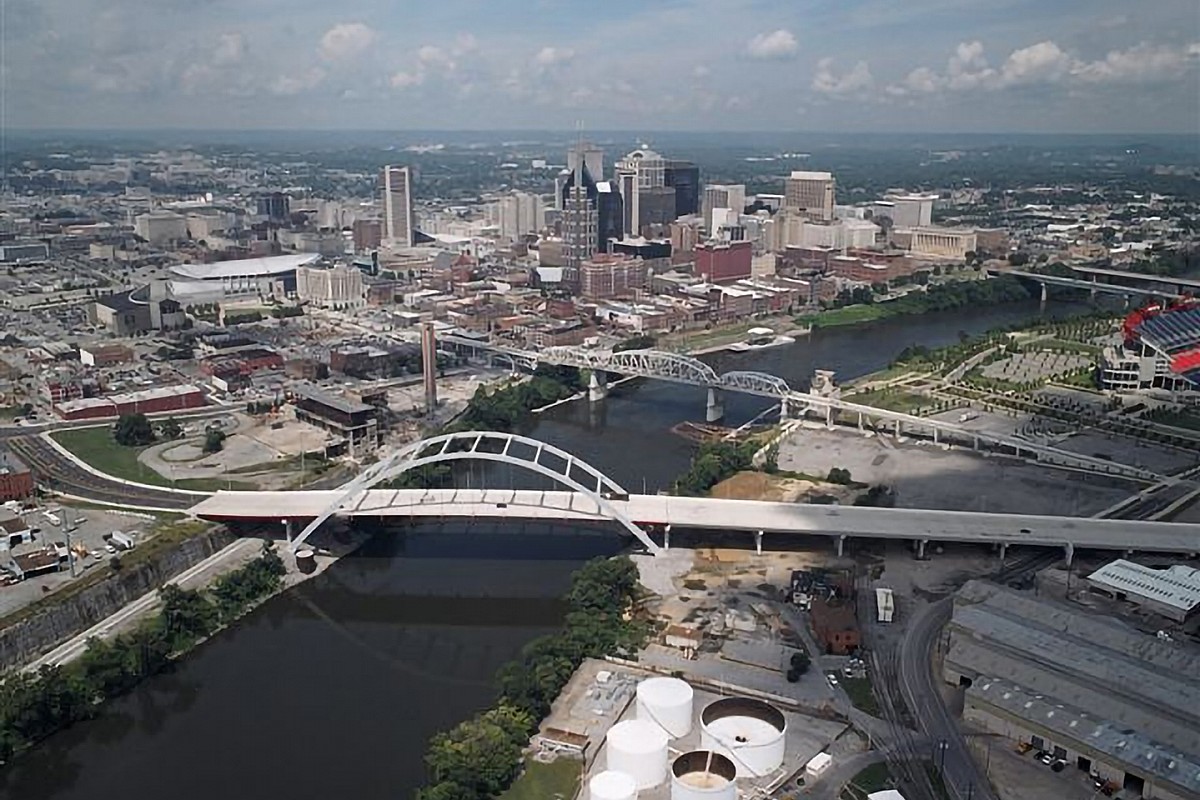 Track designer Tony Cotman believes the new Nashville street course has a long-term future due to local enthusiasm and is also truly unique. He told David Malsher-Lopez what makes the venue special.

The Music City Grand Prix, which yesterday was confirmed on the 2021 NTT IndyCar Series calendar, will be held on a 2.17-mile course that includes a bridge crossing over the Cumberland River, and races past the Nissan Stadium, home of the Tennessee Titans.

Cotman’s NZR Consulting company, which designed and developed several street courses for Champ Car and IndyCar, had been working on a street race layout in Nashville for several years. However, restrictions imposed by previous administrations meant there was no way to use the bridge that comprises Korean Veterans Blvd.

“The compromise idea that avoided the bridge wasn’t satisfactory,” says Cotman. “It was too tight so there was nowhere for an IndyCar to really stretch its legs and look quick. It was not very interesting – a non-starter.

“Once the current administration declared the bridge was usable, that was the game changer. And it’s one of those landmarks where you see that bridge on TV or in photos and you’re going to know exactly where it is. It’s like seeing the Queen Mary in the background at Long Beach.

“This is completely different from any other proposal we came up with before – and no, a couple of people have asked whether the layout is supposed to look a bit like a guitar or a musical note, but actually that’s just the way it turned out. A happy coincidence!”

A talk around Nashville street course 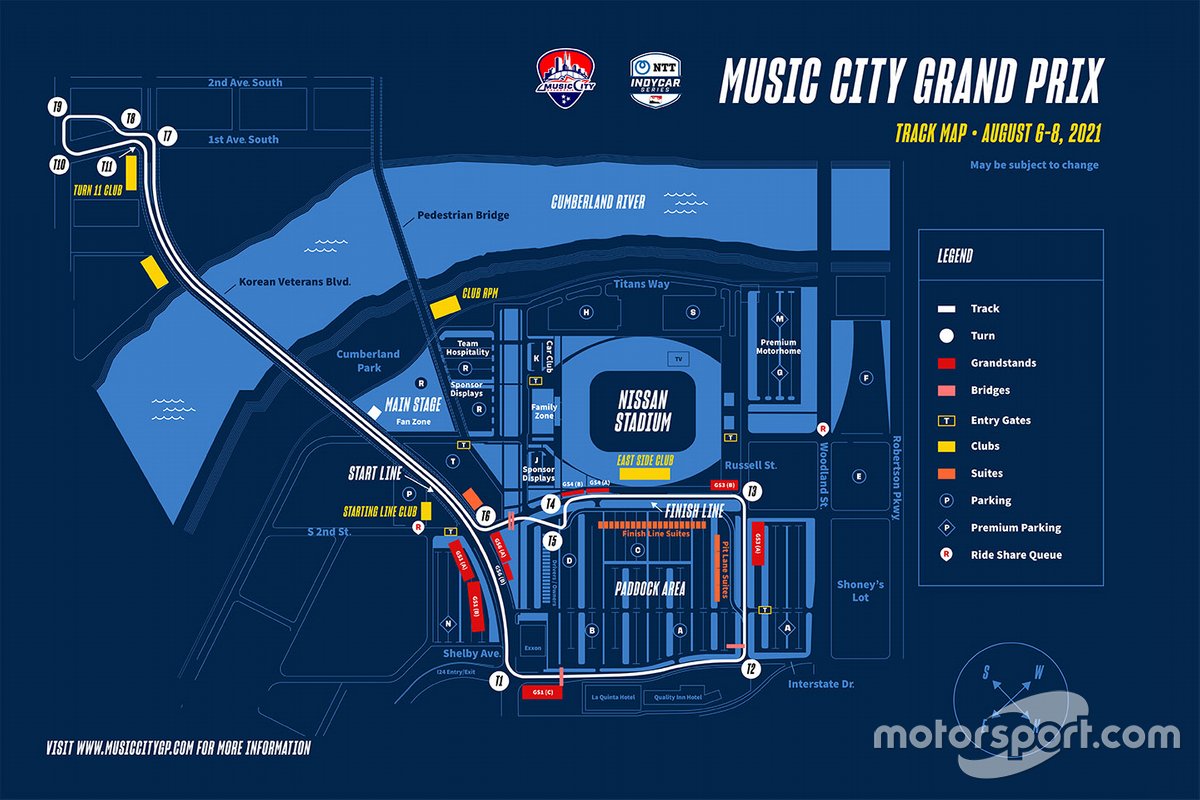 Explains Cotman: “Drivers come down off the bridge into Turn 1 and the barriers will be moved all the way to the outside, so the braking/passing zone into there is 80 feet wide. Think back to the old Cleveland course and that’ll give you some idea! There was the room to do it and it’s fairly smooth there, so why not let them go multiple cars wide?

“You can see by where the grandstands are located that we’re expecting Turn 1 to be where a lot of the action is. With a long drag from the final turn and over the bridge they’re going to be going at high speed, drafting, and they’re going to be enticed to have a go.

“Along to Turn 2, there’s a very gentle S past a couple of hotels, nothing trick to it, but as you exit Turn 2 you go up over a little rise – on the left is the pit entrance – and then downhill again to Turn 3. That’s probably the tightest part of the track, from Turns 3 to 4, in front of the Nissan Stadium.”

Just as Mid-Ohio Sports Car Course begins its IndyCar races on the third straight, with Turn 4 serving as the first turn for the opening lap, so too the Nashville race will start and end in different parts of the course.

“Yeah we wanted the finish to come in front of the Nissan Stadium,” Cotman says. “No point putting it out with start zone because there’s no grandstands at that point. So the checkers will get waved outside the stadium, where the Club Suites will be.”

There’s a tight left-right at Turns 4 and 5 to slow the cars down – they really have to slow down for the left-hand part because I’m trying to match the speed of the cars coming out of the pits at the apex of T5. The pit entry is just after Turn 2 and sweeps around on the inside of three, and pit-out is at T5.

“Then you accelerate briefly down to Turn 6 which is quite a sweeping corner and then you’re onto Korean Veterans Boulevard so the cars are accelerating hard here all the way over the bridge and there’s a slight right curve as the cars come around to set up for Turn 7 into another quite wide braking area.

“Turn 7 is a 90-degree corner and then the cars are accelerating through Turn 8 which is a quick S, up to Turn 9 which is the highest point on the course. There’s a 60ft difference between the highest to lowest point of the track and this Turn 9 is just a little bit higher than the bridge.

“Then the cars accelerate to a small sweeper onto 1st Avenue and then there’s a right-hander onto the bridge again. The cars then accelerate hard all along the bridge and down to Turn 1 and hit the brakes pretty hard. Think how well IndyCars can overtake down into Turn 4 at Mid-Ohio, and remember this is going to be twice as wide as that.

“So I reckon Turns 1, 2 and 7 are going to be the prime passing spots. If you don’t get through Turn 1 properly, you are going to get passed in Turn 2, and if you don’t get onto that long straight out of Turn 6 properly, it will cost you all the way down to Turn 7 which is another hard braking zone.” 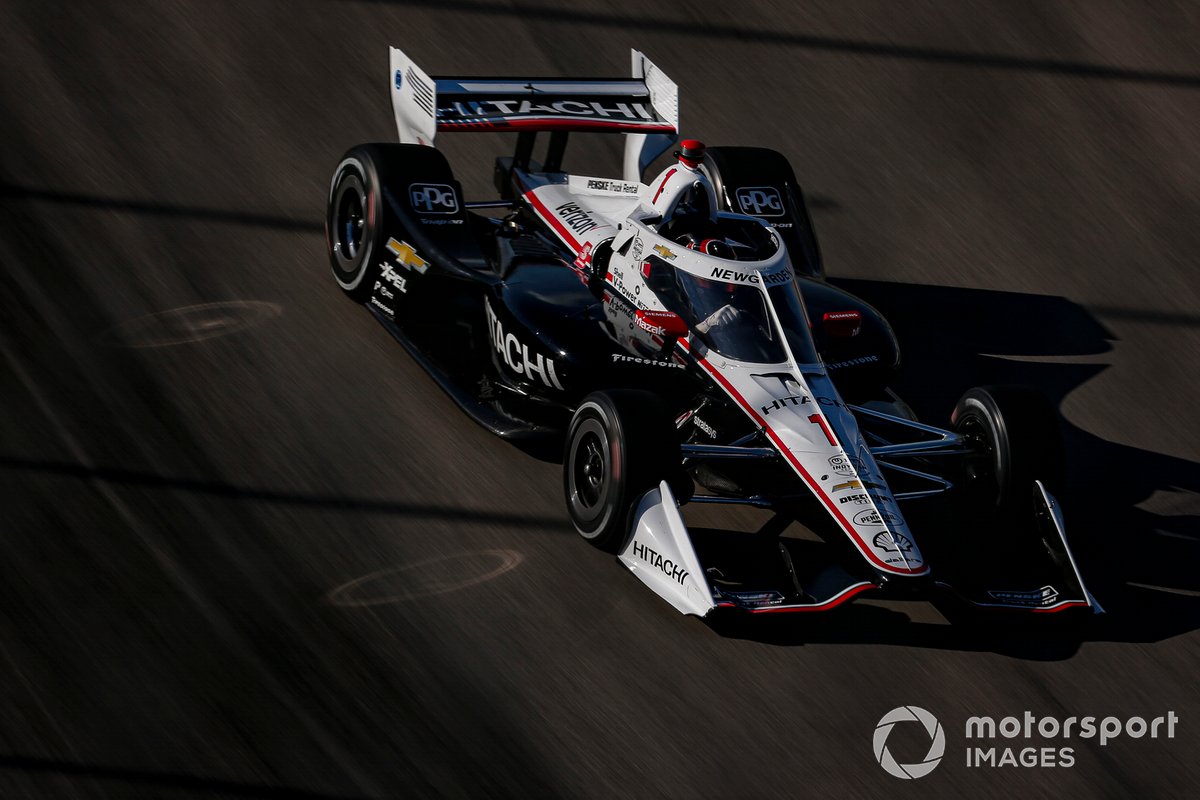 Two-time champion Josef Newgarden will be the local hero, born in Hendersonville, TN, just a half hour up the road.

Ask Cotman how fast he expects the cars to be going at Turn 1 and he says: “I’m going to wait until I do some additional simulations with multiple downforce levels, but I think that down into Turn 1, it could be high-190s to 200mph.

“Overall, with this layout I’ve tried to create a challenge for both the teams and the drivers, the big question being how much downforce you’re going to run. Do you want to trim out to be fast in the two blasts over the bridge and risk using up your tires because the car’s sliding so much in the corners? It’s interesting, especially in the first year because there’s always a huge discrepancy in philosophies from team to team and that leads to really good racing.

“Honestly, I’m not sure what the best compromise would be. The straightaways on the map look really long but they’re only a couple of hundred feet longer than at Indianapolis Motor Speedway – and that’s shorter than, say, the front straight at Road America, or the long straight in the Brazil Sambadrome [as used 2010-’13].

“And you still need enough wing to give you downforce through Turn 1. Despite how it looks on the map, the guys won’t be turning through 90 degrees because the width of the track and the ideal racing line means it will be a much shallower angle through there. Plus they need to have enough downforce to not be sliding too much through the other corners… but equally they don’t want to get mugged on the straights. So it should be interesting to see who does what.

“But as well as giving the drivers a really good challenge, the important thing is also to give the fans a really good show, wherever they’re sitting. So whether the spectators are looking at the cars from the side or from head-on, or watching them go away over the bridge or around the stadium section and overlooking the pits, there shouldn’t be a bad seat in the house.”

Work to be done 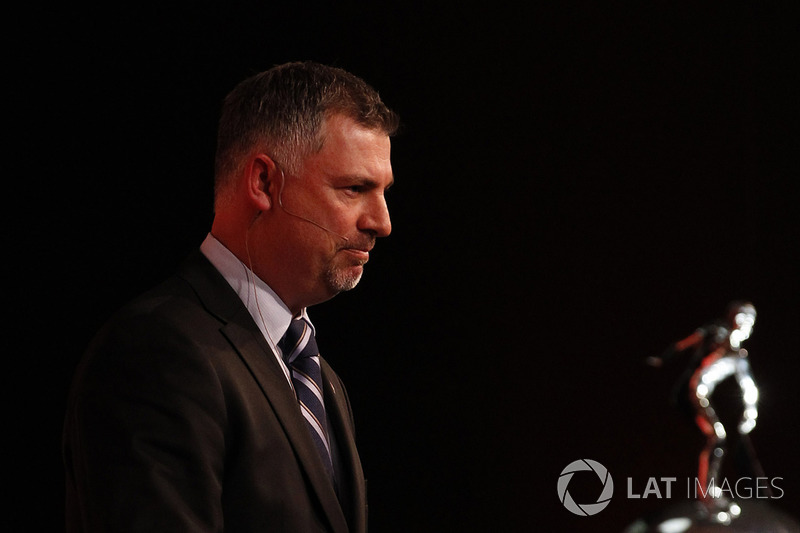 Cotman, as ever before a new facility is first used, will be hard at work between now and next August making sure everything is on point and on time.

“Yeah, there’s a fair bit to do as far as track surface is concerned,” he remarks. “Between Turns 1 and 2 right now there’s a new hotel [La Quinta] being built and so the heavy vehicles going to and from the site means the road has suffered. And there’s also some widening to do in front of the stadium between Turns 3 and 4. Then there’s some areas up around T7 through T10 that need resurfacing and additional work. We'll also do some grinding here and there.

“But you know, there are a lot bumpier surfaces that IndyCar – and before that, Champ Car – have raced on to. That said, I want the drivers and engineers and fans walking away talking about how challenging and good for racing the track is, not talking about bumps. So although we’re not going to get it rollercoaster smooth, it’s going to be good by street course standards.”

Cotman agrees it will be "quite hot" – the weather channels suggest Nashville in early August is 89-90degF on average – but he points out, “There are plenty of trees around, lots of natural ways to shelter, and the track team are working on plenty of additional cool zones for the fans.”

Unlike some temporary facilities that receive criticism for adversely affecting the business for outlets actually situated around the venue, the Music City Grand Prix will cause minimum disruption for nearby companies.

“There’s the hotels on the straight between Turns 1 and 2 – so if you pick the right room you’ll have a great view – and then there’s also an Exxon gas station, and that’s it as far as local businesses around the track. So there’s not much disruption. It also means there’s a ton of space for all the temporary facilities they’re going to bring in like food courts, music stages, fan zones and so on. It should be great.

“There’s a lot of work to get done, and the promoter has to do a lot of work, too – the improvements are on the promoter rather than the city itself. But everyone involved locally seems to be excited about a Music City Grand Prix and that’s more than half the battle, right? IndyCar wants to show what it can bring to a region in terms of business, and Nashville gets it and they know how to throw these huge events and make them work.

“This is going to be a good one and it has a future. There’s real investment and IndyCar wants to be there.”