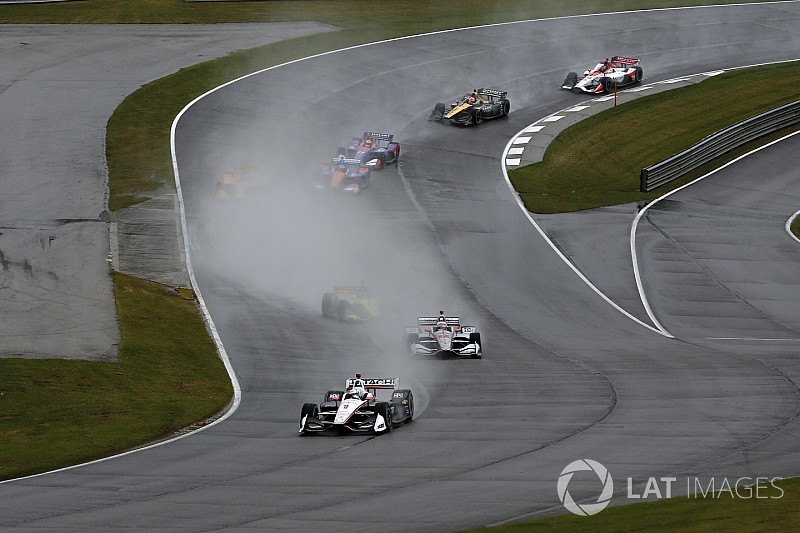 Josef Newgarden says he couldn’t believe how long his IndyCar rivals stayed out on dry tyres in the rain in a "really risky" attempt to beat him at Barber.

Newgarden had dominated the dry running at Barber, building a lead of over 25 seconds before his first of two planned stops.

Dale Coyne Racing’s Sebastien Bourdais had conserved fuel in the hopes of making a one-stop stick, with Chip Ganassi Racing’s Scott Dixon running several more laps than Bourdais in the hopes of pulling off a similar strategy. But rain in the final third threw the race on its head.

Newgarden was the first to go to wet tyres as his two rivals tried to extend their running on slick compounds, with Andretti's Ryan Hunter-Reay also trying a short-lived slick gamble.

They had to concede defeat to Newgarden as Bourdais and Dixon both slowed significantly in the wet conditions before changing to slicks late on, and the Penske driver said he was stunned by their choices.

“[That was] more eventful than I would have liked,” said Newgarden. “It seemed like smooth sailing for the most part.

“We weren’t having any yellows, we were hoping [for] no yellows today. But then that rain crept in and I couldn’t believe how long everyone stayed out.

When Newgarden was asked if he was aware of Bourdais remaining on slicks, he said: “Yeah, I knew what he was doing.

“It was the same thing with [Ryan] Hunter-Reay when he came up on me, and I asked if he was still on slick tyres.

“At that point, you could still probably manage them, but man it just kept getting worse and worse every lap; so, more and more risky.

“The problem is we put the rains on a little bit earlier to protect [the net lead] and I kind of fried the fronts because you know, these things aren’t designed to work in the dry.

“So, in the day I kind of over-cooked the front end. And then I had to deal with that when the rain actually came.

“Fortunately we had a big gap. That’s really what I think helped us win the race was just building that gap over the beginning part [of the race].”