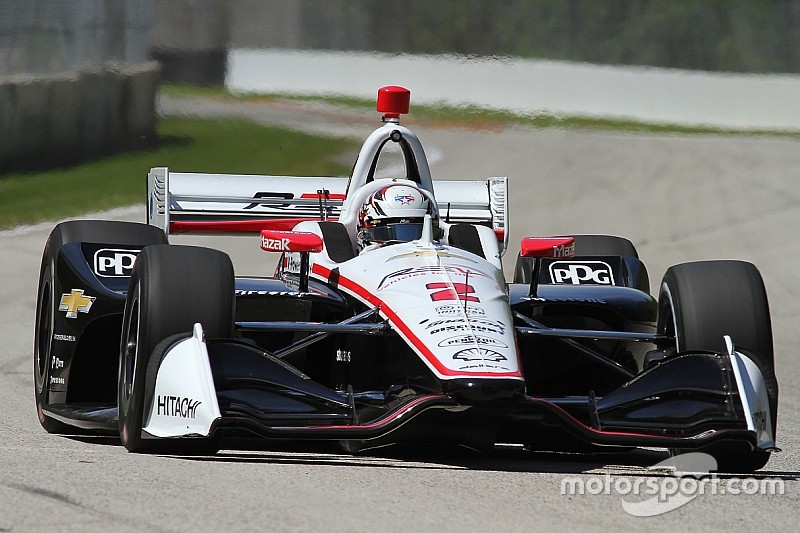 IndyCar championship leader Josef Newgarden says that Team Penske-Chevrolet made gains in the Mid-Ohio test on Tuesday as it seeks to close its deficit to Andretti Autosport-Honda on natural road courses.

Last weekend’s REV Group Grand Prix at Road America saw Andretti’s Alexander Rossi outqualify the Penskes of Will Power and Newgarden and then lead all but one lap, leaving them trailing some half-a-minute in arrears in second and third.

That result has allowed Rossi to reduce his gap to Newgarden to just seven points, and with three of the seven remaining races being held on natural road courses – including the finale at WeatherTech Raceway Laguna Seca, which is worth double points – alarm bells have rung at Team Penske and Chevrolet to up its road course game or risk missing out on the title.

With Chevrolet’s manufacturer’s test at Road America from two weeks ago being postponed due to bad weather, the Chevy teams – plus Harding Steinbrenner Racing with Colton Herta and Andretti Autosport with Indy Lights driver Ryan Norman – rearranged the test for Mid-Ohio SportsCar Course, scene of round 13 at the end of next month. And Newgarden believes he, Power and Simon Pagenaud were able to make progress in improving their roadcourse setups.

“It was a very beneficial test,” he told Motorsport.com. “It’s always good to get a peek at a racetrack where we’re going to be racing in a few weeks, but for us specifically, we worked on improving our road course cars right across the board – for Mid-Ohio, Portland and Laguna Seca.

“And yeah, I think there are some very interesting things that came out of the test, things we can utilize. It was very positive in a lot of respects.”

The urgency of the situation saw the three Penske drivers turn a total of 162 laps in the morning and 163 in the afternoon, despite Power losing track time in the afternoon due to an engine failure and missing out on a run with a fresh set of tires. Newgarden commented that the trio started off with similar setups but covered a lot of ground as the day wore on.

“We were pretty close in setup but then we did all try and get through as much of a big list as possible and divide that up between us,” said the 2017 IndyCar champion. “But at the same time, we also like to verify our read on stuff, to confirm with each other what we’ve discovered. It’s just good to get a second opinion from your teammate, because he may feel slightly different about something, might point out a circumstance where the change would or wouldn’t work – that kinda thing.

“So although we went down different avenues, we also rotated certain items or setups between us, and decided on priorities and so on. Obviously I can’t get too specific, but I think we definitely found some fine-tuning stuff that each of us individually preferred, but at the same time we found improvements that push us forward collectively.

“I tell you, we turned a lot of laps. In the afternoon, I don’t recall getting out of the car at all. Just did four hours straight, in and out of the pits.”

Asked where he thought Andretti Autosport were gaining time – transferring power to the road on the exit of corners, engine torque, suppleness over bumps, etc. – Newgarden echoed teammate Power.

“We have our theories,” he said, “but honestly, I agree with what Will said last weekend: it’s a little bit of everything. Andretti have quite a bit of strength right now, and with Alex in particular. They’re just getting it 100 percent right, and here and there we’re just a fraction off getting it right. And when you apply that to a track as long as Road America and a race with no yellow flags, that advantage tends to look huge.

“But we’re plenty capable, I have total faith in the team to flip the situation, but it is funny how this game changes so easily. Last year we struggled on street courses for the most part, and yet we worked so hard over the off-season, the guys did an amazing job and our street course car is phenomenal now.

“And it’s not like our road course car is bad: we just need a little more work on it to get us on par with our main rivals, and that work needs to come from us and from Chevrolet, working in unison. That working together is what it’s going to take.”

Asked if he was worried about his points lead reducing and there still being three road courses left on the schedule, Newgarden said: “I wouldn’t say ‘worried’ is the right word, but obviously we know he’s there, we’ve seen him coming. But I have the utmost confidence we can find a way to step up because we always do.”