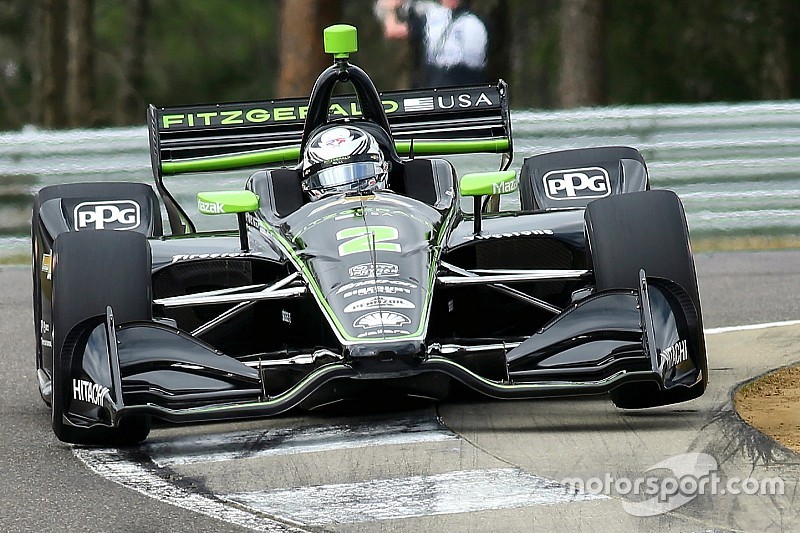 Team Penske-Chevrolet’s 2017 IndyCar champion Josef Newgarden converted 16th on the grid to fourth in Sunday’s Honda Indy Grand Prix of Alabama but says the team is still hunting for a strong road course set-up after a surprisingly poor showing at Barber.

Will Power, Simon Pagenaud and Newgarden qualified only seventh, 14th and 16th respectively at Barber Motorsports Park, a track where the team had racked up six wins in the previous nine editions of the event.

It marked the first time in five years that the legendary squad had failed to reach the Firestone Fast Six, although Power admitted that aborting a flying lap in Q2 to have a second crack at it had been the wrong policy as he had taken the edge of his Firestone alternate compound tires.

Come the race, Power, despite setting fastest lap, found his car plagued by oversteer, eventually leading to a spin and an 11th-place finish, Pagenaud rose to finish seventh, but Newgarden drove a bold, thrusting race, the team aced pitstop strategy and tire strategy, and he snatched fourth place from Alexander Rossi’s Andretti Autosport-Honda in the dying laps.

Afterward, Newgarden told Motorsport.com: “We tried something different in setup than Will and Simon. Will definitely had a hard time with something he tried – he looked very loose, I could tell he was struggling. Don’t know so much about Simon’s race.

“But we were definitely better over race distances. Our car has been tough to drive all weekend and I definitely struggled to get a lap out of it. On Friday and Saturday morning, I barely got in any laps, so it was hard to give feedback and dial in where we needed to be for qualifying, so we were a bit off.

“I think our road course setup needs work, quite honestly. Our street course car feels good, we’ve made a lot of gains, but the road course car – our team as a whole – needs to do work.

“The encouraging thing is that we’re good, we’ll figure this out, we just need a little bit more time. We need to get it right because there’s five more road courses but we will, this team is the best. There are too many good people to not make it work.”

Newgarden started on new primary tires, pitted early for a fresh set of reds, then ran used blacks before ending the race on a second set of reds – another new set, since he hadn’t advanced out of Q1 and used them in Q2.

Although several teams had struggled to make reds last, Newgarden said that he didn’t have that problem in the final stint because he was having to save fuel.

“That makes it a little easier on the tire,” he explained, “because you’re having to be so much more controlled in how you put the power down exiting corners that you save your tires. You’re being a lot smoother with the throttle.

"The lateral force you put in rolling into the corner is similar, maybe a little more, but you save so much on power down and you’re lifting and coasting into the turn, and that helps.

“But also the track was rubbered up by then, so that is also kinder to the tire.”

Newgarden apologized to Rossi for his scruffy pass at Turn 5, which pushed the Andretti Autosport driver out wide, but Newgarden said Rossi was unperturbed.

“He seemed fine with it when I spoke to him, I think because that’s how he races people! I went into the corner deep but so did he, deeper than I thought he would, so I locked up and ran out of room, so that’s how I got into him. But he made it work, he gave me room, so that’s all cool.”