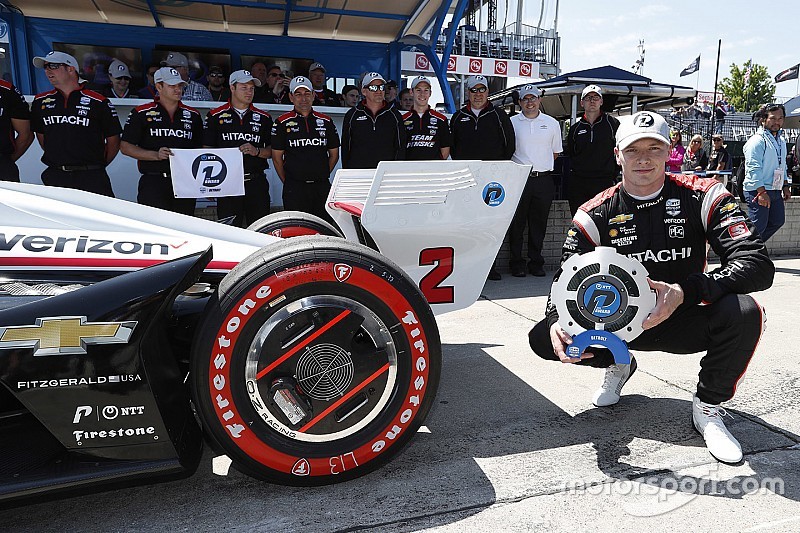 Team Penske-Chevrolet’s Josef Newgarden and Andretti Autosport-Honda’s Alexander Rossi continued their domination of IndyCar's Detroit Grand Prix, sealing the front row as they did for Race 1, but this time with Newgarden on pole.

In Group 1, (Group 2 from yesterday) Chip Ganassi Racing’s Scott Dixon and Alexander Rossi looked a cut above their rivals on the primary tires, but with heavy rain overnight, the Firestone alternate compound rubber was the way to go.

With his final flyer, Rossi got down to 1min15.1825sec, a second slower than the day before, but almost half a second quicker than Colton Herta’s Harding Steinbrenner Racing-Honda.

That margin was exaggerated by Herta making a mistake on his flyer, but his second place was saved by the fact that Dixon felt something not quite right with the steering of his car which has been repaired from his heavy tire-wall collision in yesterday’s race.

Rookie Patricio O’Ward was fourth-fastest for Carlin Racing, the fastest Chevrolet in the group, ahead of Spencer Pigot of Ed Carpenter Racing, the Arrow Schmidt Peterson Motorsports-Honda of Marcus Ericsson and Indy 500 winner Simon Pagenaud, who said he used up the rear tires too quickly to set a competitive time.

He was in better shape than Graham Rahal who will start from the back row after existing electrical issues with his gearbox hit hard just as he began his first flying lap on the alternate compound,

Group 2 qualifying was swiftly red-flagged as rain water from the tire barrier and tarpaulin at Turn 6 suddenly spilled across the track. To clear up the track and vacuum the remaining water out of the tire wall took 50 minutes.

IndyCar reset the Group 2 clock at 12mins, and while some started the session on alternates, Newgarden managed to turn a 1min16.1sec on primaries.

That was eclipsed by Sebastien Bourdais’ 1min15.7367sec on primaries and the last runners on primaries pitted for reds.

Newgarden ensured the pole-winner would come from Group 2 by lapping in 1min14.8607sec and that remained unbeatable. Power was only 0.006sec behind until he bounced off the wall at Turn 6 and lost seven tenths, leaving him sixth in the session, and starting from 11th.

Newgarden’s closest opponent – albeit 0.4sec behind – was Zach Veach in his Andretti Autosport-Honda, producing his best ever qualifying performance to seal third on the grid alongside Herta.

James Hinchcliffe was third-fastest and will start on the inside of the third row for Arrow Schmidt Peterson Motorsports, while Felix Rosenqvist was fourth-fastest, albeit frustrated to be held up for a couple of corners by Power.