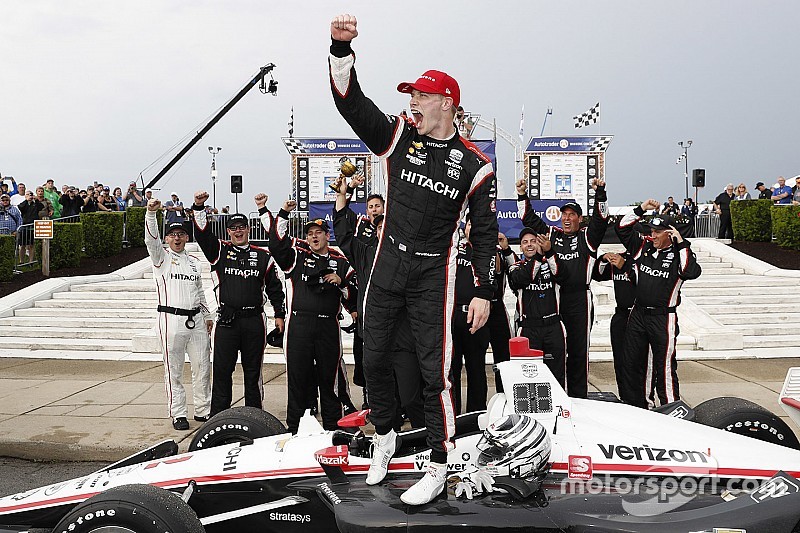 The first race in IndyCar’s double-header was declared a 75-minute timed race, which began 75 minutes late due to lightning and heavy rain over Belle Isle at the original start time.

The standing water persuaded IndyCar to start the race single-file. And with it declared a wet race, the normal rules of both slick compound Firestones needing to be used were dispensed with.

Zach Veach spun out of his eighth place on the final of three warm-up laps and managed not to hit anything but was moved to the back of the field, and so the first lap was held under caution. Marcus Ericsson reported having problems with his gearbox on that lap under yellow, but a reboot appeared to cure his problems.

Further back, Patricio O’Ward, who had started seventh, fell to 15th when Sato drifted wide and pushed the Carlin-Chevrolet into the outside wall. Then Matheus Leist spun his AJ Foyt Racing-Chevrolet, knocked its nose out of joint on the wall, and Santino Ferrucci in the Dale Coyne Racing-Honda did a fine job of not locking up his wheels and steering around the spinning car.

At Turn 3, Will Power’s Penske-Chevrolet outbraked Graham Rahal down the inside to move into ninth as the yellow waved for Leist’s incident.

Rosenqvist passed Newgarden for third, while Power went down the inside of Hinchcliffe at Turn 1 and Hunter-Reay at Turn 3 to move into seventh, and next time by he passed Herta for sixth.

Rossi’s lead over Dixon over the next three laps concertinaed in and out between 1.5sec and 0.8sec while on Lap 9 Power elbowed past Sato for fifth at Turn 7. A lap later, Hunter-Reay spun down the escape road at the same spot and fell to 15th.

At Lap 10, Rossi’s lead was out to 1.7sec, with Rosenqvist a further 2.7sec back and only 0.8sec ahead of Newgarden as Power started hunting down the pair of them. On Lap 12, Rosenqvist ran wide at Turn 7 allowing Newgarden back into third. Behind sixth-placed Sato, Indy 500 winner Pagenaud had passed Herta to grab seventh.

On Lap 12, Andretti pitted to gamble on primary slicks. It looked sketchy beyond belief, and he made several major saves, as Power moved past Rosenqvist for fourth on Lap 14.

With a dry line emerging, the drivers needed to start looking for wet spots to cool their tires on the straights, and Dixon was staying around one second behind Rossi, and 3.4sec ahead of Newgarden who was a similar distance ahead of Power.

Ferrucci, Hunter-Reay and Spencer Pigot also pitted for dry tires – Ferrucci for alternate compound slicks. Then Newgarden stopped on Lap 17, just before the caution flew for Jones who had missed his braking point and understeered into the Turn 7 tire-wall. When the pits opened, the conga line of cars who had not yet stopped filed in, leaving Newgarden at the front.

The stop was a disaster for Power, as he was dropped off his jacks and waved out with the right-front wheel not yet secure. The wheel came off, as soon as he turned right at the end of pitlane and he was forced to bump and grind his way back to pitlane on three wheels. As a precaution, the #12 crew also changed his nose.

Newgarden now led Rossi, Dixon, Rosenqvist, Hunter-Reay, Sato, Pagenaud, Hinchcliffe and Rahal, while Power was 21st. To add insult to injury, Power would be given a drive-through penalty for an unsafe release and for pit equipment outside the box.

Dixon had it even worse a lap later, when he clipped the inside wall at Turn 6, broke a toelink and understeered into the tires on corner exit. He climbed out having suffered his first finish outside the top 20 since his catastrophic shunt at Indy two years ago.

The Lap 28 restart with 22mins to go saw Newgarden pull clear of Rossi and Rosenqvist, but Sato slotted past Hunter-Reay for fourth, and a lap later deposed Rosenqvist for third.

Behind Hunter-Reay, Pagenaud outbraked Rahal for sixth, chased by Hinchcliffe, Veach and Pigot. Two laps later, out came the caution again – this time for Leist understeering into those much abused Turn 7 tires.

The next restart came at the end of Lap 33, and this time Rossi was much closer to Newgarden but the leader used his push-to-pass boost to remain clear of attack at Turn 3. Just behind, Sato took a brief look at Rossi, lost a little momentum and came under half-hearted threat from Rosenqvist, but the Swedish rookie was firmly rebuffed.

Behind this pair ran Hunter-Reay, Pagenaud and Rahal. On Lap 35, Veach moved past Hinchcliffe and into eighth – the young American’s best race since Gateway last year.

Over the final 10mins, Newgarden and Rossi pulled clear of Sato (who was still having to fight off Rosenqvist), and the lead pair traded fastest laps as their strategists Tim Cindric and Rob Edwards respectively relayed to their drivers when and where they were on the push-to-pass boost.

Newgarden crossed the line 0.8237sec clear of Rossi who was out of boost, with Sato third ahead of Rosenqvist, Hunter-Reay, Pagenaud, Rahal, Veach, Hinchcliffe and Pigot.

In the championship, Newgarden now has a 25-point advantage over his Indy 500-winning Penske teammate Pagenaud, with Rossi a further eight points back in third.

Dixon: We’ve got nothing to lose now, we’ll just go for wins