© 2021 Motorsport Network. All rights reserved.
TV Tickets Fashion Giorgio Piola Jobs
Previous / The Time Trials at the Indianapolis 500 Next / A Week at the Indy 500 Lasts a Lifetime
IndyCar Qualifying report

No bumps on Bump Day but plenty of drama

The 97th Indianapolis 500 Mile Race lineup is completed: Bring it on!

Bump Day at the Indianapolis Motor Speedway, well, wasn’t. There wasn’t any bumping and the big drama that occurred as qualifying ended for the 97th Indianapolis 500 Mile Race centered around the possibility of a bump.

This was a beautifully sunny, hot and humid day in Indy, one in which 34 car/driver combos practiced throughout the afternoon. There was an hour-long practice between 9 and 10 this morning, but only 11 drivers took part, putting together only 231 laps. Graham Rahal, who was bumped out of Saturday’s Pole Day extravaganza, was quickest of that bunch at 226.564; Charlie Kimball took his T car out for a single lap and was, quite obviously slowest. Rahal was also quickest in the long afternoon of practice.

Qualifying began at 12:15 and ended about 45 minutes later, with the final nine spots readily filled. Josef Newgarden became the fastest second day qualifier at 225.731 mph – he was the eighth driver on the track, followed by Graham Rahal’s four-lap average of 225.007 as the fifth in the qualifying line. Sebastian Saavedra completes the ninth row at 224.929. 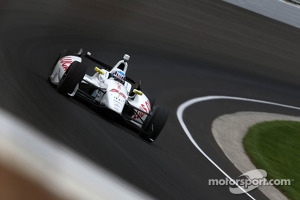 Rookie Tristan Vautier had a much better time of it on Sunday, turning 224.873 mph to head the tenth row; he looked like he’d be able to vault to the ninth row but had a severe fall-off on his fourth and final lap. Ana Beatriz’s 224.184 put her in the middle of Row 10 alongside a relieved Pippa Mann, who clocked 224.005.

Recovering from his wall smack and a broken exhaust header in Saturday qualifying, rookie Conor Daly holds the inside spot on the final row at 223.582, but it’s the final two qualifiers that were the talk of the town. Buddy Lazier was first in the qualifying line and he hit 223.442. The Lazier car used to be a Lotus and the crew, many former Hemelgarn Racing folks, worked to convert the car to Chevrolet power throughout the week and gave the 1996 Indy 500 winner a solid car to drive.

Katherine Legge, the final car to take four timed laps, had less than 20 laps in her No. 81 Schmidt Peterson Pelfrey Honda racer before qualifying this afternoon at 12:53; she logged 223.222 and nabbed the final spot.

Left on the outside was Michel Jourdain Jr., attempting his second straight Indy 500 with Rahal Letterman Lanigan Racing. The team tried everything they could to get some speed out of the car but it just wasn’t meant to be. They even put Graham Rahal in for some exploratory laps, but even he couldn’t get the thing over 202.260! The best Jourdain could do in practice this afternoon was 219.843, so they just didn’t think it was smart to trim it out and make a futile attempt to qualify.

“All week we struggled,” Jourdain said. “I didn’t feel the car very well… when you’re only driving once a year, it’s just so hard to know.” The team changed the undertray, springs, dampers, tried Rahal’s setup, teammate James Jakes’ setup, but nothing worked. “I couldn’t go flat out” and he felt if they did “something stupid and put the car in the wall, there’s no point in that.” 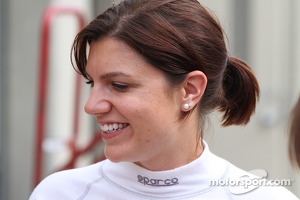 Relief was what Legge felt after her 50-lap day at Indianapolis. “I had to get after it and we have done a bit today. Our race car is really nice; I feel really comfortable, ran in traffic a bit. We didn’t have to trim out, so I have no idea what the car is like trimmed out.” While she was hoping Jourdain could find the speed to qualify and they could have a “fair fight” it wasn’t meant to be.

So now the field is set for the 97th Indianapolis 500 and it looks like the weekend should have clear weather for racing (but who knows?). The drivers will set out on a cross-country tour to promote the race on Monday, the rookies are feted on Tuesday, team owner Sam Schmidt’s Gala to cure paralysis comes Wednesday, along with Community Day at the track, the Firestone Indy Lights take over on Thursday with their race following Carb Day activities on Friday, the parade is Saturday and then there’s 200 laps of racing to contend with on Sunday.

It should be a good one, with the memory of last year’s monumentally fun race in everyone’s minds. And the field is split by only five miles per hour, making it one of the more competitive in history.

A Week at the Indy 500 Lasts a Lifetime