Notes and quotes from the IndyCar race at Texas

Ed Carpenter was victorious in the Saturday night showdown at Texas Motor Speedway.

He started fifth, took advantage of a late race restart opportunity and shook off bad luck from Indianapolis to score his third win in Verizon IndyCar Series competition.

Ed Carpenter had the right amount of laps left after a late-race caution for Takuma Sato’s blown engine to hold off Will Power. Carpenter won after Power pitted during the caution for fresh rubber. 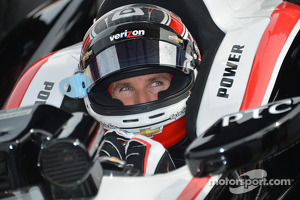 Power went from sixth to second but ran out of laps at the end of the race. Power, who had led over 100 laps, was handed a pit-lane speeding penalty.

“Another drive-thru, that’s four drive-thrus in five races. That’s not good enough. Anyone who says I don’t get drive-thrus or penalties are crazy, man,” Power said.

Carpenter slowed down quite a bit on the last restart, but claimed Montoya was laying back.

“I’m the leader of the race, you’re not supposed to lag back, we talked about that in the driver’s meeting.” Carpenter said.

Carpenter had the last laugh.

Outside front row starter Josef Newgarden finished 11th after struggling with the setup.

“It’s a good day just cause we can drive it on the trailer I guess that’s a good way to put it. We just had a lot of rear issues, we were struggling with a loose car tonight,” Newgarden said. 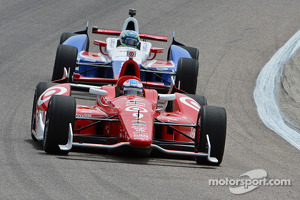 “I’m just actually glad I got to the end. The car was so loose the whole race I hardly had to turn left,” Dixon said.

Top rookie Mikhail Aleshin was 7th on the last restart, but alleged that Kimball and Briscoe incurred rules violations, which Indycar agrees with.

"Following the conclusion of the race, VICS officials reviewed the results and penalized Ryan Briscoe, Sebastian Saavedra, Josef Newgarden and Charlie Kimball 30 seconds for failing to follow the direction of race control."

“For sure it’s a good result, we just need to find out if we can get our 7th place back. If we can, it will be awesome, but anyway the car was good,” Aleshin said.

The race started off with Marco Andretti gaining over a half dozen positions in the first lap, before his engine failed on the third lap of the race.

Andretti Autosport’s night went from bad to worse, as Carlos Munoz spun on pit road under caution and Ryan Hunter-Reay’s engine failed at lap 135 of 248. Munoz ended up finishing highest of the AA drivers with a 13th place finish.

The night’s only accident took place in turns 3 and 4 with Sebastien Bourdais and Justin Wilson getting into each other. Neither driver was seriously injured.

Carpenter’s next race will be in Iowa after Mike Conway takes the Fuzzy’s Vodka car over for the Houston double-header.