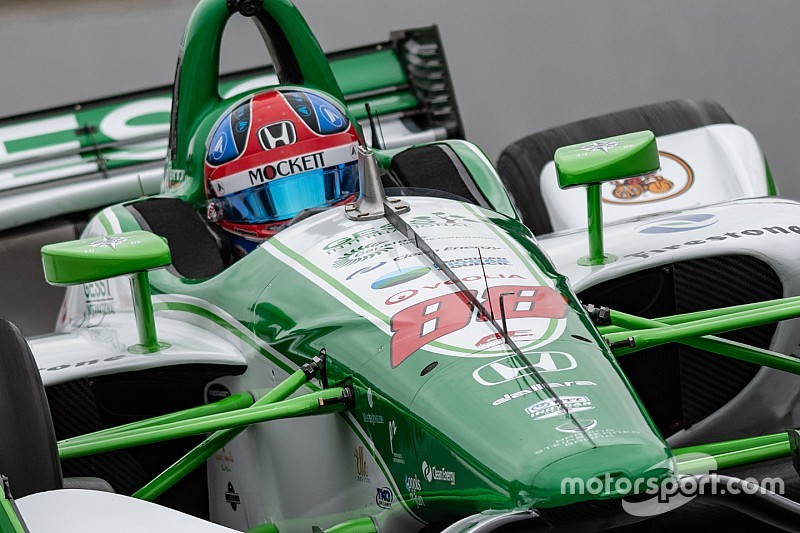 Colton Herta put the Harding Steinbrenner Racing-Honda at the top of the times in second IndyCar practice at Mid-Ohio, while Josef Newgarden shunted as he was about to start his first flying lap on Firestone’s alternate tires.

The #2 Team Penske-Chevrolet was lying 11th fastest when Newgarden headed out on Firestone ‘reds’, but when the championship leader dropped a wheel off the curb exiting Turn 9, the car spun through 180 degrees and backed hard into the tire wall on corner exit.

For causing a red flag, Newgarden was given a five-minute penalty, ending a session which restarted with less than two minutes to go, allowing drivers just one final crack at a representative time. However, most cars were tripping over each other, and there were no improvements.

Thus Herta’s 65.7292sec lap of the 2.258-mile road course – a 123.671mph lap – held firm, over two-tenths ahead of his nearest rivals and almost three-tenths clear of the fastest of his Andretti Autosport semi-teammates, Ryan Hunter-Reay in fifth.

Simon Pagenaud was second-fastest in the Team Penske-Chevrolet, pipping team Will Power who set his fastest time on Firestone primaries and was fastest on that harder compound.

Felix Rosenqvist was the top Chip Ganassi Racing-Honda driver in fourth, ahead of Hunter-Reay, while James Hinchcliffe was again fast in the Arrow Schmidt Peterson Motorsports-Honda in sixth.

Matheus Leist’s arrival in seventh for AJ Foyt Racing-Chevrolet was a surprise upturn in fortunes for the beleaguered team, ahead of Jack Harvey in the Meyer Shank Racing with Arrow SPM-Honda.

Surprisingly for the second straight session, Alexander Rossi appeared to be struggling with the handling of his Andretti-Honda and languished in 13th, just ahead of teammate Zach Veach.

Rossi, who wasn't able to squeeze in a fast lap on the reds, said: "“Obviously, we’re not where we’d like to be at the end of the day. We tried a few different things, so we know what doesn’t work, but we need to find what does.

"We were hoping to get a good run in just before the red flag came out, so we can’t really gauge how we ended, we just know we need to work overnight to figure out what it is we’re missing. Luckily Ryan [Hunter-Reay] found something that was a little beneficial so hopefully we can take that and build off of it.”

RC Enerson was another impressive rookie, finishing the session 15th for Carlin-Chevrolet, ahead of teammate Max Chilton. Enerson, returning to the series for the first time in three years, caused a minor fracas at the end of the session, barging his way ahead of drivers who were trying to make a gap to try for one last flyer.

However, this was put down to simply not knowing the rule that following a late red flag in practice, so long as a car emerges from pitlane within 40sec of the following green, he is guaranteed an out-lap and a flyer.