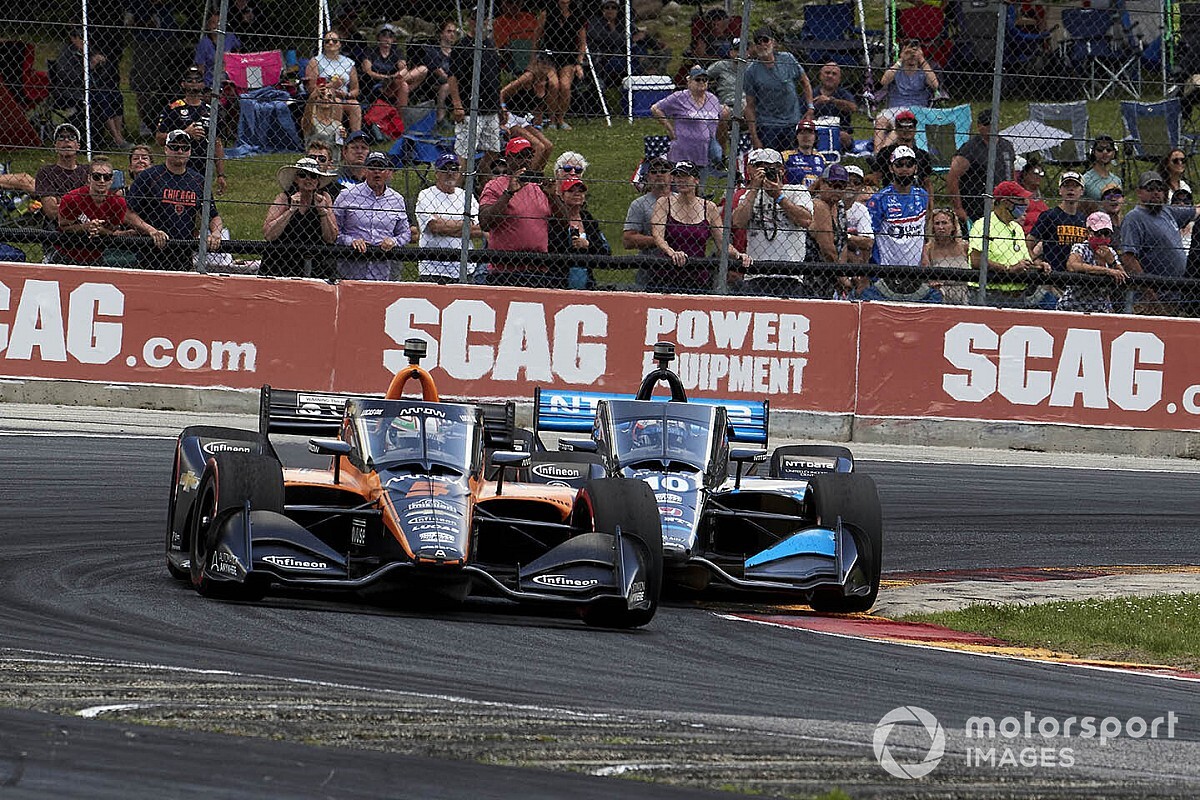 Arrow McLaren SP-Chevrolet driver Patricio O’Ward says he’s been left with mixed emotions after dominating the second round of IndyCar’s REV Group GP at Road America but ultimately losing out to Felix Rosenqvist.

The 21-year-old Mexican edged Colton Herta for pole position in the morning session, and went on to lead 43 of the race’s 55 laps, only relinquishing P1 during pit stops.

However, in the final third of the race, Chip Ganassi Racing-Honda driver Rosenqvist hunted him down and on the penultimate lap, wrested the lead away at Turn 5. O’Ward admitted that he was delighted with his first podium finish, but also frustrated that he came so tantalizingly close to victory in only his 12th NTT IndyCar Series start.

“I think on one side I'm ecstatic because it's my first IndyCar podium, second place and I led almost whole thing. We were a few laps short of winning the race. We were just unlucky in the end. We couldn't make it happen.

“But I'm proud of myself because I gave it absolutely everything I had. I made no mistakes. I think we executed well. We didn't have the pace that Felix had on the long tire stints. We need to work on it.

“It's a mix of emotions. I'm a little disappointed because I started on pole. After leading everything, you want to win, man! I mean, you want to execute from where you started because we led the whole thing, we didn't make any mistakes in the pit stop, we didn't lose any positions, every restart was perfect.

“It is what it is. I think we should be very proud of ourselves and what our group did today.”

Unlike Rosenqvist who took Firestone’s black primary tire for the final stint, O’Ward used scrubbed-in alternate compound rubber and made his last stop one lap earlier than his rival. Those two factors combined to leave him vulnerable to the Ganassi car, but believes those measures had been necessary.

“I think ultimately we can look back now and say we could have done maybe this a little better, this a little better,” he said. “We were trying to maintain up front and I was really struggling on blacks [primaries]. The quicker we got off of those, the better we were going to be. As soon as I got on reds, I started taking care of them.

“Honestly, that didn't really seem to help, at least whenever the stint was ending. It didn't really become much of a problem until, like, five laps to go where I was all over the place.

“I saw Felix was closing in like eight-tenths a lap. I knew his long stint pace was so strong, not just on the last stint but midway through the race whenever he got by [third-placed starter Alex] Palou. He was the one behind me, I was getting told he was slowly closing, closing, closing. I was trying to manage my tires as well as not losing too much time.

“I think we did a great job on the pit stop sequences. Felix had more pace in the end. I think we just need to work on trying to find that little extra life that we need to extract everything out of every stint.”

He later added: “Those Ganassi cars were so fast over the course of the stint, especially the last five laps. That's where we lost it. That is where we lost the race… As everybody saw, he passed me and left me. It wasn't like I could keep up. I think on one-lap shots we were the fastest car today, but I think we missed on just being able to extend the life of the rear tires a little bit more.”

The situation was somewhat confused in the closing laps by Conor Daly – coincidentally, the driver with whom O’Ward collided in Saturday’s race – who emerged from the pits just behind the Arrow McLaren SP car but with a light fuel load and fresh tires. Daly was eager to unlap himself, but O’Ward was equally eager to keep him behind as a buffer to Rosenqvist. However, needing to nurse his tires and sticking to a strict fuel number meant O’Ward had to let the Ed Carpenter Racing driver through.

That in turn caused a new problem, the turbulent air from Daly’s car causing O’Ward’s car to move about and wear its tires still quicker.

He explained: “Being behind lapped traffic is what hurt my tires. At least it hurt them to get to that tipping point probably a couple laps earlier than what they should have. That's probably why Felix really got me in the end… I tried to conserve on the whole stint, but the dirty air really, really made us just scrub a lot of speed.”

O’Ward said he remains positive about the future, and believes the team will become a race-winning force.

“I think today I learned that the further you qualify up front, the easier you make your life,” he commented. “It made a huge difference.

“That should be the goal every single weekend. Then we will be challengers for wins and podiums. That's what we're here to do.

“I'm really proud of what the team and I achieved today… We have things to look forward to and to work on. I know we're going to execute and get those wins very soon.”