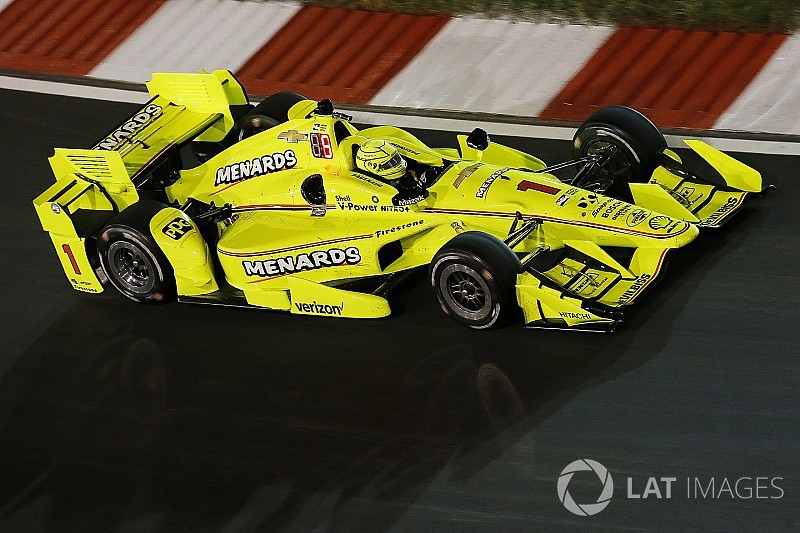 Simon Pagenaud was left fuming at his victorious Team Penske-Chevrolet teammate Josef Newgarden after being elbowed aside for the lead into Turn 1 in the final stint of tonight's IndyCar race at Gateway Motorsports Park.

Pagenaud had taken the lead of the Bommarito Automotive Group 500 by just nosing out of the pitlane ahead of Newgarden by a minimal margin under yellow.

However, despite retaining the lead following a restart, Pagenaud was still having to defend from his teammate down the front straight by pulling off the traditional racing line and hugging the pitwall. It was a move that had been seen all night from every defensive driver trying to force his opponent to take the high line into Turn 1.

However, rather than try to make an outside pass, Newgarden stayed in Pagenaud’s tow starting Lap 218, and when the 2016 champion moved slightly right to take a less compromised line into Turn 1, Newgarden slotted into the gap left on the inside, even banging rear wheels with his teammate as he ran over the white line and curbing on the inside.

That sent Pagenaud out so wide that he had to concede second place to Chip Ganassi Racing-Honda driver Scott Dixon, and it earned Newgarden his fourth win of the season, meaning all four Team Penske drivers have won on ovals this season.

A grim-faced Pagenaud, who finished third, said to NBCSN afterward: “It was a fantastic race for Team Penske with fantastic cars.

“It’s a real shame. The move? I don’t know what to say. I don’t have anything nice to say, so I’m not going to say it. But fantastic job for the #1 team, Menard’s and Chevy, for such a dominant performance.

When told that Newgarden had said that there was racing room down the inside during the pass, Pagenaud retorted: “There was room from me. Anyone else and he would have been in the fence right now.”

Later, Pagenaud expanded : “You saw what happened. I don’t have anything else to say. It was a great show for the fans, I’m very happy for Team Penske. It was a dominant performance today.

“It’s a shame we let the #9 car [Dixon] get some points on us but it was a dominant performance. Unfortunate you have to get on like that with your teammate at the end. It was way too close to be quoted a fair pass.

Asked if he would speak to Newgarden about it, Pagenaud said: “I have nothing nice to say. It was more of a NASCAR move.”

On the subject of whether he’d been surprised that a teammate would make that kind of pass, Pagenaud replied: “Absolutely, yes, especially with the #9 behind — which he is fighting for the championship.

“Quite disappointed, yes, actually, especially when we know what we have to do as a team working all together. I would not have put a pass on a teammate like that, for sure.”

Newgarden not apologetic for pass on Pagenaud