Simon Pagenaud (in photo) was the quickest in Friday practice for the weekend IndyCar double-header on the Belle Isle street course in Detroit, driving the Schmidt Hamilton Motorsports Honda to a lap of 1 minute, 17.6502 seconds on the 2.36-mile, 13-turn temporary street circuit. Mike Conway was .0647 of a second back in the Ed Carpenter Racing Chevrolet, and both were within three-tenths of a second of Conway's track record (1:17.4371) set in Race 2 last June. Pagenaud and Conway won the two races here last year.

Helio Castroneves, in the Team Penske Chevrolet, posted the third fastest in today’s combined practice session. He was followed closely by his Team Penske teammate, Will Power.

Pagenaud said it wasn't as easy as it might sound. 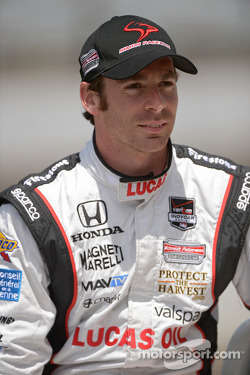 "You might think that since our team won here last year we could show up with the exact same car setup and be competitive again. However, with the winter weather here in Detroit, new bumps appear on the track surface, and we have to adjust the car for those. We had some aero issues at the beginning of the day, so we adjusted those during the first practice session. With those changes to the aero balance, the car became much easier to drive. After the second practice session, I feel confident, but there is room for improvement. I had a great flying lap, but to be at the top for qualifying we’re going to need a little bit more. We’re loving the new, bright orange Oculus Transport livery on the No. 77 car. It’s very cool to see on track, and you can absolutely see us coming.

“Something I really enjoy here in Detroit is dancing with the car from bump to bump and corner to corner," Pagenaud said. "It’s really fast. You have to accept that the car is going to slide on the entry to the corner, grip up in the middle and slide on the exit. Turn 2 here is a little bit of a jump for us in the Indy car. You’re fully loaded in fifth gear, and the car takes off and slides up into the air on the exit. I had a few airborne moments today, and I’m sure there will be many more throughout the weekend.”

Qualifying for Race 1 is Saturday morning.

The real 'Yellow Party' at Indianapolis