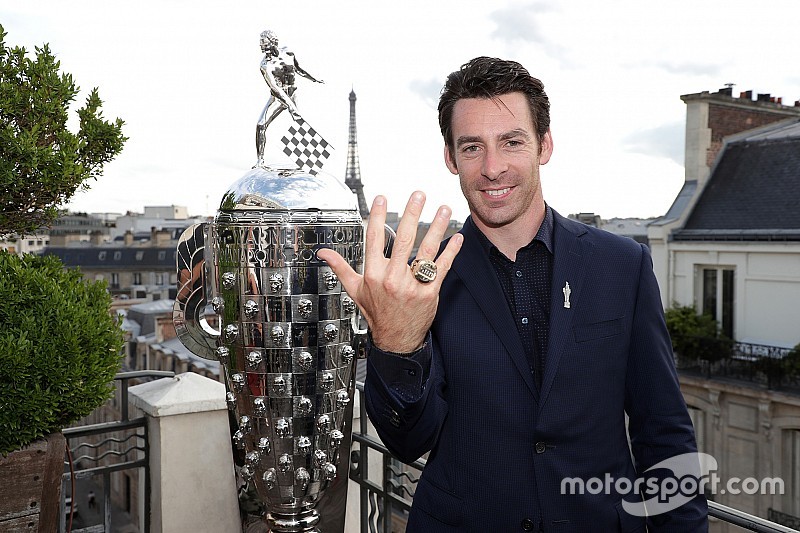 Barely nine weeks after winning the 103rd running of the Indianapolis 500, Team Penske-Chevrolet’s Simon Pagenaud admits that it has lifted a burden from his mind and he can now focus on self-improvement rather than points.

Pagenaud, who had just turned 35 a week before scoring his 14thand greatest win in the NTT IndyCar Series, yesterday became the first Indy 500 winner in history to reveal his likeness on the iconic Borg-Warner Trophy outside of the USA.

BorgWarner and IndyCar arranged for the Frenchman to perform the unveiling in Paris, the day after he attended the Hungarian Formula 1 Grand Prix and waved the checkered flag for Lewis Hamilton, Max Verstappen and the rest.

Following the immediate post-Indy headrush of interviews and photoshoots and sponsor commitments, Pagenaud has now had a chance to absorb the immensity of his achievement. He told Motorsport.com that visiting France with the Borg-Warner Trophy had allowed him to express his emotions better in his native language, and that the victory itself had alleviated his self-imposed pressure.

“It’s definitely sinking in now a little bit more,” he mused, “and being here in France is quite special. French being my native language, my emotions come out a little more in front of your really, really close friends and family.

“It’s also a sweet time at the race circuits. It’s giving me a ton of confidence going forwards, and positive energy, knowing I can fly free now. I’ve done what I wanted to do, and now I can focus only on myself and not the results. That’s really, really nice.”

Pagenaud, who has appeared to have the fastest of the Penske-Chevys on Indy 500 raceday for three of the five years he has competed for Roger Penske’s squad, said the pressure to seize the moment on this occasion had also been accompanied by a sense of confidence from the start of practice.

“Yeah, I’d been feeling like that the whole month,” said the 2016 IndyCar Series champion. “I felt like I had the car, and this was my chance because it was the most prepared I’d ever felt. It seemed like everything was falling my way the whole time.

“In the race, when I needed to save fuel, I kept behind [Josef] Newgarden and then when the yellow came out and the fuel worry was gone, I was able to relax and focus on what was going to be my plan of attack. I never had a doubt. It was the most extreme concentration I’ve ever felt,  and the most I was able to withstand.

“So for me it was a very special day in my career for many reasons, mostly for personal performance. The result obviously adds to all that, but certainly the personal performance was at the sort of level that I expect myself to operate at. As a racecar driver you have got to be your own critic and it’s rare to be fully happy with a performance, but after the 500 I honestly felt like I did everything I had to do to get it done, and I had everything fall in line.

“It would have been quite crushing if I had done everything right – and I did definitely feel this was my best race – but for it to come up a little short for another reason.”

Pagenaud, who these days lives near Team Penske’s Mooresville, NC., raceshop, said he had been a little taken aback by the degree of praise and recognition he had received during this European visit.

He said of his trip to the Hungarian Grand Prix paddock, “They treated me like a king! I walked in to say ‘Hi’ to a friend of mine and all of a sudden I got swamped. That was quite special.”

As for the reaction in his original homeland, he commented: “I’m definitely impressed with the impact over here. I expected it to be big but I didn’t expect it to be this big. It’s the pride of people when I see them come and congratulate me. Very fulfilling.

“Big big thanks to BorgWarner for letting the trophy out of the country for this unveiling – they and IndyCar made it possible, and I’m not just saying thanks. I mean it from the bottom of my heart.

“In a way it’s really great for me to bring awareness to IndyCar and the Indy 500, the greatest race in the world. I’m not taking anything away from the US – I’m so glad I live there, so glad I race there. It’s like home for me now. But I think for any human being, recognition is what we want at some point, and so coming back to my home country and getting that recognition is so special.”

Pagenaud believes the attention started with his 2016 championship triumph –  “That was a big wake-up call, for sure. It proved that we could get it done” – and says in France there is now a greater appreciation for oval racing.

“Improving my abilities throughout the years to become a better oval driver was significant,” he observed. “Certainly this year and last year, I started to pick up the intricacies, the details of racing on ovals. For a European to go to the U.S. and hope to win Indianapolis is a very far-fetched dream, because you’re going out there to try and beat the specialists, the Americans, who are the best at this. Your chances of success are very slim and so when this happens it’s a huge achievement.”

French IndyCar race would be “a dream”

Pagenaud stated that for the NTT IndyCar Series to compete at a French venue would mean a lot to him. The last time Indy cars raced in Europe was when the Champ Car World Series visited Assen in the Netherlands and Zolder in Belgium back in 2007, when Pagenaud was a rookie. There have never been any Indy car races in France, however, and European races have rarely come up for serious discussion in recent years.

“That’s a very political discussion for Mark Miles [CEO of Hulman & Company, IndyCar’s owner] and the team owners to have together,” he said. “It would be a dream to bring IndyCar to France, to have the chance to show what is for me the best racing in the world. I know the French people would enjoy it, the type of racing where you can start last and still win the race, the no giving-up attitude.

“I would love to see that happen, but that’s a driver’s dream and I don’t know the logistics around it. But certainly if we could make that happen I’d be the first one to jump on the opportunity.”

Regarding venue, Pagenaud remarked: “My home track Circuit du Val de Vienne I think would be perfect – the layout is great, it’s fun, there’s a lot of passing opportunities, the safety’s great, and it’s close to my home town. There are plenty of racetracks in France that would be suitable – Magny-Cours for example. There is also Le Castellet but I don’t know if it suits our roots, what we’re all about. I think maybe the escape roads are too much.