Panther Racing and J.R. Hildebrand have announced the termination of contracts effective immediately, only days before the doubleheader in Detroit this weekend.

The decision was mutual, according to a Panther Racing press release.

Panther Racing got its start in Indy Car in 1997, and has fielded cars for drivers Scott Sharp, Buddy Rice, Dan Wheldon, Vitor Meira and Kosuke Matsuura among others. 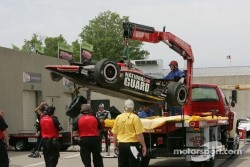 The team’s relationship with Hildebrand, the 2009 Indy Lights Champion began in 2011, after he subbed for an injured Mike Conway at Dreyer and Reinbold Racing. Hildebrand ran a total of 37 races for the team, and has a career best finish in the 2011 Indianapolis 500.

Hildebrand has had a best finish this season of 5th at Long Beach, but has had two DNFs including crashing out of the Indianapolis 500 last weekend on the second lap.

“I want to thank Panther Racing for the opportunity to drive the No. 4 National Guard Chevrolet,” Hildebrand said. “It was a privilege to represent our men and women in uniform, along with the National Guard Youth Challenge and the team's veteran employment initiatives. I'm very much looking forward to the next chapter in my IndyCar career, and wish all my friends at Panther the absolute best."

Shortly after announcing the split, Panther Racing released word that they signed Ryan Briscoe, who finished 12th in last weekend's Indianapolis 500 driving for Chip Ganassi, for the double header in Detroit. 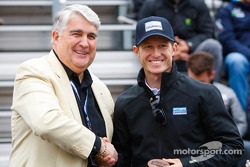 Ryan Briscoe at the drivers meeting

“I’m unbelievably excited to be back in the IndyCar Series with Panther Racing and to have the opportunity to drive the National Guard Chevrolet this weekend,” Briscoe said. “I’ve competed against this team for a long time and it will be great to have the opportunity to work with John Barnes and the Panther guys. I’m confident we’ll all work well together and be able to hit the ground running this weekend in Detroit.”

Panther Racing’s John Barnes said he is happy to have Briscoe in the car for this weekend’s race.

“We couldn’t be happier to have Ryan Briscoe join Panther Racing this weekend,” Panther Managing Partner John Barnes said. “He’s a championship-caliber driver who’s proven he can win races on any type of track in the IndyCar Series. We have no doubt he can jump right into our program and put the No. 4 National Guard Chevy at the front of the field. In his career he’s gone toe-to-toe with the best drivers in this series and won a lot of races. We’re all very excited that he’s going to become part of our family here at Panther and look forward to getting him on the track this weekend in Detroit.”

In his two previous starts at the Belle Isle temporary circuit in Detoit, Briscoe has managed a best finish of 9th in 2008 driving for Roger Penske.