With Paul Page slated to be back in the announcers stand at the Indy 500, we look back on his top five moments in the booth.

By:
Christopher DeHarde
Listen to this article

Following Sid Collins’s passing on May 2, 1977, the chief announcer position for the Indianapolis Motor Speedway Radio Network was suddenly vacant. Paul Page, a pit reporter for the network, suddenly became chief announcer, a position he held for 11 runnings of the 500 mile race. Let’s take a look back at five of the best Indy 500s during his first tenure as the Voice of the 500.

Off track happenings make this Indianapolis 500 number five on this list. This was the year that, as Donald Davidson said on a future Indy 500 radio broadcast, that “everything went wrong.” The timing and scoring system went down early in the race, so John DeCamp wasn’t able to give proper 10 lap standings throughout the race except at rare intervals, and when proper information was relayed it had to be done on foot after Davidson would relay messages from Ray Paschke. This 500 put the booth under considerable pressure since at times they wouldn’t know the full running order, but they got through it and called Rick Mears home.

You never forget your first time, and Paul Page sure wouldn’t. Having to take over from Sid Collins would not be an easy task for any announcer, but Page worked through the historic race. Janet Guthrie became the first woman to compete in the 500, Tony Hulman had to change the famous command to start engines, and most important of all, AJ Foyt’s 4th win happened on this day. 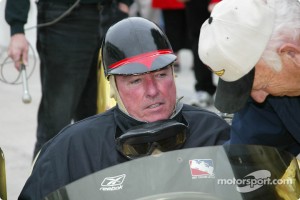 The famous Belond Special was driven to a first place finish in the 1957 500 by Sam Hanks; Johnny Rutherford drove the car for this legends of the Indy 500 event

There were a lot of storylines that played out in May of 1983. There was a rookie polesitter and the man starting next to him wasn’t even in the 1982 field. Johnny Rutherford wasn’t in the race and neither was Gary Bettenhausen, and this year saw the first father and son combination in the race. However, the big story came with a late race restart, as Al Unser Jr. attempted to help his father win. However, Sneva got around the younger Unser and on the same lap, around the elder Unser. Page called the dramatic finish knowing how badly Al Jr. wanted his father to win, but in the end it wasn’t meant to be.

Page’s final 500 in his first tenure as the Voice of the 500 ended with the greatest upset in Indy 500 history and maybe one of the greatest in sports history. Al Unser Sr. was unemployed at the start of practice, got Danny Ongais’s ride after Ongais was not cleared to race, and ended up winning the race as Mario Andretti faltered after leading 170 of the first 177 laps. Roberto Guerrero struck a wheel that came off of Tony Bettenhausen’s car and the wheel went over the grandstands, but not before unfortunately striking a spectator in the top row. Bob Jenkins reported what happened from turn 4, but could not confirm at the time whether a spectator was struck. After the incident, no further mention of the incident was made during the event. 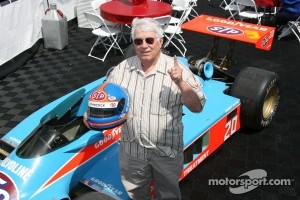 From start to finish, nothing else ranks close to beating 1982. Page had called that the start was waved off, and eventually saw that Kevin Cogan and Mario Andretti wrecked thanks to Rodger Ward pointing it out to him. Page filled up the delay with the IMS Radio Network pit reporters interviewing several drivers that were either involved in the wreck or drove through it. Page’s wife interviewed several celebrities during the delay including a couple of stars from the new hit series Hill Street Blues. The broadcast went on without incident, and the network called what is perhaps one of the best instances of broadcasting teamwork when Rick Mears was catching Gordon Johncock in the last stint of the race and nearly beat him, but came up short in the end.

Truth in advertising: how to market IndyCar

Nashville winner Dixon feared his race was ruined by shunt

Scott Dixon was convinced that car damage had ended his hopes of victory, before working his way to the front and clinging on for his 53rd win.

Josef Newgarden said “Welcome to IndyCar” in response to his clash with Romain Grosjean, while teammate Will Power felt lucky to finish the race after his gearbox was damaged in a clash.

Palou sure he has fair title shot, despite Ganassi conflict

Defending IndyCar champion Alex Palou is sure he will have a chance to retain his crown, despite being only third highest Ganassi driver and on the brink of an acrimonious departure.

Dixon elated to win with wounded car on old tires

Scott Dixon said his 53rd IndyCar victory was a credit to his team, after repairing damage in the early stages of the race.