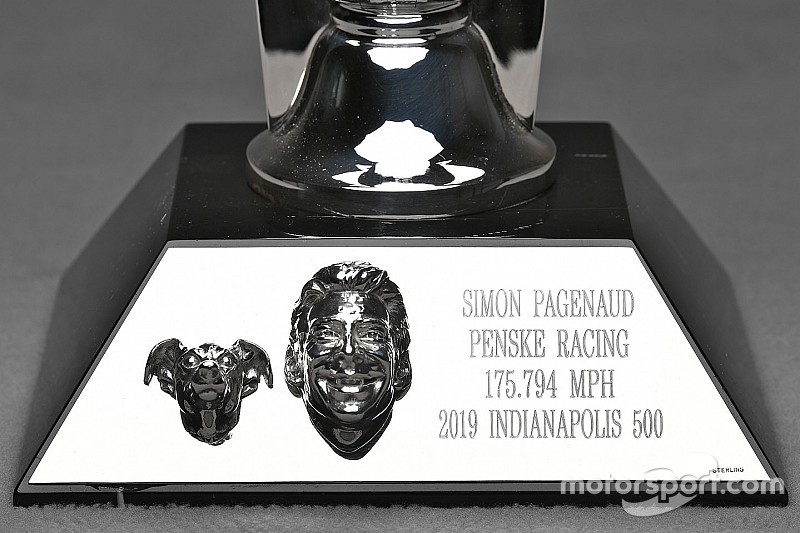 Polesitter Pagenaud fought a hard duel with 2016 Indy winner Alexander Rossi of Andretti Autosport over the final quarter of the 103rd running of the Memorial Day Weekend classic, the Team Penske-Chevrolet driver eventually prevailing by 0.2086sec, with another former winner Takuma Sato (Rahal Letterman Lanigan Racing) and Josef Newgarden (Penske) also finishing within a second of him.

While the Borg-Warner Trophy is on permanent display at the Indianapolis Motor Speedway Museum, since 1988 BorgWarner has created a 14-inch tall version – the so-called ‘Baby Borg’ – as a keepsake for the winning driver. This weighs five pounds and is mounted on a marble base which carries the same sterling silver bas relief likeness of the driver’ face.

Since ’98, the company has created a keepsake trophy for the winning team owner, too, again containing the sterling silver Baby Borg but with a band of art deco racing cars, accented in gold, to symbolize the importance of teamwork in racing.

“The Indianapolis 500 is one of the most coveted race wins in all of motorsports and it is BorgWarner’s honor to present the keepsake trophies to Simon and Roger,” said Fred Lissalde, CEO, BorgWarner Inc. “Roger has set a standard of excellence at the Indianapolis 500 that may never be broken. His success at one of the toughest races in motorsports is truly historic.

“Presenting the Baby Borg to Simon, a fellow countryman from France, for winning the Indianapolis 500 is personally a joy for me."

Pagenaud, who led 116 of the race’s 200 laps, said: “Seeing my face on the trophy was a unique experience of gratefulness and pride. BorgWarner has been such an amazing partner in building traditions around the Indianapolis 500.

“Because of these traditions and the fact that this trophy is the most valuable trophy in the world, it continues to build on the reputation of the fastest race in the world. I am mesmerized to see my face next to my models and heroes.

“Being part of the 500 club and thanks to BorgWarner having an engraved proof of that is very special. It is the only race and trophy in the world which allows you to travel through time like an artist may have done it with his art.”

In addition to awarding Pagenaud his Baby Borg trophy, BorgWarner also donated $20,000 to IndyHumane – The Humane Society of Indianapolis, a favorite charity of Pagenaud’s dating back to when he lived in the Indianapolis area.

Since 1905, IndyHumane has provided shelter for animals and teaching the community about animal adoption. Simon fostered a dog for IndyHumane during the Month of May in 2014 and has participated in their signature fundraising event, Mutt Strut at IMS.

While this is Pagenaud’s first Baby Borg trophy, it is his team owner’s 18th – 13 more than Penske's nearest competitor, stretching back to Mark Donohue’s 1972 triumph. Team Penske has earned 541 major race wins, 617 pole positions and 34 championships.

The Borg-Warner Trophy was created in 1936 as a symbol of technology and innovation in racing. As the oldest, most famous trophy tradition, it is the most sought-after motorsports prize and is valued at $3.5m.

In recent years it has traveled to Japan to accompany Sato, to the Goodwood Festival of Speed in the UK, and to Paris, France, this year with Pagenaud.