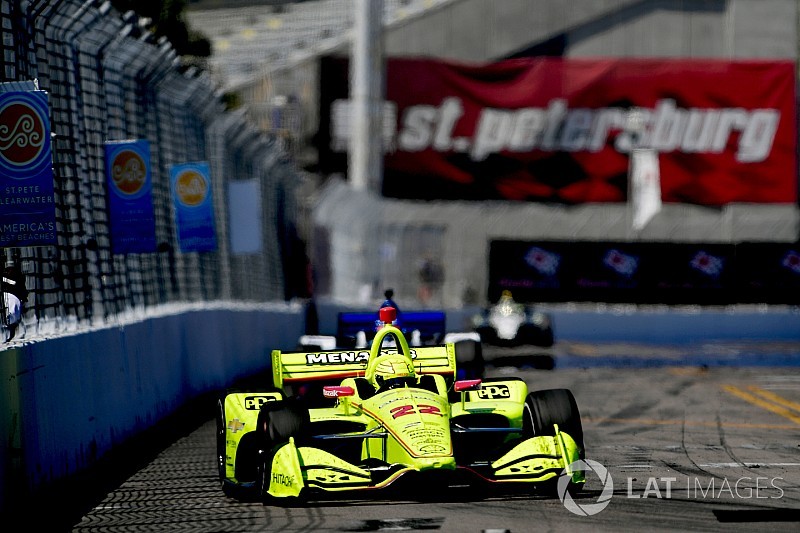 Penske's poor start to the 2018 IndyCar season at St. Petersburg was a one-off, according to 2016 title winner Simon Pagenaud.

Will Power had started the race in second but spun at the narrow Turn 2 when challenging Robert Wickens for the lead on the opening lap.

Instead, it was reigning champion Josef Newgarden who ended up as Penske's highest finisher in seventh, with two Andrettis and one Ganassi driver ahead of him.

Power would then finish 10th, with Pagenaud three places further back.

Pagenaud says that the St. Petersburg result is not concerning for a team aiming for a third consecutive IndyCar title.

"I think it's a one-off, really," he said. "I think we had the pace. We all just had different problems.

"We had a [tire] gun problem on the first pitstop, [when] we were seventh. It wasn't bad considering qualifying [starting in 11th], so we recovered, but then we restarted 20th. It just didn't work."

Power explained that the new universal aerokit was partly to blame for the results, with the first race of the new designs featuring a high amount of overtakes and driver errors.

"You make a mistake and you're going to suffer for it, as you saw today. It's just typical of a spec car, just very good competition.

"I think there was no expectation to come here and kick everyone's ass. I can tell you that. We knew from testing and just from the fact that it's one-make, it's going to be tough."

Having worked his way back inside the top 10 contact with Jack Harvey forced an unscheduled stop before he recovered to seventh at the flag.

"It was a messy P7 but for us it was a good top 10," he said. "It's a decent start to the year. We had a great Chevy package - it's just sad we couldn't take better advantage of it. I felt we had really good power today from Chevrolet.

"We were just fighting all day to catch back up and we were on the wrong end on the fuel mileage and getting run into and cutting the tire didn't help us.

"But I think if a couple of things would've gone differently, I really think a podium finish was in the cards for today."

Coyne on remarkable Bourdais win: “We didn’t have a top-three car”

Video: Who was to blame in Wickens v Rossi IndyCar clash?