The Team Penske-Chevrolets of Indy 500 polesitter Simon Pagenaud and Josef Newgarden finished first and second as the 33 drivers turned almost 2500 laps in two hours of practice. 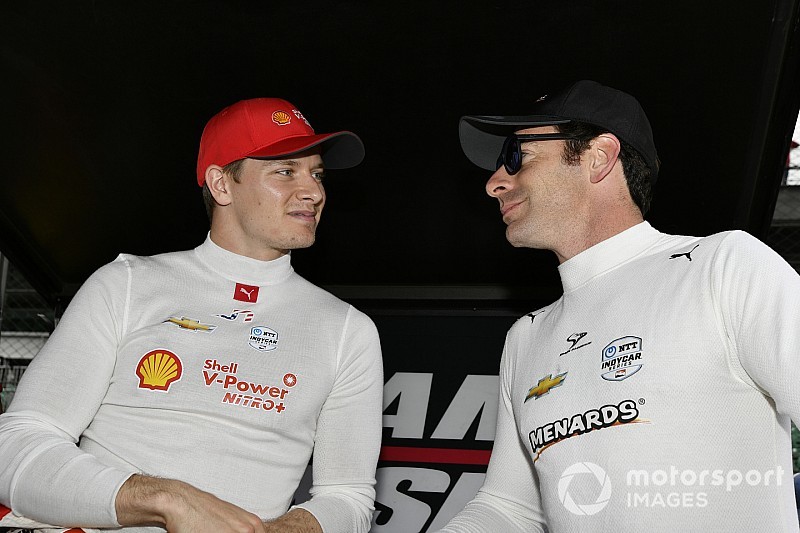 With the cars back on ‘regular’ superspeedway 1.3-bar boost and on heavier raceday downforce trim, Pagenaud and Newgarden still managed to break the 228mph barrier, Pagenaud turning his 228.441mph speed with his 88th and very last lap of the session.

He wasn’t the busiest driver – that was 2017 Indy winner Takuma Sato of Rahal Letterman Lanigan Racing-Honnda – but the luminous Menards car looked very comfortable in traffic in the dense air of the day.

Another driver who seemed able to run anywhere on the track and hang close with the car in front through the turns was Andretti Autosport-Honda’s 2016 winner Alexander Rossi who finished the session in fifth.

Separating him from the Penskes was James Hinchcliffe who bumped his Arrow Schmidt Peterson Motorsports-Honda onto the last row of the grid yesterday having shunted in Saturday qualifying, and Chip Ganassi Racing’s Scott Dixon who was noticeably hugging the white line at the bottom of the track through several turns – the opposite approach to Helio Castroneves who steers well clear. Penske’s three-time Indy winner was seventh, slightly slower than the sole Carlin-Chevrolet that made it through qualifying, that of Charlie Kimball, and slightly faster than Will Power.

Felix Rosenqvist made it two Ganassi cars in the top 10, but the Swede inadvertently caused a minor incident, when he felt himself drifting wide in Turn 3 as Ryan Hunter-Reay dived through on the inside. The rookie’s corrective lift off the throttle saw him shedding speed quick enough to catch out his compatriot and fellow-newbie, Marcus Ericsson in the second Arrow SPM. The black-and-gold car drifted up and rubbed the wall with his right-rear tire

As well as how comfortable their cars feel in traffic, drivers were also practicing how much fuel they could save running in the draft of their rivals.

The reason for there being 34 speeds is that Tony Kanaan tested Matheus Leist’s car as well as his own.