Pigot’s first IndyCar podium a “weight off the shoulders” 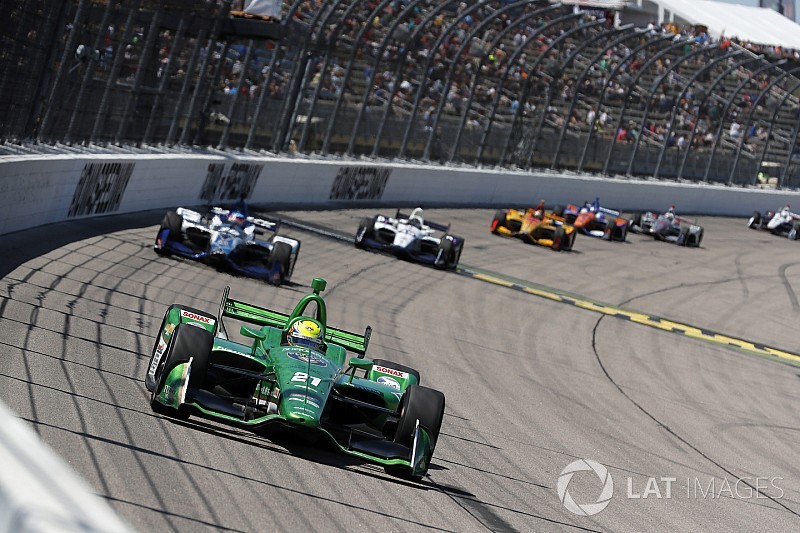 Spencer Pigot, who became Ed Carpenter Racing’s full-time driver this year, says that scoring his first podium in the IndyCar Series was a relief and was simply the result of a strong car and a day where “everything went right.”

The 2015 Indy Lights champion made his three Mazda scholarship IndyCar outings with Rahal Letterman Lanigan Racing in the first quarter of the season, but joined Carpenter’s team after Indy as the road/street course driver in the #20 car, sharing with the team owner who races ovals only.

For 2018, Carpenter replaced JR Hildebrand with Pigot as the full-timer in the #21 car, and yesterday Pigot continued ECR’s strong form at Iowa Speedway. The #21 car won there in 2016 with Josef Newgarden, finished second last year with Hildebrand and then second again on Sunday.

Although Pigot qualified only 18th, his pass on Scott Dixon on Lap 54 got him into the top 10, following the first round of pitstops he ran fifth, and from Lap 112 of the 300-lap race, he was into the top three.

Thereafter he had two separate battles with eventual winner James Hinchcliffe over what was then second place, slipped to fourth behind Robert Wickens in the final stint but landed the runner-up finish when Newgarden and Wickens ceded track position under the final yellow.

"It's definitely a great feeling to be on the podium," he said afterward. "I think that at certain times the past couple seasons we've had the pace to challenge for the podium, and one thing or another happened and it didn't quite work out, so it's nice to have it all go smoothly and we were able to really capitalize on everything that was going on.

"It's very satisfying, and yeah, a nice weight off the shoulders to be up here on the podium and have a really good result."

Regarding the changes made to the car for the race, after qualifying on the ninth row, Pigot said: “We definitely made a few changes, nothing crazy, nothing massive, just tried to kind of fine-tune it a little bit. I think last night in the second practice we were a little bit more competitive than the time sheets suggested, so I think we felt cautiously optimistic.

“But I definitely wasn't sure we were going to have as good a car as we did, but the changes we made obviously worked out well, and with the heat of the day, we didn't seem to degrade quite as much as a lot of other guys… Right from the get-go, I knew we had a fast car and as the stint went on, I just thought we got stronger and stronger and were really able to close down and pass people.

“The guys in pit lane did a great job and executed really well. We've had a season that I think we could have executed a little bit better at times, but today everything went right, and we found ourselves on the podium, so it's definitely a great feeling.”

Pigot says the adjustments made to the car in pitlane on raceday had been minimal.

“Honestly the only changes we made were tires,” he said. “Never touched the wings. I think we might have done a little tire pressure. But they were asking me what I wanted, and I just said, ‘leave it alone.’ It felt good. I think we're probably one of the few people out there who didn't touch the front wing throughout the whole race, and maybe that was a good thing, maybe it was a bad thing.

"Definitely at the end there it seemed like James and Josef had a little bit more pace than us, but I was comfortable with the car and didn't really want it to do anything different.”