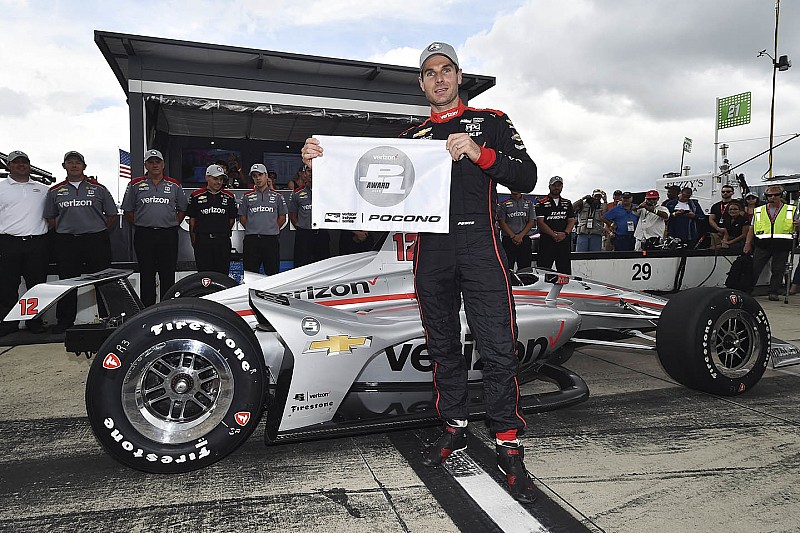 Team Penske-Chevrolet’s Will Power has joined IndyCar icon AJ Foyt in second on the all-time pole-winner’s list with the 53rd top spot of his career during qualifying at Pocono Raceway.

Power’s third pole of the year was earned with the only two-lap average over 219mph around the 2.5-mile tri-oval, setting a remarkable 219.942 on his first lap, and a 219.080 on his second. Power will be aiming for his third straight win at Pocono tomorrow.

With qualifying order decided by car entrant points, Dale Coyne Racing rookie Pietro Fittipaldi opened the session by setting a 214.336sec target, but this morning’s pacesetter – another rookie, Zach Veach – really threw down the gauntlet with two laps over 217mph.

That effort withstood a stern attack from Rahal Letterman Lanigan Racing’s Takuma Sato – the man who he replaced at Andretti Autosport, and last year’s polesitter – but Sato’s second lap was more than 1mph slower than his first.

There was a similar dropoff for Pagenaud, but from a higher level – the first 218mph lap of the session – and the Penske driver claimed provisional pole. Robert Wickens then further demoted Veach with a very consistent pair of laps.

But Hunter-Reay learned well from his teammate Veach’s pace this morning and his consistency edged Pagenaud despite neither of his laps getting past the 218 barrier.

However, Power’s run put everyone into perspective, some 1.7mph ahead of Hunter-Reay, while Newgarden bumped the Andretti Autosport driver down to second.

Alexander Rossi proved to be fastest of the Andretti Autosport quartet to claim third and ensure four of the top five in the points standings occupied the first four slots on the grid.

The missing man is Chip Ganassi Racing-Honda’s Scott Dixon, who looked superb through Turn 3 but had to get off the gas severely through Turn 1 on both his laps and will line up only 13th.