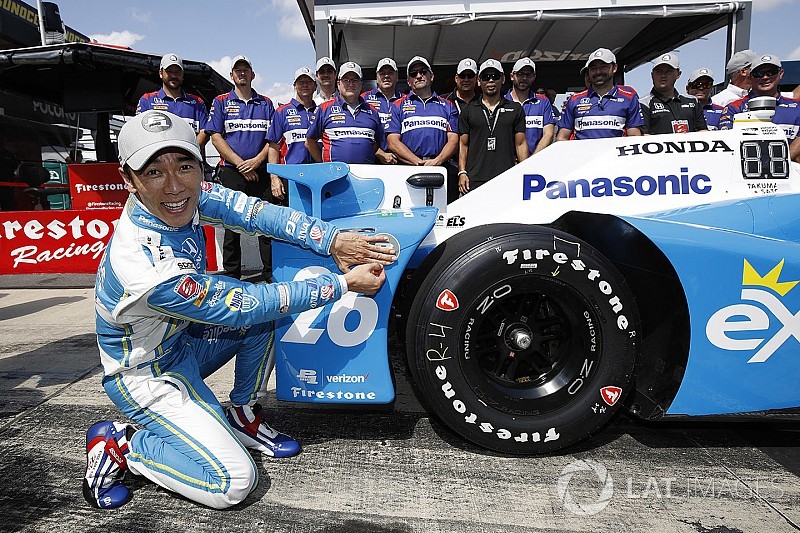 However it was a day of mixed emotions for team owner Michael Andretti. Hunter-Reay had to be helped from his car which pancaked against the wall with the left-side, after wriggling out of control at Turn 3 at the end of his warm-up lap, and had to limp to the ambulance with the aid of two safety crew members. Alexander Rossi blew his first lap despite having the potential for pole, and Marco Andretti struggled with adjustment to his car as track conditions changed.

Simon Pagenaud took an excellent second place for Team Penske-Chevrolet on a weekend when Honda appeared to have the edge, clocking a 219.395mph average to beat Chip Ganassi Racing-Honda’s Charlie Kimball and Tony Kanaan and Penske teammate Will Power, who was second driver to hit the track.

Graham Rahal was seventh fastest for Rahal Letterman Lanigan Racing-Honda to beat the other star of the weekend, besides Sato. Gabby Chaves, in only the third race weekend for Harding Racing, was eighth fastest, and third quickest Chevy driver, beating the Ganassi cars of Scott Dixon (who admittedly was first car on track) and Max Chilton.

Points leader Josef Newgarden was a disappointing 14th, but he was happier than the fourth Penske of Helio Castroneves who shunted at Turn 1 on his first lap after setting fastest warm-up speed to that point.

The third driver to not complete a qualifying run was Ed Carpenter, who wasn’t allowed to even start one. Following his shunt in the morning practice session, his Ed Carpenter Racing-Chevrolet team failed by just six minutes to make the tech inspection line with its repaired car.