Zach Veach put Andretti Autosport-Honda on top in opening practice for Sunday’s ABC Supply 500 at Pocono Raceway, ahead of Team Penske-Chevrolet’s Josef Newgarden and his own teammate Alexander Rossi. 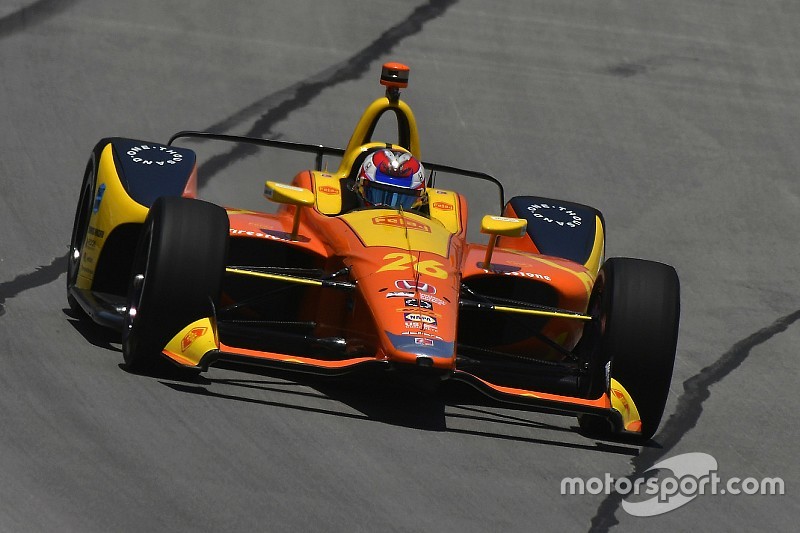 In a session that saw drivers and teams experimenting with wing extensions and wickers in accordance with IndyCar’s revised superspeedway package, the rookie lapped the tri-oval at 217.393mph. He also set second-fastest no-tow speed 214.233mph.

Last year’s Pocono runner-up Josef Newgarden was 0.0719sec slower, around 0.37mph, and a mere 0.02sec faster than Rossi, in a session that was put on hold for 30mins as track 'weepers' were dealt with.

Sebastien Bourdais was a strong fourth for Dale Coyne Racing with Vasser-Sullivan Honda, ahead of points leader Scott Dixon of Chip Ganassi Racing, while Tony Kanaan was sixth overall and second-fastest Chevy for AJ Foyt Racing.

The Rahal Letterman Lanigan Racing-Hondas were slow at the start of the session, but jumped into the top 10, behind the second Penske of Simon Pagenaud and ahead of Schmidt Peterson Motorsports-Honda and James Hinchcliffe.

Penske’s defending and two-time Pocono winner Will Power was 11th, while Marco Andretti and Ryan Hunter-Reay in the other two Andretti cars were surprisingly only 14th and 17th respectively.

The teams’ efforts to run qualifying simulations may prove pointless, however, since there is very uncertain weather in the area, and qualifying is due to start in 1.30pm local (ET) time.