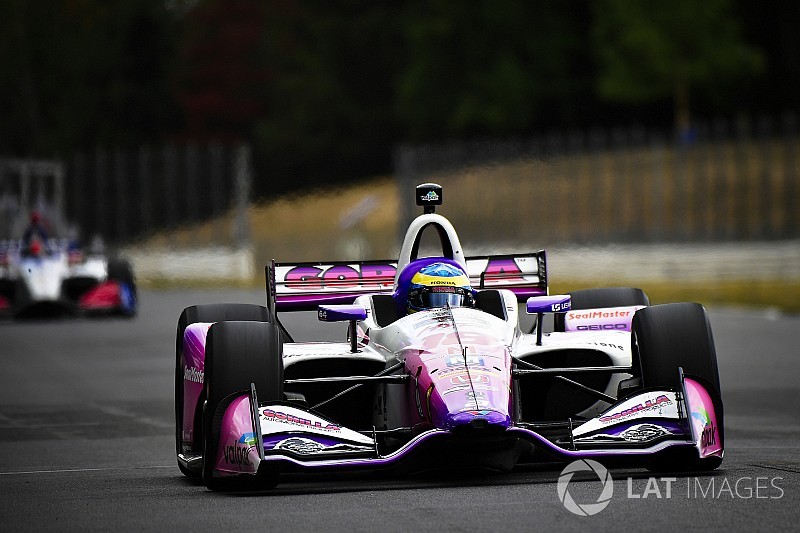 The Dale Coyne Racing with Vasser-Sullivan Honda driver set a best time of 57.398, equating to an average of 123.183mph to head championship leader Scott Dixon in the Chip Ganassi Racing-Honda by a mere 0.0246sec.

Dixon, who suffered a harmless Turn 2 spin, was forced to skip the last five minutes of the 45min practice session as punishment for twice taking the checkered flag in yesterday’s open test. However, he didn’t miss much at all, because the final five minutes were ruined by two red flags, caused by Zach Veach (Andretti Autosport) and Alfonso Celis Jr. (Juncos Racing) getting the Turn 10/11 complex wrong and needing rescuing.

Thus the final times are somewhat inconclusive, but Josef Newgarden was lead Team Penske-Chevrolet driver on a 57.584, around two-tenths ahead of teammate Will Power, and separated by Marco Andretti who, as yesterday, was the fastest of the Andretti Autosport machines.

Jordan King looked stronger than he’s looked since the first quarter of the season, putting Ed Carpenter Racing into sixth, 0.39 off the top, and ahead of Alexander Rossi who is trying to erase Dixon’s 26 point lead over him in the points standings.

Takuma Sato was the faster of the Rahal Letterman Lanigan Racing-Hondas in eighth with Ed Jones making it two Ganassi cars in the top 10 and Veach completing it.

Jack Harvey, in Michael Shank Racing’s first race since Mid-Ohio, slotted into 11th, and Santino Ferrucci also performed commendably on only his second weekend of IndyCar racing, putting his Dale Coyne Racing-Honda in 12th. Teammate Pietro Fittipaldi did not turn any laps due to a major brake issue.

Carlos Munoz, subbing for Robert Wickens this weekend, was only 22nd, despite being only 0.25sec off Schmidt Peterson Motorsports teammate James Hinchcliffe. The top 21 cars were covered by 1 second.