Will Power says that matching AJ Foyt in IndyCar’s pole-winning tally was something he’d never expected but for now he remains focused on trying to close his current points gap to Scott Dixon. 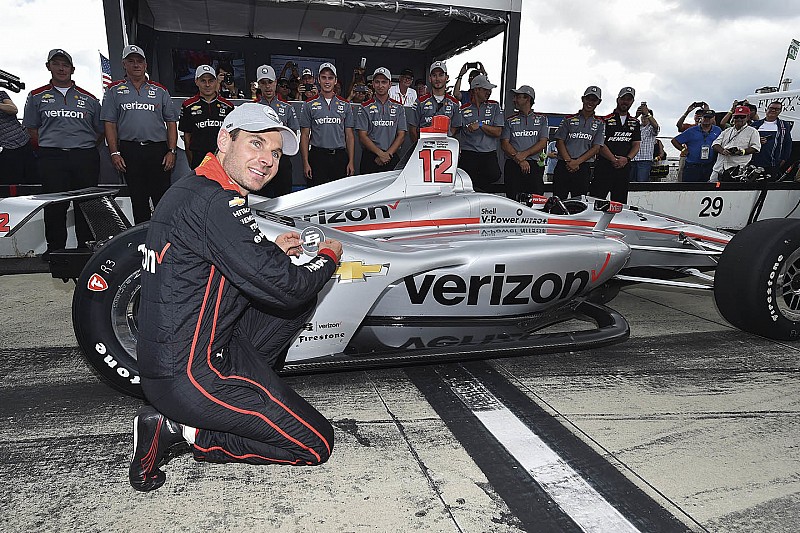 Power’s third pole of 2018 and 53rd of his career, scored at Pocono Raceway this afternoon, elevates him to joint second with Foyt in the all-time IndyCar record book. However, Mario Andretti remains a further 14 poles out in front.

Said Power: “It sounds very cool. I never thought I'd be up in that sort of company, to be next to A.J. Foyt's name. I wouldn't have expected that when I started my career; it’s so amazing.”

Asked if he thought Andretti’s mark was reachable, Power admitted: “I thought about that… and I thought about how many times I've lost pole by like a hundredth of a second this year!

“It is possible to reach that,” said Power who has re-signed a multi-year deal with Penske despite an approach from McLaren, “but [for now] I’m just happy to be next to A.J. Foyt.”

Power said that his pole was a result of taking out more wing than his teammates, as he turned a first lap some 1.3mph faster than anyone else’s. When his second lap was also above the 219mph barrier, pole was his – eventually by a margin of 0.7mph.

“I trimmed out a bit more,” he said. “Obviously the car was handling reasonably well. Very, very good, solid first lap – big first lap. Obviously dropoff in the second lap – I had to lift out of Turn 1 – but it was still fast.

“We just nailed the gear and everything for that run, so it was very nice.”

“I really enjoy the track,” said the 2014 IndyCar champion and reigning Indy 500 winner. “It's such a competitive series. You never know how you're going to stack up week in, week out, but we've been quick everywhere and I expect to be running at the front tomorrow.

“We just need to have a good day in relation to Scott, because that's the points deficit that we need to close. Couple of guys in front of me [Alexander Rossi and Josef Newgarden] are easily able to be caught, but Dixon's lead is pretty big for me. I need him to have a bad run, I need to have a good run to have a good shot at him at the last race.”

Power went on to give credit to IndyCar’s technical team for not only the new-for-2018 spec Dallara aerokits but also the recent revisions to IndyCar’s superspeedway package to allow cars to run closer through high-speed turns.

“I think they nailed it in a lot of respects,” he commented. “It looks better. It definitely performs better as far as racing goes.

“Obviously they're still tweaking a few things for certain tracks, but all in all it's a very nimble, fun car to drive. I think Jay Frye, Bill Pappas and Tino Belli really have done a great job this year in every respect. Such a strong group on the competition side to have at IndyCar.

“I think this car drafts really well: I just didn't get a feel for it in [morning] practice. I think it will be good racing, similar to Indy. I mean, Indy this year was the worst-case scenario as far as grip goes, it was such a hot day. Doesn't matter what bodykit you have on a hot day like that, it's difficult with track temp that high.

“Seems like a pretty nice day tomorrow as far as being cool. So, yeah, we'll see. Time will tell. As you saw, there were a few different configurations of the bits you're [now] allowed to use. Every wind tunnel gets different reads. [The latest changes] just put the front wing in a better range, basically.”

More from
Will Power
IndyCar / Results