Focus forward to 2013, Power says, at Chevy test: Eleven weeks had passed since Will Power left his crippled race car and broken heart in a garage at Auto Club Speedway. 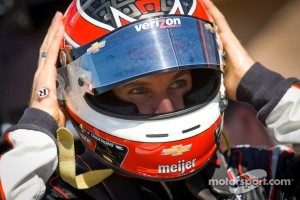 The driver of the No. 12 Verizon Team Penske car fell three points shy of securing his first IZOD IndyCar Series championship after the combination of a crash in the season finale and a fourth-place finish by his title rival gave the crown to Ryan Hunter-Reay of Andretti Autosport.

But that's all history, according to Power, who wound up the series' championship runner-up for the third consecutive year. Preparing for the 19-race 2013 season -- during a test day on the 2-mile Auto Club Speedway oval Dec. 4 -- is somewhat cathartic. Power and five other drivers whose cars are powered by the Chevrolet 2.2-liter, twin-turbocharged V6 engine used a clear and comfortable day at the track for validation and development.

"Chevy has given us great support and they continue to work hard to get us the best engine in the field. I am really looking forward to 2013 and putting it all together. We keep getting close but not quite there for the championship. I think we know what we need to do to win a championship, and with me, the team and everyone focusing we can hopefully do it."

Power was joined by Team Penske teammate Helio Castroneves, who will join Tony Kanaan and Rubens Barrichello to compete in a Brazilian stock car race this weekend for charity, Marco Andretti of Andretti Autosport, Sebastien Bourdais of Dragon Racing, and Ed Carpenter of Ed Carpenter Racing.

The testing window for 2012 closes Dec. 14, and several drivers will be on the Sebring International Raceway short course Dec. 12-13 to test.

"It really made our year last year with Ed Carpenter Racing and Fuzzy's Vodka to win the race at Auto Club Speedway," Carpenter said of the first-year team. "When they told me they were sponsoring Victory Lane it put even more pressure and desire to get them there. It's good to come back to a track where you have had success at. This is going to be a big race again next year, too (as the final round of the Fuzzy's Triple Crown)."

Drivers and teams ran through items requested by Chevrolet engineers and then worked on their own litany of car changes.

"We've been out of the car for a long time, it's always good to be back in the cockpit," Andretti said. "We're having some fun at Auto Club Speedway and doing some work for Chevy to keep improving into next year. The morning part of the test was for Chevy and in the afternoon we are making some mechanical changes to our car. We didn't have much trouble qualifying well here (he earned the pole), but we sure need to do better on the race set-up."