Power: “You’ve got to be smart because anything can happen” 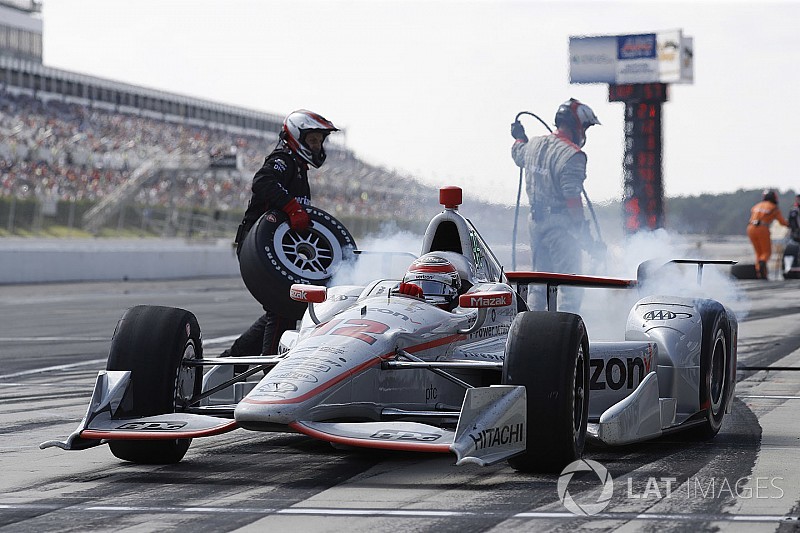 Will Power, who came from a lap down to win his second straight Pocono 500, said keys to victory were being smart and not giving up despite needing a front-wing change and a rear-wing change.

The 2014 IndyCar champion, for whom this was his 32nd win, was shuffled back in the second stint when his front-wing adjuster let go and laid them flat, losing him a lap, and later had a whole new rear-wing assembly fitted due to damage incurred when an unsighted Charlie Kimball hit him as he moved to avoid a sideways James Hinchcliffe.

However, going off strategy allowed him a clear track to set startlingly fast times three stints from the end, so that he emerged from his second from last pitstop with a 4.2sec lead. Despite Josef Newgarden and Rossi edging up to dog his wheeltracks over the final 10 laps, Power hung on to win.

“What a crazy day for us!” he said afterward. “I mean, we had a really strong car. We were getting back to the front, and then suddenly, boom, the [front] wing broke. Lucky I didn't hit the wall.

“Went a lap down, and then I was just thinking, ‘Be smart, anything can happen. You could get your lap back and get through the field…” and that's exactly what we did. So a very, very good day.

“Once I got my lap back, I was like, ‘All right, it's game on, I can definitely get back up there.’ I was thinking like a top 5, but when I was pumping out 217mph laps, I'm like, ‘OK, we're going to make some serious hay here.’ We changed the rear wing because that pod was broken, and obviously the front wing broke. The guys did a fantastic job in the pits, having to do all that and still we were able to go on and win the race.

“Once we went a lap down, I mean, you just hang in there and then try and get your lap back, and then you're fighting a lot of traffic, trying to be smart on those restarts, like you didn't want to get involved in an incident.

“I wasn't really aware what everyone else was doing. All I knew is that we had clear air as people peeled off to pit and we could pump out some fast laps.”

Power said that into the final stint his focus was entirely on his teammate. Newgarden on lighter downforce drew up onto the tail of the #12 car and so Power elected to heavily protect the inside line down to Turn 3, three times swinging hard left, aware that’s where his championship-leading teammate would attempt to make a pass.

“I had no clue who was in the game until the end, when they said ‘Josef is closing on you.’ Once Josef got to me, the only place he was going to be able to pass was into Turn 3, so I got very aggressive with blocking [that line] and making sure he did not get up the inside. If he got up the inside, it was over. With how close he was in Turn 2, if I left that open he would pass me and he would win – he goes through any little gap! So I wasn't leaving any chance of him going all the way to the inside, so I was very aggressive and it paid off.

Power remains fifth in the title race, but has closed the gap to leader Newgarden to 42 points. Asked if it was feasible to grab the title from his young teammate now that there are three races to go and the last round at Sonoma is a double-points race, Power was adamant.

“Yeah, absolutely, absolutely,” he said. “When you think about the finish to last year, which was basically three DNFs in a row if you include a non-finish at a double-points race, it's like the worst finish you can have. So I’m really determined to finish on a high this year – really determined. I don't want to have that again. It was frustrating the way we finished last year, so I'm going for it now.”