Confusing formats are not the way to bring fans back to the IndyCar series.

Let's be honest, changing racing formats up to create attention and increase fan interest sounds like a good idea until one recognizes that the elements that have changed will not be televised. That's right, for Iowa Corn Indy 250 presented by DEKALB, the three 50 Lap sprint races (150 Laps total) to be run Saturday evening, used to establish the starting order (with bonus points awarded for positions 1-12 earned) of the official points paying race on Sunday, will not be televised.

This excerpted and edited from IndyCar.com -

The heat races include transfers to Race 3 for the top two finishers in the first two qualifying races.

Positions in the three heat races will be determined by single-car, single-lap qualifying (4 p.m. ET) on the .875-mile, variably-banked oval. A blind draw will determine the qualifying order. Practice (11:45 a.m.-1 p.m. ET) and qualifying also are featured on indycar.com and INDYCAR 13 with Timing & Scoring and the IMS Radio Network call. 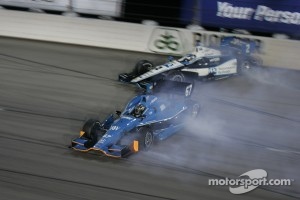 Here's the format, which adds the lure of bonus points – from nine points for the Verizon P1 Award winner and descending by one point each position to three points for seventh-eighth, two points for ninth and 10th and one point for 11th and 12th:

Race 3 -- Will consist of positions 1 through 6 from single-car qualifying plus the first- and second-place finishers from Races 1 and 2 to determine the pole winner and the first five rows of the starting grid.

As far as the race is concerned, IndyCar, with its patchwork of television broadcasting of points paying races will have Iowa Corn Indy 250 presented by DEKALB be presented by the network general broadcast outlet of ABC and its affiliates. Anytime IndyCar can appear on general broadcast versus cable only outlets increases access and should be the major consideration for fan base expansion going forward post unification.

The lack of televised coverage (Cable Only or General Broadcast) for the 150 Laps of qualifications racing (more than half of the number of laps to be run in the race itself on Sunday), seems really counter-productive to fan interest development, especially when one includes the complexity of the 3 Heat Race format.

...notes from the EDJE