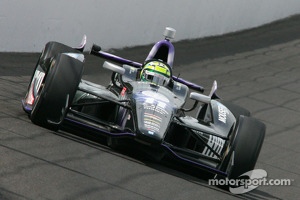 Six drivers turned laps on the 2.5-mile oval, and engineers from teams and Firestone pored over the extensive data with the long-term goal of developing tires that will help drivers break the all-time speed records for "The Greatest Spectacle in Racing" set in 1996 by Arie Luyendyk.

The test will resume from 9 a.m.-5 p.m. Wednesday, Sept. 11. Fans may watch the action for free from the South Terrace Grandstand and Turn 2 viewing mounds. Thursday, Sept. 12 is the designated rain date.

Hulman and Company Chief Executive Officer Mark Miles and INDYCAR President, Operations & Competition Derrick Walker in May announced the intent to see Luyendyk's four-lap (236.986 mph) and one-lap (237.498 mph) qualification records surpassed. The goal is to challenge those speed records during the 100th running of the Indianapolis 500 in 2016.

"Certainly we're trying to lay a good foundation for being able to run laps like that for the future, and it's going to involve a lot of work between ourselves and INDYCAR to make sure we understand the targets and that we're working to achieve the same goals together," said Dale Harrigle, Firestone Racing chief engineer.

2006 Indianapolis 500 Chase Rookie of the Year Andretti is happy to pursue record speeds at Indianapolis and appreciates the challenge.

"Bring it on, man," Andretti said. "I'm always for that, for sure. I think for four laps in qualifying it would be fine. Ten miles an hour is easier said than done once you get above the 230 (mph) range, but it's average 10 miles an hour, not just 10 miles an hour, so you need to be like 15 to 20 miles an hour quicker, so that makes a heck of a difference, but that's why they pay us the big bucks."

Franchitti also is intrigued by the run for the records and pointed out that Firestone has the acumen to develop a safe, consistent tire for the challenge.

"Derrick Walker and his team have talked about going after the speed record, and that would be interesting," Franchitti said. "Obviously, the cars and the engines need a little bit of work to get there, but it's nice to see there's a plan in place to kind of make that a reality. Every time we run on track they learn something, so Gil (de Ferran) did a 242 (mph) average at Fontana (241.428 mph in 2000), so they know how to make a tire that can exceed the track record here."

"I think the aim is to start heading toward that by 2016, which is very achievable with this car for sure," Power said. "Obviously, you've got to keep safety in mind, but also we do want to break that record. So as the safety improves, we can bump the speed up."

Testing this week at IMS also will give the participating drivers and teams a head start on the 98th Indianapolis 500 next May.

"This kind of test is huge, especially for a driver and a team, because when we come away from here with a tire choice, and they let us know which one we're going with for 2014, the guys testing here today will have a bit of a head start," Andretti said. "Obviously there's plenty of track time come Indy, but to have a day over the rest of the people really helps."

Indianapolis 500, the tire data they accumulate at IMS will benefit all teams in the IZOD IndyCar Series.

"The most important thing here today and tomorrow is actually to help Firestone to pick up whatever they want to pick up as far as a tire compound," Kanaan said. "We're here for them. It's actually unbelievable, and you guys probably don't know this, but we're through probably 25 sets a day as far as seven laps each, and tomorrow we'll do long runs, so it's a lot of work."

A surprising element during the test is unseasonably warm temperatures in the low 90s.

"We expected it to be a lot cooler," Franchitti said. "We've tested this time of year before, and it's not that relevant, really. (But) with 90-plus degrees and humidity, we're learning a lot. Firestone is going to learn a lot, too, and Honda is finding stuff, as well, so it's really a win for everybody. When you're asked to come and do these things, it's a request you can't turn down."

Dixon on the hot seat