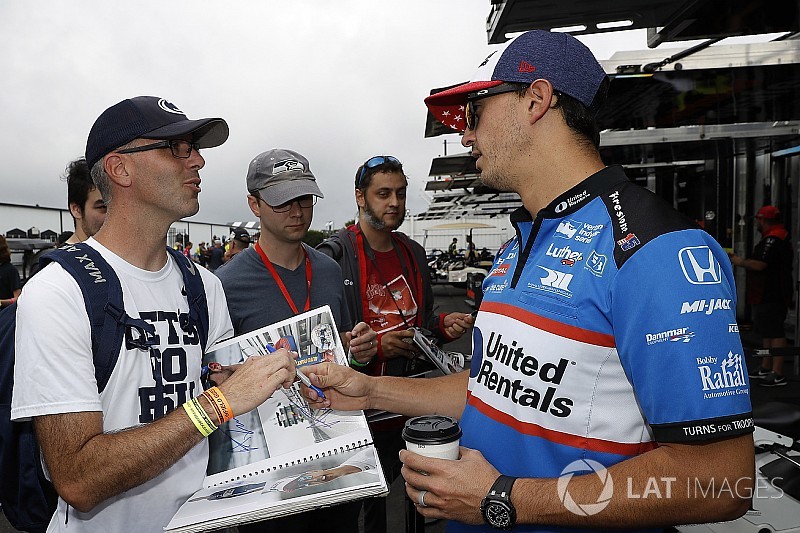 Graham Rahal says fans deserve to see the IndyCars on track as often as possible, which means reintroducing Sunday morning warm-ups at all tracks.

IndyCar ovals traditionally don’t feature morning warm-ups, with second and final practice coming after qualifying – usually at a similar time to the race the following day. But this year has seen IndyCar also deleting raceday warmup on permanent road courses, with the stated intention of giving a shorter working day for the crews.

However, when Motorsport.com asked Rahal if he felt the loss of raceday warmup sessions has hurt his team, particularly in a year when everyone’s trying to learn the new aerokit, he instead said the warm up should be brought back for the sake of the fans.

“Mid-Ohio, everybody was like, ‘Where were you guys? We came here to see you guys, there was nothing going on.’

“So that needs to probably change. It's just too important to have these cars on track for fans to enjoy.”

He also thought that an exception should have been made to traditional IndyCar methodology last weekend at Pocono Raceway, when the teams had only one hour of practice, followed by qualifying, before the race was green-flagged. Second practice on Saturday afternoon was canceled due to rain, and while there was ample time in the Sunday schedule to accommodate another hour of practice, that opportunity that was not taken.

“I'm fine at certain places with not having warmups,” said Rahal, “but I thought Pocono was a big mistake to not have a practice – and there was really no excuse for not having a practice. That was disappointing.”

On the subject of whether less track time had affected RLLR more than other teams, he replied: “Maybe a little bit. But I would say in a lot of places, we haven't started really on target, and when you don't start on target, you're just chasing. You really need to show up and just be in a good spot, and then it's just fine tuning from there on out. And we haven't been in that spot yet this season.

“You know, let's hope it will turn around. We've got, like I said, Portland, we've got a test there. As we go on from there, Sonoma, we have a test there. So hopefully we'll be a little better off.

“But there's a lot of elements that go into this. We've had opportunities this year, and it just hasn't worked out, and then we've had races where… it should have worked out and we shot ourselves in the foot. So it's been a little bit all over the board.

“I think everybody [on the team] is probably just a touch frustrated with the way it's gone, and that kind of leads to more mistakes and things like that. Just going to hunker down and finish this thing off as strong as we can.”

Rahal said that, despite RLLR’s slight fall from the level that saw him finish in the top six in the championship for the last three years, the team’s expansion to include a second car for Takuma Sato has been helpful, despite the 2017 Indy 500 winner’s different driving style.

“I think having the data has definitely been good,” he said thoughtfully. “You know, Takuma and I – I don't know that our driving styles are that different. I know what we're sensitive to is different. He’s more willing to hang on to a loose car than I probably am, on an oval in particular. Sometimes I worry about the rear and they're not as focused on it, and so that kind of leads us astray at times.

“But in general Takuma has been really good for us. I think if we can manage to just make that happen for next year and keep the same group together, I think it'll help us even further. Overall it's great to have two cars. For our team to have the growth and everything that we've had and experienced, it's been good.

“I think that we also together have been able to identify areas that we feel like we're just not that strong right now and where we need to work on and be a little bit better, so that will help us, as well.”