Graham Rahal waited until the end of qualifying to unleash an incredible four-lap run to score the pole for tomorrow's Road Runner Turbo Indy 300 at Kansas. The 20-year-old Ohio native was the only driver at an average speed more than 211 mph, at ...

Graham Rahal waited until the end of qualifying to unleash an incredible four-lap run to score the pole for tomorrow's Road Runner Turbo Indy 300 at Kansas. The 20-year-old Ohio native was the only driver at an average speed more than 211 mph, at 211.311 mph. 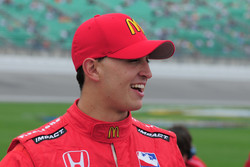 Rahal, the last car on track, now has a pole on the series' first oval event of the season to go along with the one he captured at the season opener in St. Petersburg on a street course.

"I think this one is even sweeter for the McDonald's boys," Rahal said. "To be on pole on oval is quite an achievement, and shows how hard they've worked all winter. It's incredible for us, it really is."

Rahal's run knocked Dario Franchitti, in his third livery in as many races, to the outside. Helio Castroneves, Robert Doornbos and Danica Patrick completed the top five.

That was how speeds shook out at press time, but following the qualifying sessions, both Franchitti and Castroneves' times were disallowed for dropping their left side wheels below the white line. Castroneves fell victim to the same fate at Chicagoland last year but drove to the victory from 28th on the grid.

Admittedly, Rahal scoring pole on an oval is somewhat of a surprise. Since 2006, only once on an oval has a pole position not been won by one of the series' anointed "Big Three" teams of Chip Ganassi Racing, Team Penske and Andretti Green Racing. That came when Scott Sharp took pole for Graham's father's team, Rahal Letterman Racing at Texas in 2007.

Of course, Newman/Haas/Lanigan Racing was the preeminent force in CART and Champ Car and is no stranger to oval-track pole positions. The team has worked throughout the off-season to reach the upper echelon of the IndyCar grid on the ovals after transitioning to the series last year.

To prove the pole sitter's speed wasn't a fluke, Rahal's teammate Doornbos netted an outside row two starting position. Per the penalties, Doornbos rolls off second at an average speed of 210.665 mph. 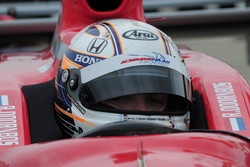 "I think everyone's pretty surprised," Rahal said. "I didn't test at Texas but "Bobby D" did. We weren't too happy at Homestead, but again, these boys have been working so hard in the off-season. Once we go to the short ovals again, we'll be strong there, too."

Rahal's previous best start on an oval was second at Milwaukee last year, an aforementioned short oval. Doornbos is making his oval debut this weekend.

Nicknamed "Bobby D" as Rahal alluded to, Doornbos is working with the original "Flying Dutchman" on ovals, as Arie Luyendyk is helping coach him starting this weekend.

"That's my secret, you just gave it away!" Doornbos joked when IMS Radio pit reporter Kevin Olson inquired about Luyendyk. "Aside of a little missed shift on the first lap, we had a good run and this format is definitely enjoyable."

Franchitti, now in the dark blue and white colors of Nicorette, held pole for the latter half of the session after bumping his teammate Scott Dixon. Castroneves went out right afterwards and fell just short of the Scotsman.

"I told my guys, let's be patient and take it easy," Castroneves said on his return to ovals. "From there on it was awesome, I was slowly trying to get back together. In the end, the car is pretty darn good!"

Doornbos was next with Patrick just behind, tops among the Andretti Green Racing quartet. She said this was the most loose, bar the first lap of her first ever qualification attempt for the Indianapolis 500, in any qualifying session of her career. 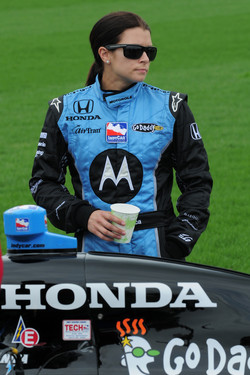 "It was the most loose I have ever been at a qualifying, ever, except for Indy the first year," she said. "For me, we had some pretty fast speeds but it was so hard to get it up to speed."

Her female counterparts Sarah Fisher and Milka Duno both return to the fold this weekend, Fisher in her own entry and Duno back in the second Dreyer & Reinbold car. Both qualified fairly well, 13th and 14th originally but promoted to 11th and 12th following the penalties.

Ryan Hunter-Reay was the slowest qualifier at 205.673 mph, as his team appears to have missed the setup this weekend.

Qualifying was delayed by 40 minutes because of an unidentified NASCAR Craftsman Truck Series driver who went out on track, blew an engine, and proceeded to oil down the entire racing surface instead of dropping below the white line.

Tomorrow's IndyCar race rolls off at 4:00 p.m. ET on VERSUS.