Rahal slams Bourdais for Indy shunt: “He obviously doesn’t get it” 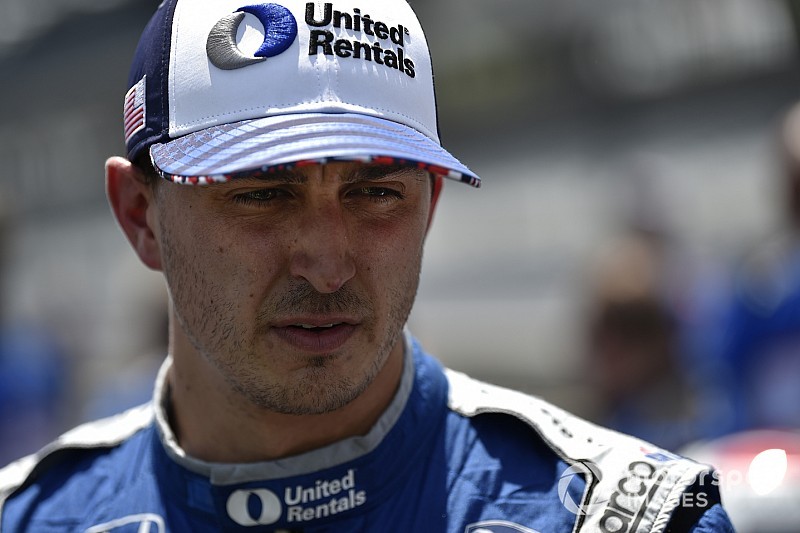 Graham Rahal was left furious with Sebastien Bourdais after their collision on Lap 178 of the 200 caused a five-car wreck that brought out the red flags in the Indianapolis 500.

The pair were fighting for sixth place – effectively fifth, as leader Spencer Pigot was about to pit – when the Rahal Letterman Lanigan-Honda drafted the Frenchman’s Dale Coyne Racing with Vasser-Sullivan-Honda and started drawing alongside on the back straight.

The Frenchman squeezed his rival toward the grass on the inside as they approached Turn 3, so that the rear of Bourdais’ left sidepod and front of his left-rear tire made contact with Rahal’s front-right tire, knocking him toward the grass, pivoting the RLLR machine… but not before its nose made secondary light contact with the DCR car.

That, combined with Bourdais having compromised his line into Turn 3 that he now had to add more steering lock, was enough to also spin the Coyne car into the wall. Behind the smoke and debris from these two spinners, Zach Veach, Charlie Kimball and Felix Rosenqvist got caught up as they tried to avoid the mess. Rosenqvist thumped into his Chip Ganassi Racing teammate Scott Dixon and sent the nose of the five-time champion’s car into Kimball’s wrecked Carlin entry, damaging the Ganassi entry’s nose-wing.

Rahal was gesturing to Bourdais even before their wrecked cars came to a halt, whereupon he swiftly extricated himself and went over to remonstrate with his rival.

Bourdais’ explanation was: “I didn’t think he had as much of the car as he did inside. It’s always a dynamic thing. He got a run, and then he kind of stalled there for a little while. And then I was there at turn-in. We made contact before we even got there. That’s what set off the whole thing because it kind of got the car wiggly a little bit before turn-in.

“It’s always easy to say I should have given up going into the corner at that point when you have to make the call whether you’re going to jump on the brakes and let the guy fly in. I didn’t really feel like side by side was an option. …I thought he was going to back off, and we were going to be OK.”

Rahal’s anger wasn’t with Bourdais trying to hang on, but with his move left. This came just two races after Race Control issued Rahal with a controversial penalty for blocking on the final lap at Long Beach.

“He drove into me,” Rahal told Motorsport.com. “I was on the inside and he turned into me and created contact. It’s dangerous. You just don’t do that, especially on an oval, particularly if someone is that far alongside you. But he obviously doesn’t care, doesn’t get it.

“But it’s a surprise from him because [in driver meetings] he’s always the one who wants to get upset about things like that and make a scene about blocking. But that was beyond blocking; that was driving into somebody.”

Bourdais was given a post-race 30sec penalty for avoidable contact, which left him classified 30th.

“I thought blocking was an issue all day,” said Rahal, “and I was disappointed in a couple of guys. I noticed even Oriol was frustrating, and I don’t understand that. With 30 laps to go, that’s when everyone is putting themselves in a position to win, so if you’re already lapped by the front two cars, you know that’s not going to be you, so why are you going to hold up the guys in fifth and sixth? First Rossi, then me. What’s the point in that? Again, surprising from him.”

Pagenaud on Indy 500 win: “Today was about attacking”