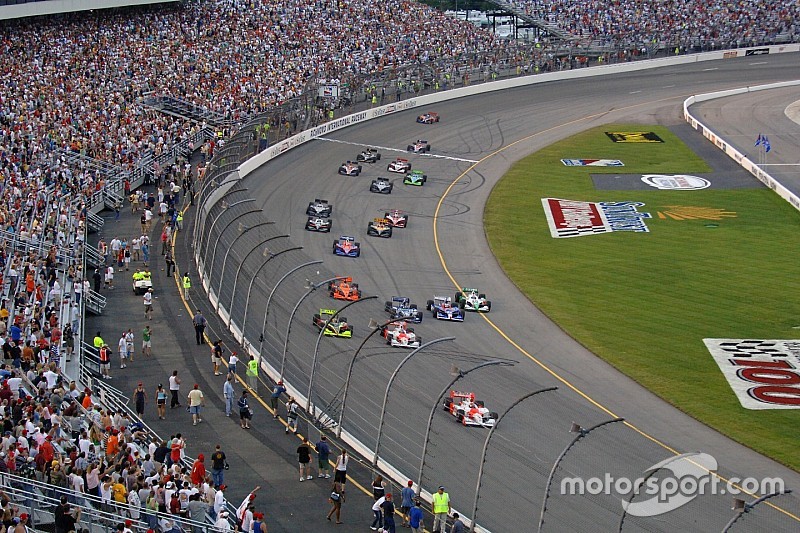 IndyCar president Jay Frye, Tony Kanaan, and Scott Dixon believe next year’s event at Richmond Raceway will feature the kind of racing witnessed at Iowa Speedway over the past couple of seasons, now that the series has the right downforce package to encourage passing.

The NTT IndyCar Series’ return to Richmond sees the 0.75-mile oval effectively replace Pocono Raceway on the 2020 calendar, and will be the first time the top U.S. open-wheel series has competed there since a notoriously poor race in 2009 due to a confluence of circumstances.

The fact that the downforce package allowed cars to be flat-out all the way around meant there was little speed differential between the ace drivers and the backmarkers. This, combined with excessive tire marbles offline, meant that the leaders were afraid to go offline even to make lapping maneuvers, let alone passes.

However, series officials and drivers are confident that the universal aerokit now utilized, combined with Firestones that degrade without sloughing off excess rubber, will make the 10thRichmond IndyCar race a successful one.

“We certainly would expect it to be more like Iowa,” said Frye in a media conference today. “That's one of the things we talked about a lot – the difference between 10 years ago and today, the direction we went.

“With this current car, less downforce, more horsepower coming, look at Iowa the last few years. In '17, we still had the manufacturer [aero]kits that had the high downforce. We had about 300 on-track passes for that event. In '18 we had almost a 1000 with the current car, current configuration.

“We feel good about the direction. We're going to come back in October and have a test with Firestone with a couple cars, then in March with the full field. We're going to make sure we give fans a good show. I think we're going the right way.”

Kanaan, who won the Richmond race in 2008, stated: “Last time we were here, we didn't deliver what the fans wanted. Since Jay and Mark [Miles, CEO of Hulman & Co. which owns IndyCar] came onboard, they've been working extremely hard with Firestone and Dallara to get the right package. I believe we found that. If you guys watched the last two years in Iowa, how the race has been, this track is extremely similar.

I'm not expecting anything less than 800 passes here when we come back. Hopefully I'll pass Scott for the lead on the last lap and I'll win!

“We're going for back-to-back!” responded the five-time champion who scored the last IndyCar victory at Richmond.

“I think the ultimate goal is Iowa. We'll have to see how that progresses. I think there will be a lot of effort that goes in from the tire test in October through to March. But it could take a little while. We'll just have to wait and see. The goal is to have a very similar race to Iowa.

Added Kanaan: I think when we came here the last year we had too much downforce. Everybody was running the same lap time. Once you got to a backmarker, you couldn't do anything about it. That was a combination of a lot of things probably. I don't think I can point out one thing that made the race like that.

“We were going flat out, like full throttle around this little place. Then you go to a race, you're only a tenth or tenth-and-a-half from each other. You can't pass.

“I think we need the tires to go off, you need less downforce, you need the cars to slide, then you're going to see some passing. I even think the side-by-side. I'm not sure but I don't think we had a lot of side-by-side this year: people want to see passing as well. I think the passing is the most important thing. The year we were here last time, it was just too much downforce.”

Asked whether two racing grooves would be possible, Dixon replied, “I think that's the ultimate goal. I think a lot of that is the tire.

“You're searching a lot of the time, right? You find something that works. By the next stint it changes. It's because the tire is pretty highly stressed and you're constantly having to maneuver for the change.

“I think Turns 3 and 4 will be a lot easier to run side-by-side. Definitely tightens up a little bit out of T2, the banking falls off. I think that will create opportunities to dive underneath somebody.

“Tony kind of touched on it: I think tire deg[radation] is really a big thing for great racing. We see that on road, street and ovals.”

Kanaan pointed out that the smoothness of the Richmond oval is in marked contrast to the bumpy 0.894-mile oval in Iowa.

“We ran around the track, it's extremely smooth,” said the 2004 champion. “That is actually quite remarkable. If you go to Iowa, it's completely the opposite – extremely bumpy.

“I think it will be easier to run side-by-side here just because the bumps obviously make the grip go away.”

Frye, Kanaan and Dixon dismissed the idea of using the traction-inducing PJ1 track compound ‘adhesive’ that NASCAR sprays in the turns of some venues to improve the racing. IndyCar’s occasionally-used alternative is a device containing used Firestone tires that gets dragged around behind a tow-truck off the typical racing line, in order to ‘grip up’ an extra lane.

“When you have the best tire in the world, you don't need that [adhesive],” smiled Kanaan. “Firestone makes a good tire. With Firestone helping us, with the tire testing and everything else, I don't think we need any of that artificial stuff to make our race better.

“I think we have a pretty good idea what we need. Obviously Jay can follow up with that. We communicate a lot. I don't think that ever crossed our minds at all.”

Said Dixon:“Kind of what we did at St. Louis [Gateway], a little bit of additional [grip] with the tire dragging – rubber on the high line. I think it definitely gave you much more margin. I actually used it a few times, especially in Turns 3 and 4, because you could run a little bit higher. Yeah, I think [NASCAR’s] approach is something we would not be considering. Iowa we don't. We'll try to do similar things we do in Iowa.”

“We're quite confident in the way the track will race here,” concluded Frye, “based on the data and all the things that we see. We'll come back here in October, come back here in March before just to confirm all of that.”

Whincup crashes out of the Bathurst 1000

Rich Bickle to Drive for Tyler Jet in 1999

Whincup crashes out of the Bathurst 1000

O’Ward to stay with Arrow McLaren SP for 2021