Rob and Chris Dyson are more use to piloting a sports car around the racing tracks, and both father and son have won championships in endurance racing.

Indianapolis, Ind. – On an annual basis, several dozen vintage race car owners are given the opportunity to have their restored race cars driven around the Indianapolis Motor Speedway. This year some three-dozen, immaculately restore roadsters and rear-engine cars were on hand and while most of the cars were driven by their owners, sports car stars Rob and Chris Dyson drove two of the cars.

Rob Dyson said, “This is a dream come true. It is 51 years ago that I was here as a kid, seeing my first Indy 500. I saw a whole bunch for many years before I started racing sports cars, so I never made it back here. And this is my first time in one of these cars.” 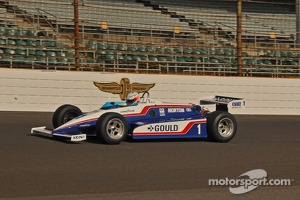 Discussing the legendary race, he added, “The Indianapolis 500 is the most important car race and the greatest racing facility in the world bar none. It has more tradition and history than any other race track on the planet. To be able to get in a car, drive it and experience the corners along with watching the stands and feel the car working while understanding why this place draws people has given me an immense appreciation for what these guys have done.”

Added Chris, “This is my first time to drive around here and the first time to drive one of these cars. Greg Ellif is an old friend of ours from sports car racing, and we reconnected with him a year ago. And then we ran into him again at the ALMS race at Laguna Seca two weeks ago and he told us that the owner couldn’t be at Indianapolis and asked whether we would be interested in showcasing the cars. And who are we to say no. It has been a great experience.” 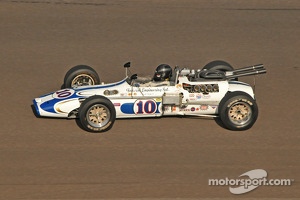 Like a true racer, Rob Dyson said he wished he would have had better tires and gearing in the car to make it go faster. “If we could have put on another set of tires and done other things to the car, I think we could have done a 150 mile per hour lap.”

Although he didn’t know the speed attained, he said he reached 9,000 rpm’s on the back stretch on each lap turned.

The two Dyson's have accomplished lots of success over the years but today’s experience at Indianapolis will be forever etched into their highlight reel.