Rookie Carlos Munoz back on top at Indy 500 practice

Welcome to Indiana-ville as Jay Alley views the happenings at the Indianapolis Motor Speedway. Will the rookie continue his hot pace on Fast Friday?

The Andretti Autosport onslaught continued today during Day 6 of Indy 500 practice as rookie Carlos Munoz ran the fastest lap of the month at 225.163 and teammates Ryan Hunter-Reay and Marco Andretti were close behind. Another rookie also made news at Indy today as Conor Daly found the SAFER barrier in Turn 1 and almost got upside down in his AJ Foyt Enterprises Dallara the first wall-banger of the month. Someone always has to be the first to hit the wall at Indy but I hate that it was Conor.

After five clean days of practice, I joked with a friend that I had jinxed everyone by writing yesterday about how there had been no incidents so far this week. I saw Conor walking out of teammate Takuma Sato's pit when practice closed at 6:00 p.m. and asked him what happened. He simply said "I don't know; we're trying to figure that out." I then asked him if he was OK and he said he was. While he seemed a little down, which is to be expected after crashing, but he still smiled when I took his picture. There's an old racing saying that there are drivers who have hit the wall and those who are going to hit the wall, so now CD knows what that's like at Indy. It's certainly not the first time Conor has crashed a race car in spectacular fashion - last year he almost cleared the catch fencing at Monte Carlo in a GP support race - but hitting the wall at Indy at 220 is something different entirely. It's a tough break for a tough kid and I'm sure Larry Foyt will have him back on track tomorrow going through the whole process of working up to speed again. This setback may prevent Conor from being a Pole Day qualifier, but it won't keep him down for long.

Buddy Lazier got on track in his familiar #91 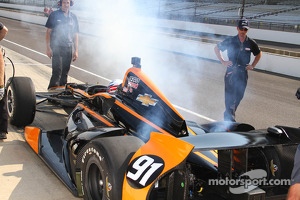 A full field of 33 cars is now assured as the 33rd car finally got on the track today as 1996 Indy 500 winner Buddy Lazier got his Halloween colored car out after some hiccups in the pit lane kept him stationary until after 5:00. A quick shakedown of three laps and Lazier parked it for the day amidst a lot of fan interest along pit road. Lazier won Indy with a broken back in '96 and has always been a fan favorite, having run for Ron Hemelgarn for years. But he hasn't run the 500 since 2008 so he has a learning curve to deal with and a year old car underneath him. Unless Ed Carpenter or Sam Schmidt rolls out their other cars for someone with a suitcase full of cash, Buddy is assured a starting spot in the race so it will be nice to see how his little team fares over these last three days of practice and qualifying. He would be the oldest driver in this year's 500 so I hope he can get up to speed and run competitively.

I couldn't get away from my teaching job until late today so I only got to the track for the last hour of practice but even then it was interesting to see who was doing what. I chose to concentrate on activity along pit lane and there was plenty. I overheard Graham Rahal say his #15 car was starting to respond to changes so even though they have been struggling for speed so far, he sounded optimistic. And then there was AJ Allmendinger, riding the tow cart out with his crew after practice, grousing about someone giving him a chop job on track who he almost ran over, so Fast Friday is shaping up to be very intriguing. With more turbo boost available, will the Honda or Chevy teams benefit more? And who will come to terms the quickest with the handling changes needed to cope with the additional speed the higher boost will provide? And where are the Penske boys? Lurking, I assure you. Are they just sandbagging? We shall see. I can't wait.