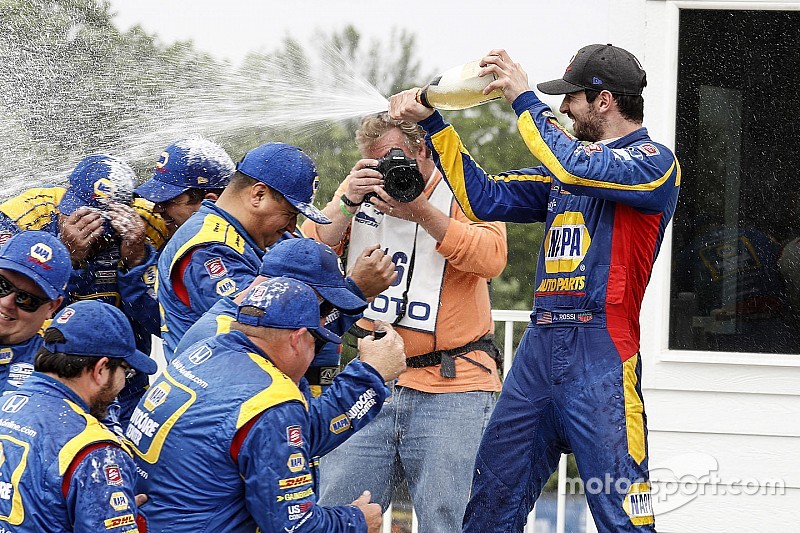 Following a dominant win at Road America, Andretti Autosport-Honda’s Alexander Rossi remained immovable on the subject of which team he will race for next season.

In a race unsullied by caution periods, Rossi led from start to finish, barring pitstops, and passed the checkered flag almost half a minute ahead of his closest challenger, Team Penske-Chevrolet’s Will Power.

In three of the previous four races, Rossi had narrowly missed out on victory to Penske drivers, and since Roger Penske hired Rossi as the ‘third man’ in the #7 Acura ARX-05 for IMSA’s endurance races, the rumors of the 27-year-old also joining The Captain’s IndyCar team have increased. The assumption was that Simon Pagenaud would be either switched full-time to IMSA or let go entirely after a disappointing 2018 season.

However, Pagenaud’s victory in the Indianapolis 500 – just ahead of Rossi, ironically – means he is highly likely to be retained by Penske for at least one more year, so that if Penske wishes to add Rossi, it would be in a fourth car alongside current incumbents Power, Pagenaud and current points leader and 2017 champion Josef Newgarden.

Given that Rossi left the Penske cars in his dust at Road America, as he did at Long Beach in April, Motorsport.com asked him if that weighed into his considerations of where he would race in 2020.

He replied: “I have no considerations.”

Asked ‘None whatsoever?’ he responded: “No”

Motorsport.com then asked him if the decision was in someone else’s hands, and he smiled and said: “It’s in God hands.”

Asked if that god was Roger Penske, Rossi smiled and shook his head.

Rossi’s Road America win was his second of the year and the seventh of his career, which also included finishing runner-up in the 2018 championship. His current team owner Michael Andretti is eager to retain Rossi, but an inside source informed Motorsport.com that the NAPA sponsorship on the #27 car is the least lucrative of the primary sponsors on the four Andretti cars, and that is why Rossi ran in the livery of GESS – Harding Steinbrenner Racing’s primary sponsor – at Texas Motor Speedway earlier this month.

Honda is also keen not to see Rossi join a Chevrolet-powered team, and the links between the Japanese manufacturer and Rossi were once so strong that when Michael Andretti considered switching his squad to Chevy power at the end of 2017, Rossi came within days of signing for Arrow Schmidt Peterson Motorsports. However, it is unclear whether the Honda relationship still runs so deep that it would step up and bridge any shortfall in sponsorship budgets for the #27 car.

Both Power and Newgarden said they would welcome Rossi as a teammate at Penske.

Asked point blank how they would react to his arrival, Newgarden responded: “That would be cool… I think it would be awesome.”

Power added: “Yeah, Josef really wants him as a teammate,” and when quizzed about his own feelings, Power shrugged, “I'm good whatever, man.”

Newgarden interjected: “As long as you're not kicking me out!” and Power concluded, “Yeah, as long as he's not replacing me!”