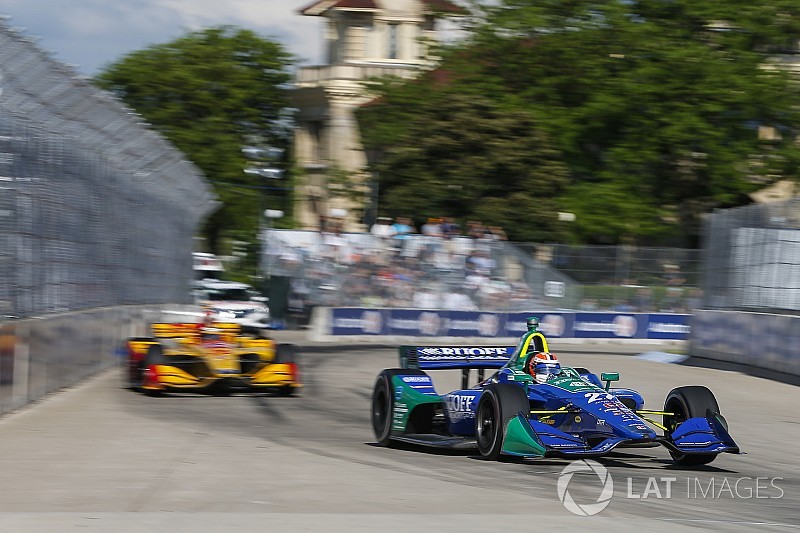 Alexander Rossi says that the mistake that cost him a near-certain second place in the Detroit GP’s second race lay with his own driving, but that he was never going to just move over and let teammate Ryan Hunter-Reay past.

The third-year IndyCar driver, who came into the second race holding the championship lead, took pole and, using a two-stop strategy, led 46 of the first 63 laps in the 70-lap event.

However, Andretti Autosport teammate Hunter-Reay, setting ultra-quick lap times and on a three-stop strategy, slashed into Rossi’s lead in his closing stint, and while under pressure from the 2012 series champion, Rossi locked up and skated down the Turn 3 escape road.

The lockup was bad enough that his front tires delaminated and he had to limp back to the pits, rejoining 13th and finishing in 12th. He lost the lead of the championship, and second place, to Will Power (Penske) and Scott Dixon (Ganassi), who finished second and fourth respectively on the day.

Immediately after the race, Rossi was at a loss to explain why the situation had occurred, but on Monday conceded that he’d been at fault.

He told Motorsport.com: “I was hoping for a different answer but at the end of the day, the problem was with Alex!

“It was a combination of using the front tires really hard in the race – I didn’t have the pace of Ryan and we couldn’t dial out our understeer – and taking a very slightly defensive line to that corner. I unloaded the left-front so it locked up when I hit the brakes. I didn’t really acknowledge it the first time because I hadn’t recognized that my line, which was a couple of feet more to the right, meant I ran over a seam. It’s pretty unusual to get a lock-up on the outside tire, so that caught me by surprise, but there wasn’t a flatspot first time around; the lockup had been really minor and I got no vibration from it, so I just regarded it as an anomaly.

“So next time around, Ryan was a little further back so I backed it up to braking where I had for one-and-three-quarters of the racing over the  weekend. This time it locked even harder because it was caused by the bump I was now hitting, both fronts locked, and that’s when I headed down the runoff.”

Rossi acknowledges that thinking big picture, as advised by his strategist and Andretti Autosport team manager Rob Edwards while Hunter-Reay was closing in, had not been on his agenda and that he may have cause to regret that.

“You kick yourself because that was gonna be an easy second place,” he said, “and I’d have gotten 44 points instead of 22, because no way Will was gonna catch me. So I should have just let Ryan go and we’d be leading the championship. But when you’re racing…

“It’s about finding that balance, and I didn’t find a good balance in managing risk because in that moment I just wanted to win.  I don’t like second place; as important as podium finishes can be for championships, I just want to win races.

“So in hindsight it was a big error because we could have been heading to Texas with a 16-point lead in the championship instead of being 11 points behind Will. But on the other hand, we started on pole, we led most of the race, and I was still leading with less than 10 laps to go. I’m not going to let the work of everyone on the #27 side of the team go by the wayside with what was a good car – not the best, but a good one. “Conceding a win is just not going to happen, not even after what we’ve just experienced. But maybe the mindset that will change is that if there’s no threat other than the car you’re fighting with for the win, then maybe there’s a situation where you race as hard as you can but there’s no defensive line taken – if he has a run on you, then so be it.

“I’ve done that in the past, when you’re trying not to lose too much time by fighting. But it’s never been for a win before – that was the difference. If there’d been someone in front of us and Ryan and I had been fighting for second, then I’d have given it up more easily, absolutely.”