Rossi didn’t have enough fuel to tackle Newgarden for second 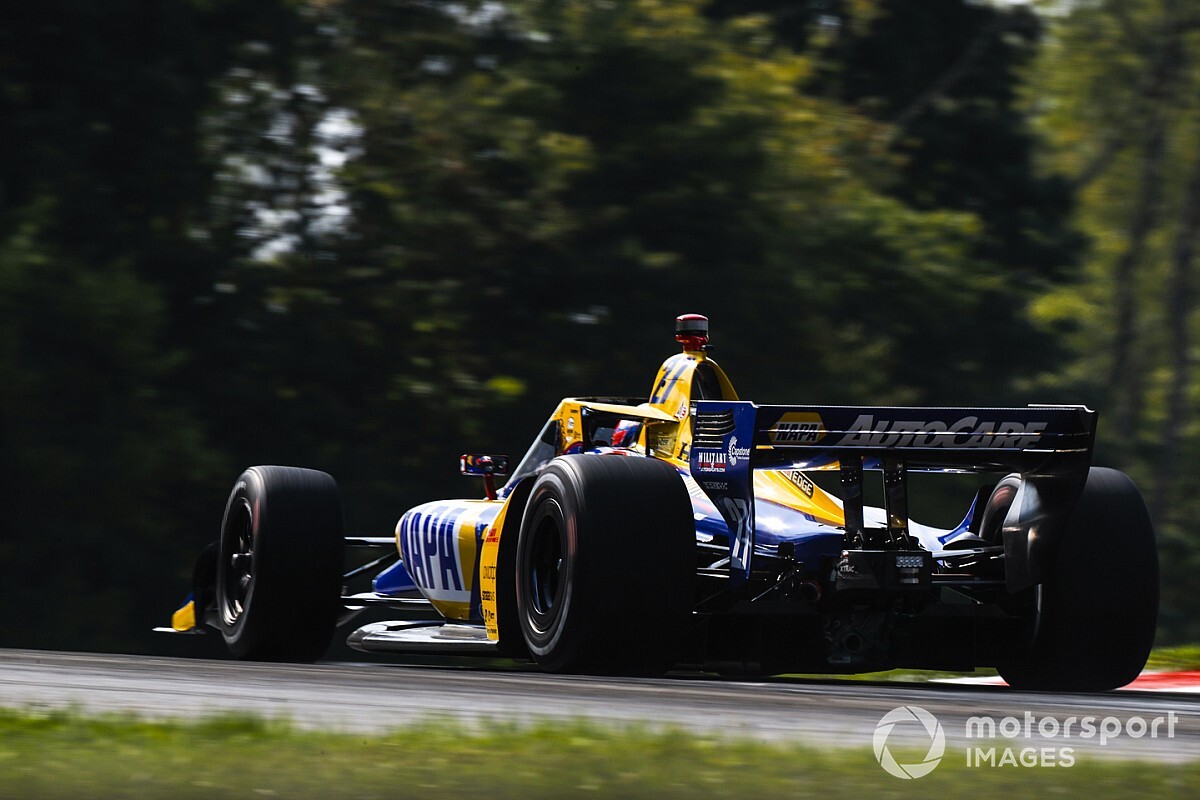 Alexander Rossi revealed a slightly early final stop to jump him ahead of Andretti Autosport-Honda teammate Ryan Hunter-Reay left him unable to take on Josef Newgarden and gave him a struggle to hold onto third place.

Alexander Rossi was the highest qualifier to start on Firestone’s harder-compound tires, and he immediately gained a spot from the start to grab fifth from Meyer Shank Racing’s Jack Harvey, so he was running behind the Penske Chevrolets of Will Power and Josef Newgarden, Hunter-Reay and Conor Daly’s Ed Carpenter Racing-Chevy.

However, at the first round of stops, although he moved up as Daly fell back, Rossi found he couldn’t take advantage of the switch to the softer Firestone ‘reds’ to move past Hunter-Reay for third, although he kept pressing him.

Thus Rossi ducked into the pits for fresh blacks for the final stint one lap before his teammate and produced a strong out-lap. Hunter-Reay emerged from pitlane ahead but Rossi had momentum on the straight down to Turn 2, and moved up to the final podium spot.

Still, that early final stop meant Rossi was unable to hit the push-to-pass boost to try and get on terms with Newgarden, and meant he was struggling to stay ahead of Graham Rahal’s Rahal Letterman Lanigan Honda.

“We got held up there in the middle stint a little bit, maybe could have gotten second, but nonetheless, with the year that we've had, we'll take a podium,” said the 2018 Mid-Ohio winner. “And the good thing is we get to do it all again tomorrow.

“We have a good platform underneath us. The team is doing a good job, so hopefully we can do a little better tomorrow…

“I think that had we qualified a little bit better we could have maybe challenged for a win, but regardless I think we're there or thereabouts…Like I said, I think maybe we could have gone one better today, but we just didn't get through the traffic as good as we needed to.

“It was pretty tough there with Graham. We didn't have the fuel to fight Josef, but it was important for us to try and jump Ryan, and it worked out for us, but then we were on the defensive for sure. So it was just about saving as much as we could without losing the spot to Graham, which was hard, but ultimately we had the car to do it, so glad we got it done.”

For his part Hunter-Reay, felt his car was lacking grip – and was puzzled by Rahal’s emergence in fourth.

“We were just missing a little bit of grip today, which was unfortunate,” said the 2014 IndyCar champion who started the race from the front row. “We were sliding around all day, especially that last stint.

“But it was close. We just missed it on the pit cycle there with the #27. We came out just behind [Alexander Rossi] and then I was fighting it out with [Felix] Rosenqvist from there.

“I have no idea how Rahal got up there so it must have been through the pit cycle.

“We need to do some things to the car for tomorrow’s race because I was sliding around out there for sure. Hopefully we get this #28 DHL Honda further up front tomorrow.”