Alexander Rossi says he’s pleased that he and Andretti Autosport-Honda this year eradicated errors that hurt their 2018 IndyCar campaign, but feels the team lost out to Penske-Chevrolet due to a lack of pace in the season’s second half. 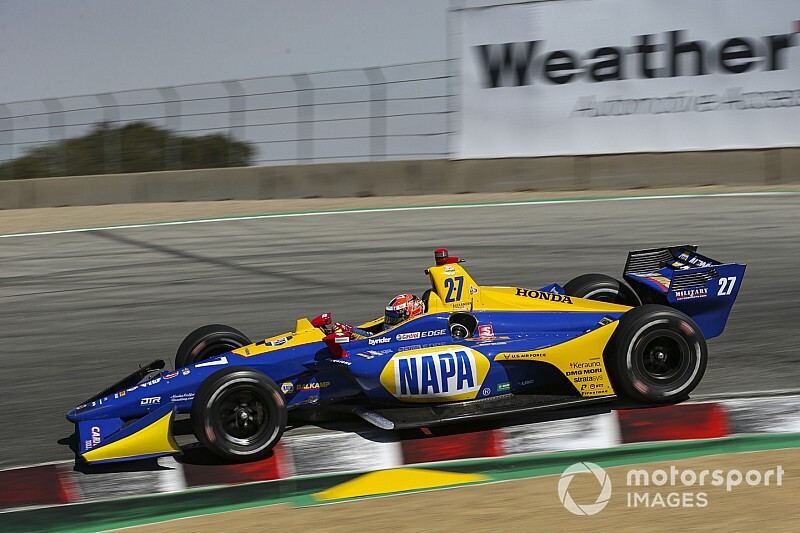 Rossi, who last year finished runner-up in the title fight to Scott Dixon and Chip Ganassi Racing-Honda, this year was beaten this season by both Josef Newgarden and Simon Pagenaud from Team Penske.

Both AA victories came from Rossi when he utterly dominated the races at Long Beach and Road America, but while Rossi accrued five other podium finishes, at least two of those were races in which primary title rival Newgarden was jumped ahead of him through strategy.

Ultimately, he failed to lead a lap in the second half of the season and when the Takuma Sato-triggered collision on Lap 1 at Pocono caught Rossi among its victims, the Andretti driver was on the back foot championship-wise

Rossi told Motorsport.com: “I believe I made fewer mistakes this year, which was a big focus for me and the team as a whole. Starting with myself, the aim for this year was to clean up unforced errors and not throw away points, and that’s what happened.

“Also, my qualifying average improved over last year so I think we executed in terms of car performance on Saturdays better than before. Ultimately I think we came up short as a team at the end, although there was no specific event where you’d say we were terrible. Pocono killed us [involved in the Lap 1 shunt], and Gateway was disappointing.

“But I think the pace was missing in the final races of the season. In fact, that’s what the big focus is this winter – finding out where the pace went in the second half of the year after we won at Road America.

It’s further evidence how close the series is; just because you were good somewhere last year didn’t mean you’d be fighting for the win this year. As a unit, we made fewer mistakes but ultimately we just weren’t fast enough.”

From the Toronto race onward, Chevrolet made noticeable improvements in its power, torque for road/street course races and also fuel economy, but Rossi isn’t blaming Honda for the dwindling momentum in his championship quest.

“I haven’t really seen the analysis because ultimately that was out of our control and so there’s not a lot we could do about it.

“Looking purely at the handling side of it, there were a lot of setup philosophies we got almost too carried away with and distracted by, and I don’t think our sim program was where it should be. That isn’t really anyone’s fault, but after a couple of ‘off’ races, we went looking for a silver bullet solution and it never transpired. Then at the same time, Penske got really strong and we just couldn’t beat them.”

Penske’s improving through the second half of the season wasn’t unexpected – such is the nature of all the best teams in the series – but it meant that earlier missed opportunities in the season hurt more. And they weren’t the result of Andretti Autosport CEO and Rossi’s tactician Rob Edwards making strategic errors. It was just that in a couple of events – Detroit Race 1 and at Texas Motor Speedway – full-course cautions meshed perfectly with Penske president Tim Cindric’s tactics for Newgarden.

“That’s a good point,” agrees Rossi. “Hindsight really is 20-20. But at the same time, when you have a good car, the best car, you have to win because it’s so difficult. I think we had the best car in Indy and Detroit Race 1 and Texas and we didn’t win any of those. Had we done so, I think the second half of the season could have looked a lot better; we’d have had a [points] cushion.

“But when we needed the car to be fast to compensate for those losses, we just didn’t have it; we were third at Portland in a very average car, where we were missing three-tenths of a second the whole weekend. And although I did feel we made the best of it, that third place was just a result of the car being not quite good enough to threaten Will [Power] and Felix [Rosenqvist of Chip Ganassi Racing].

“If you look at the season as a whole, I think we did a better job than the year before. The pace just wasn’t there in the car.”

Questioned whether he was at least satisfied by his own performances and whether he felt his driving improved, Rossi remained self-critical.

“I think the whole team did a better job of executing on race days but ultimately we just didn’t have the pace of Penske cars at the end of the year. Whether that was a sign of Chevy improving or a setup philosophy they found, or tracks that were more in their favor, that just happened to be stacked at the end of the year, I don’t know. I just think at the racetrack we didn’t do anything particularly wrong – we just got beat.”

Asked if he derived satisfaction from being able to at last beat Dixon in the championship and therefore finish as top Honda driver, Rossi replied: "No. Nice try though – thanks!

"Truthfully, none of us drivers are designed to be satisfied with second or third or 'best in class'. It's all about winning."

Palou: IndyCar ride “a dream” for the last two years